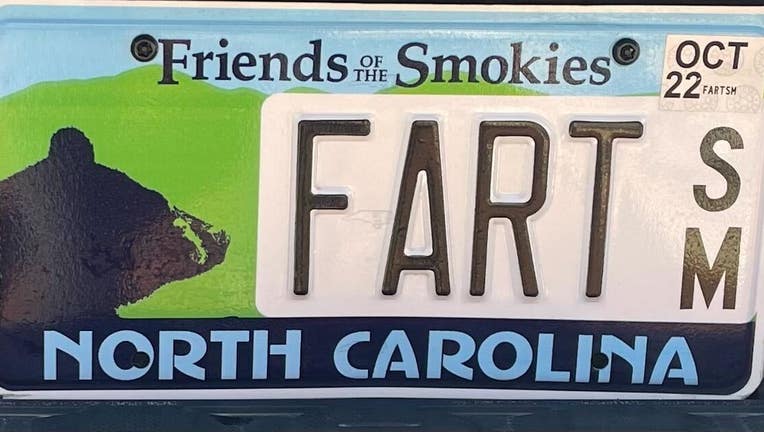 ASHEVILLE, N.C. - A North Carolina woman is fighting to keep her ‘FART’ vanity license plate after the DMV issued it to her but then said it might be recalled.

Karly Sindy, 37, of Asheville, North Carolina, said she requested her license plate last October and received it in November.

"I was re-registering my truck online and it had the option to customize my plate so on a whim I tried FART," Sindy told FOX Television Stations. "I was excited and surprised it was available."

The DMV later informed her that someone had complained about their vanity license plate and asked her why she chose the word. The DMV notified Sindy that she had 30 days to respond.

That’s when Sindy got more clever, turning the word into the acronym, "F.A.R.T."

"After I received the letter I went on Reddit in r/Asheville asking for help in response to the letter," she continued. "Someone suggested Friends of Asheville Recreational Trails and to build a website."

"I loved the idea because I love hiking, biking, and spending time outdoors," she added.

Sindy did launch a website and even organized a group hike.

"FART may not have started out representing Friends of Asheville Recreational Trails, but it certainly does now!" she explained.

Sindy has even made stickers and shirts out of suggested designs from her group members and will donate the proceeds to a local charity.

RELATED: Fliers left on cars in Florida with New York plates, tell them to leave state if they are 'woke'

But it’s still a question as to whether the DMV would let her keep her license plate. She recently sent a letter to the DMV explaining her acronym and is awaiting its decision.

"The personalized text in question has been on our denied list for some time and was mistakenly issued," DMV spokesperson Marty Homan told FOX Television Stations. "It is currently under review."

According to the Charlotte Observer, there are multiple banned license plate names that are deemed offensive. Some examples include "SATAN," "DUKEEY," and "P0THED."