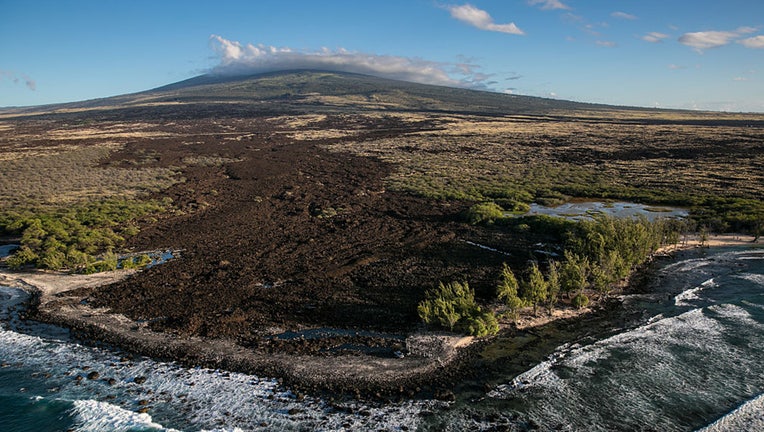 FILE - A deserted beach at the edge on an old Mauna Loa lava flow is viewed on Dec. 16, 2016, in this aerial photo taken along the Kona Kohala Coast, Hawaii. (George Rose/Getty Images)

HONOLULU - Hawaii officials are warning residents of the Big Island that the world’s largest active volcano, Mauna Loa, is sending signals that it may erupt.

Although an eruption isn’t imminent, scientists are on alert because of a recent spike in earthquakes at the volcano’s summit. Experts say it would take just a few hours for lava to reach homes closest to vents on the volcano, which last erupted in 1984.

"Mauna Loa makes up 51% of the Hawaii Island landmass. So anywhere within that 51% could be impacted by an eruption," said Talmadge Magno, the administrator for Hawaii County Civil Defense. "Not to panic everybody, but they have to be aware of that you live on the slopes of Mauna Loa. There’s a potential for some kind of lava disaster."

Mauna Loa, rising 13,679 feet (4,169 meters) above sea level, is the much larger neighbor to Kilauea volcano, which erupted in a residential neighborhood and destroyed 700 homes in 2018.

Its slopes are much steeper than Kilauea’s so when it erupts, its lava can flow downhill much faster. During a 1950 eruption, the mountain’s Honokua lava flow traveled 15 miles (24 kilometers) to the ocean in less than three hours.

The Hawaiian Volcano Observatory, which is part of the U.S. Geological Survey, said Mauna Loa has been in a state of "heightened unrest" since the middle of last month when the number of summit earthquakes jumped from 10 to 20 per day to 40 to 50 per day.

Scientists believe more earthquakes are occurring because more magma is flowing into Mauna Loa's summit reservoir system from the hot spot under the earth's surface that feeds molten rock to Hawaii's volcanoes.

The temblors have declined in frequency in recent days but could rise again.