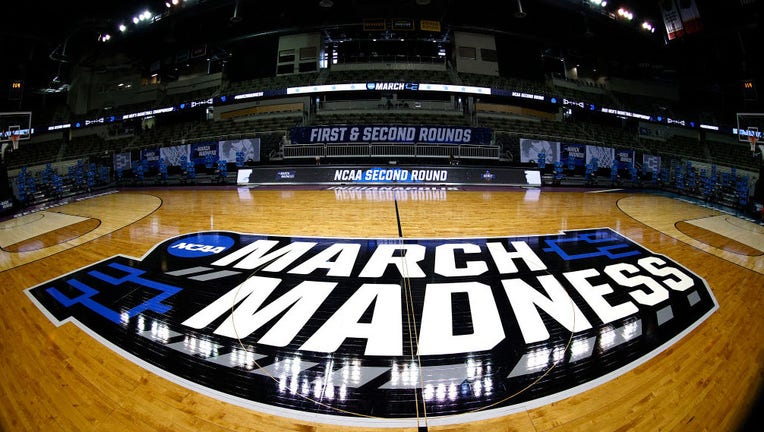 A general view of the March Madness logo on center court is seen before a second round game in 2021. (Photo by Maddie Meyer/Getty Images)

WASHINGTON - The 2022 NCAA Tournament bracket is solidified and fans across the nation are filling out their brackets and making plans to watch their favorite school compete for college basketball’s crown jewel, a national championship. A panel made their picks for the deserving teams during Selection Sunday once all the conference tournaments ended.

Here’s what you need to know about the tournament:

Gonzaga, Arizona, Kansas and defending champion Baylor all earned number one seeds in the NCAA Tournament.

Early round games in the 68-team tournament start Tuesday with the First Four.

The Last Four teams to make it into the NCAA Tournament are Indiana, Notre Dame, Rutgers, and Wyoming.

Dayton, Oklahoma, SMU and Texas A&M were the "first four out," meaning there's still a chance for them if a team must make a late withdrawal due to COVID-19.

Notre Dame, Indiana, and Michigan punched their ticket to the tournament Sunday. The Big Ten has a nation-leading nine teams playing in the tournament, That's the same number as last season, but the conference only moved one team to the second weekend. The Big East, Big 12 and Southeastern Conference (SEC) sent six teams each from their conferences.

Teams that just slipped in included No. 12 seeds Wyoming and Indiana. Other teams to watch in this year's tournament include Villanova, Illinois, Tennessee, Houston, Auburn, Iowa, Providence, Wisconsin, USC, and Ohio State.

Duke is back in the big dance as a no. 2 seed in the tournament. Coach Mike Krzyzewski's last tournament has the Blue Devils playing in the super-stacked West bracket, meaning he might have to get past Gonzaga in the regional final to make his 13th Final Four.

Early round games in the 68-team tournament start Tuesday with the First Four.

Where to watch 2022 NCAA Tournament games

March Madness 2022 marks the return to the first "normal" tournament since 2019, with teams scattering to jam-packed arenas in eight cities for the first weekend, then to four different destinations for Sweet 16 before the fun ends in the Big Easy for the semifinals and title game.

The tournament was scratched in 2020 due to the then-erupting COVID-19 pandemic. Last year, all the teams played in front of limited crowds in a makeshift bubble in and around Indianapolis. One thing that remains the same: Last year's finalists, Gonzaga and Baylor, are top seeds, with the Zags favored to win the title.