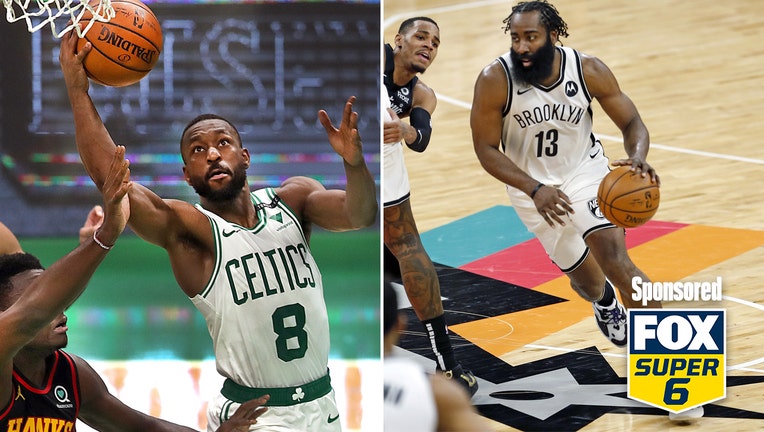 The NBA had a soft re-launch to the second half of the season Wednesday night, but there’s a massive slate of games on Thursday, highlighted by a possible Eastern Conference finals preview between the Boston Celtics and Brooklyn Nets.

Here’s a breakdown of this week's Super 6 games:

Detroit has the fewest wins in the East, and the Pistons limped to the break with their best player (Jerami Grant) injured and their point guard (Delon Wright) hurt, too. They're cobbling together veteran journeymen (Rodney McGruder, Wayne Ellington) with young talent (Josh Jackson, Sekou Doumbouya, Saddiq Bey), and the result is painful to watch.

The Hornets are likely playoff-bound behind ROY lock LaMelo Ball and six others who average double-digit scoring. Dennis Smith — if he starts again for Delon Wright — will come hard at Ball, but ultimately, that backfires.

The Nets, who are small favorites (-2.5), won’t have the services of Blake Griffin as he gets back in basketball shape after four weeks off.

The Celtics, who have won four in a row, were one of my "BUY" teams in the 2nd half, and this isn’t a bad place to start backing them. Kevin Durant is still about a week away for the Nets, but Marcus Smart of the Celtics is expected to see his first action and weeks.

No team matches up better with Brooklyn on the perimeter than the Nets. I suspect in crunch time, we’ll see Jaylen Brown on James Harden, trying to nullify his playmaking ability. Ignore the Christmas Day beatdown, when the Nets won by 28. Durant played, and the Celtics didn’t have Kemba Walker.

The second-half schedule is extremely challenging for New York, which opens with four straight road games, three coming against the best teams in the East (Milwaukee, Brooklyn, Philadelphia). The Knicks crushed the Bucks in the first week of the season, but now they face one of the hottest teams in the league, as Milwaukee has won six of seven.

The Bucks are huge favorites (-11) for a reason.

You want to believe in the Bulls, who have one of the most exciting players in the league this season in Zach LaVine (28.7 points per game on 52/43/85 shooting), but if the wheels fall off early in the second half, they could be active on the trade market.

I do think the Bulls keep things interesting in March, and LaVine — who leads the NBA in clutch time points — is the reason. He’s a nightmare matchup for the 76ers, who’ll be without stars Ben Simmons and Joel Embiid for contact tracing. That’s why the Bulls are favored by two.

Embiid gave the Bulls a 50-piece last month in a narrow win, but where does the scoring come from here for Philly?

The Thunder, one of the worst teams in the NBA, catch the Mavs on the second night of a back-to-back to open the second half. The Thunder are last in the NBA in offensive efficiency, but ninth in defense. They match up well with Dallas, as physical Lu Dort will draw Luka Doncic.

Dallas — without Doncic — held the Thunder to 78 points in a meeting before the All-Star break. Different day, same story.

Clippers fans point out the team ranks second in offensive efficiency. They say the "clutch time" stats — LA is dead last in the NBA in defensive rating in that department — are a tiny sample size.

Be that as it may, something feels off about the fourth seed in the West. They rank in the bottom half of the league in passes made and assists per game. Contrast that with how free-flowing Golden State’s offense is.

The teams split a home-and-away in January. The Clippers looked weary heading into the break, losing four of five (all on the road), and they’re favored by 7.5 here. After this home game, they go on the road for three more.