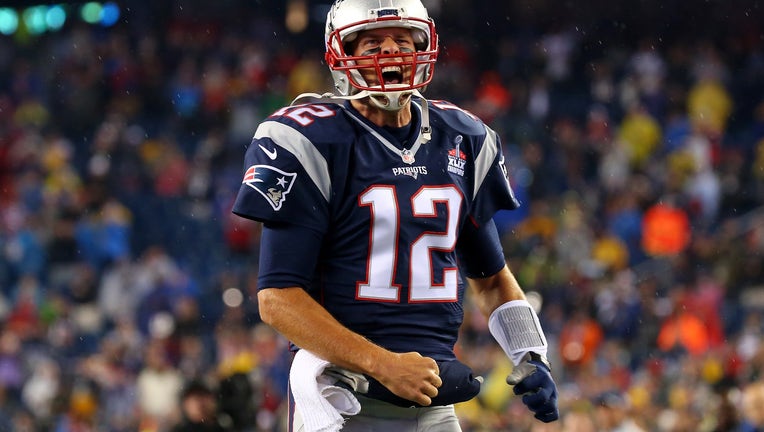 FOXBORO, MA - SEPTEMBER 10: Tom Brady #12 of the New England Patriots cheers as he runs on to the field before the game against the Pittsburgh Steelers at Gillette Stadium on September 10, 2015 in Foxboro, Massachusetts. (Photo by Jim Rogash/Getty Im

Tom Brady, the centerpiece of the New England Patriots, championship dynasty over the past two decades, is poised to leave the only football home he has ever had.

In a two-part message, Brady thanked the Patriots and the fans and said: “FOREVER A PATRIOT.”

“I don't know what my football future holds, but it is time for me to open a new stage for my life and my career,” he wrote. “Although my football journey will take place elsewhere, I appreciate everything that we have achieved and am grateful for our incredible TEAM experiences.”

The one-year contract Brady signed before last season expires Wednesday afternoon, and his agent could negotiate a deal with another team on Tuesday, though it can’t be official yet. He actually could still work out a new deal with New England, but his Instagram post suggests that won’t happen.

Comments by Patriots owner Robert Kraft to ESPN make that clear, too. Kraft told ESPN that Brady reached out to him Monday night and went to the owner's house.

"We had a positive, respectful discussion," Kraft said. “It's not the way I want it to end, but I want him to do what is in his best personal interest. After 20 years with us, he has earned that right. I love him like a son.”

A four-time Super Bowl Most Valuable Player and three-time league MVP, Brady has been the enduring face of the Patriots during a run that added another layer to Boston’s already rich sports history. Only Bill Russell, who won 11 NBA championship rings in the 1950s and 60s with the Celtics, has won more titles as a member of one of New England’s four major professional sports teams.

Brady would be the oldest starting quarterback in the league at 43 at the beginning of next season. It's unclear where exactly Brady will head next, but the Tampa Bay Buccaneers have been rumored as a favorite.

"I want to say thank you for the past twenty years of my life and the daily commitment to winning and creating a winning culture built on great values. I am grateful for all that you have taught me - I have learned from everyone."

Brady arguably is coming off his worst non-injury season. He threw for 4,057 yards and 24 touchdowns in 2019, with eight interceptions. But he completed fewer than 56% of his passes six times in the final eight games of the year, including a season-ending loss to Miami that cost the Patriots a first-round playoff bye.

They lost at home to the Titans in the wild-card round, Brady’s earliest postseason exit in a decade — and likely his last game in a Patriots uniform.

Brady had a one-year contract for 2019 that paid him $23 million, placing him 10th among starting quarterbacks. It was the latest renegotiation by Brady to help give the Patriots salary cap flexibility to fill out the roster.

The chief decision-maker in player personnel decisions, Patriots coach Bill Belichick hasn't been shy about moving on from players he felt were past their prime or seeking contracts that exceeded value in relation to their age. Belichick has severed ties with players much younger than Brady during his time in New England.

But Belichick also acknowledged in January that Brady was a special case.

“Everybody's situation is different," Belichick said. "Certainly, Tom is an iconic figure in this organization. And nobody respects Tom more than I do.”