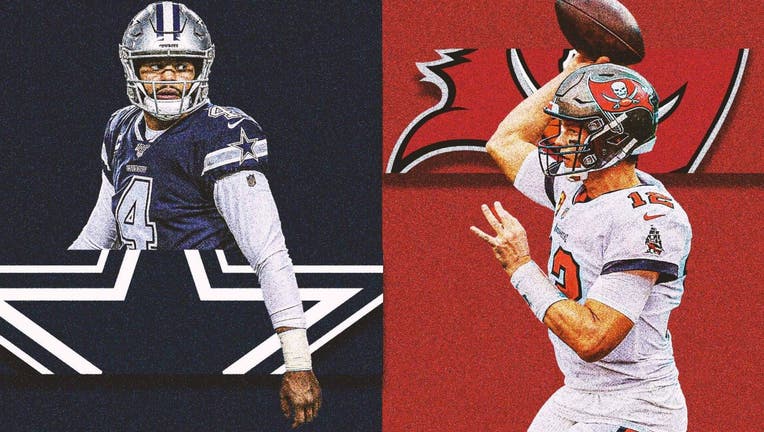 OPENING LINE: Buccaneers by 6 1/2, according to FanDuel SportsBook

COWBOYS PLAYER TO WATCH: QB Dak Prescott is set to play in a game for the first time since the severe ankle injury that ended his 2020 season last October. He didn’t play in the preseason after straining his right shoulder early in training camp. The limitations on his throwing were lifted about two weeks before the opener.

BUCCANEERS PLAYER TO WATCH: QB Tom Brady begins his second season with the Bucs, first with the benefit of a full training camp. Despite not having a normal offseason to prepare, the seven-time Super Bowl winner threw for 4,633 yards and 40 regular-season touchdowns in 2020. He threw for another 1,061 yards and 10 TDs vs. three interceptions in the postseason.

KEY MATCHUP: Brady and a wealth of offensive playmakers vs. a revamped Cowboys defense directed by Dan Quinn, who was fired midseason a year ago as coach in Atlanta. Dallas used eight of its 11 draft picks on defense, beginning with LB Micah Parsons at No. 12 overall.

KEY INJURIES: Cowboys RG Zack Martin tested positive for COVID-19 five days before the game, and coach Mike McCarthy said Monday the four-time All-Pro was "as close to being out as you could possibly rule out." ... RT La’el Collins has been battling a neck injury in the preseason after missing all of last season because of a hip problem that required surgery. Collins was a full participant in practice on the first injury report of the season. ... Bucs S Jordan Whitehead, slowed by a hamstring injury, likely will miss the opener. WR Chris Godwin (quad) was limited in practice Tuesday, but is expected to play.

SERIES NOTES: It’s the third time these teams have opened the season against each other. Dallas won at home in 2001, and Tampa returned the favor in 2009. ... The Cowboys have won seven of the past eight meetings. The Bucs won three in a row after an 0-8 start in the series. Dallas took both postseason meetings between the teams, winning at Texas Stadium in January 1982 and 1983.

STATS AND STUFF: Cowboys RB Ezekiel Elliott’s career high of 159 yards rushing came in a 26-20 win over Tampa Bay as a rookie in 2016, when he was an All-Pro and won the first of his two rushing titles. ... The Cowboys averaged 480 yards, including 381 passing, through five weeks with Prescott last season. In the 11 games after the injury, Dallas averaged 319 yards, with 205 passing. ... Dallas gave up a franchise-record 307 yards rushing to Cleveland last season and was on track to allow at least 300 again late in the year when Baltimore settled for 294 in a blowout victory. The Cowboys were 31st against the run while allowing a franchise-record 473 points (29.6 per game). ... The Bucs led the league in rushing defense each of the past two seasons and are tied for fourth with 53 takeaways since the start of 2019. The Steelers (65), Patriots (58) and Seahawks (54) are the only teams with more. ... Over the final eight quarters Brady played during the 2020 regular season, Brady threw for 1,067 yards, 10 TDs and one interception.

FANTASY TIP: Brady is 5-0 with 10 TDs passing in five career games vs. Dallas. Mike Evans set a Bucs single-season record with 13 scoring receptions in his first season with Brady. The eighth-year pro is the only player in NFL history to begin a career with seven consecutive seasons with at least 1,000 yards receiving. Evans has 18 receptions, averaged 91.7 yards per game and scored one TD in three career outings against the Cowboys.