Dan Miller, T.J. Lang and Chris Burke breakdown round one of the Lions draft.

DETROIT (FOX 2) - With the No. 2 overall pick in the 2022 NFL Draft, the Detroit Lions have selected defensive end Aidan Hutchinson out of the University of Michigan.

The Lions traded up to pick No. 12 to draft wide receiver Jameson Williams of Alabama. Williams is a speed threat coming off a torn ACL injury. 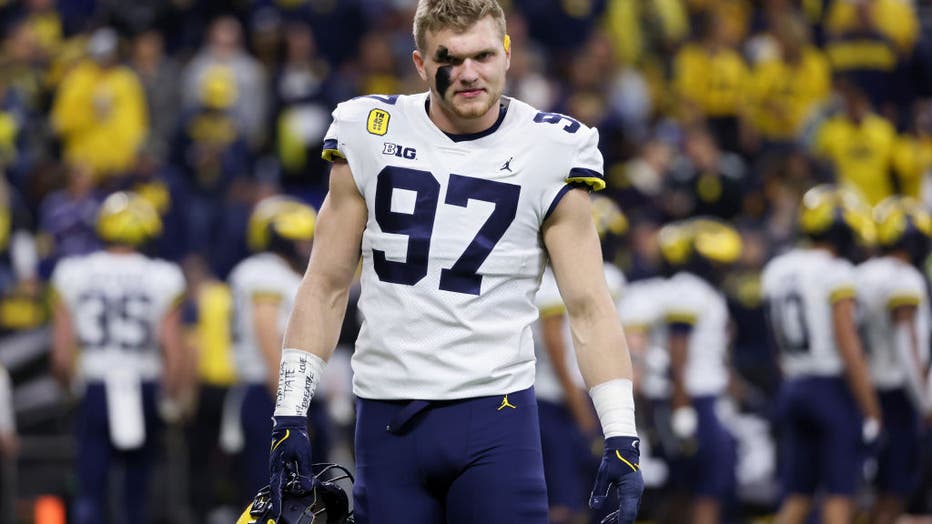 Aidan Hutchinson #97 of the Michigan Wolverines looks on before the Big Ten Championship game against the Iowa Hawkeyes at Lucas Oil Stadium on December 04, 2021 in Indianapolis, Indiana. (Photo by Dylan Buell/Getty Images)

The Lions traded with the Minnesota Vikings sending picks No. 32 at the end of the first round, 34 - the second pick of the second round, and pick 66. Detroit also receives pick 46 in the second round from the Vikings.

The selection of Hutchinson this high up should surprise nobody as he was a Heisman Trophy finalist last year in Ann Arbor. But the fact that he was even available at the second spot - that's the part that may surprise many. 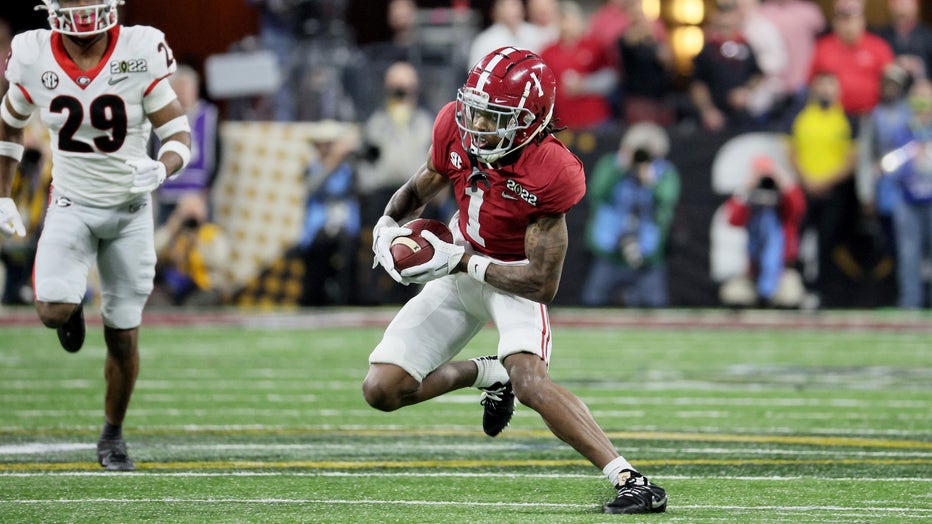 "It feels great to be home once again," Hutchinson said in a media briefing streamed on Twitter by the Lions. "I picked Michigan when I was in hs and to have the opportunity to be home and play in front of some of the same fans, I can't tell you how excited I am.

"To the city, just know that I am going to be giving it my all. It was such an honor to be on that stage and to be picked by the Lions. It was the Lions all the way.  For the whole draft process, I wanted them to pick me. I am so grateful I went No. 2 to them."

Williams in 2021 pulled in 79 receptions for 1,572 yards and 15 touchdowns before suffering his knee injury in the national title game.

Hutchinson was long thought to be the No. 1 overall pick for the Jacksonville Jaguars. But another defensive end, Travon Walker, rocketed up draft boards thanks to a great pro day and his performance at the NFL combine. Walker went to the Jaguars with the top pick overall.

"To the city, just know that I am going to be giving it my all," - Aidan Hutchinson

This will be a homecoming - or rather, a home staying - for the Plymouth native who registered 62 tackles and a school record 14 sacks in 2021 for the Michigan Wolverines as he led the team to its first Big Ten Championship in more than 20 years and its first berth in the College Football Playoff.

"I am going to give it everything I got, and I am going to be happy with the outcome either way," he said. "I don't feel a whole lot of pressure, I think it is great coming back home, staying close to family, it is going to make the transition easier. It's going to be a very good time."

Hutchinson, a Dearborn Divine Child graduate, is the son of former Michigan standout and All-American Chris Hutchinson, who played on the defensive line from 1989 to 1992.

Many NFL writers and scouts believe Hutchinson is the most NFL-ready player in the 2022 draft. NFL experts think he will notch double-digit sacks every year.

Romeo Okwara last did that for the lions in 2020 when he pulled in 10 sacks. He played just four games in 2021 after an Achilles injury ended his season early.

A healthy Okwara on one side and Hutchinson on the other will create a formidable front for the Lions.

The addition of Hutchinson is an incredible get for GM Brad Holmes and head coach Dan Campbell. The Lions are moving to a 4-3 base defense and Hutchinson's addition should immediately make an impact to put pressure on the quarterback.