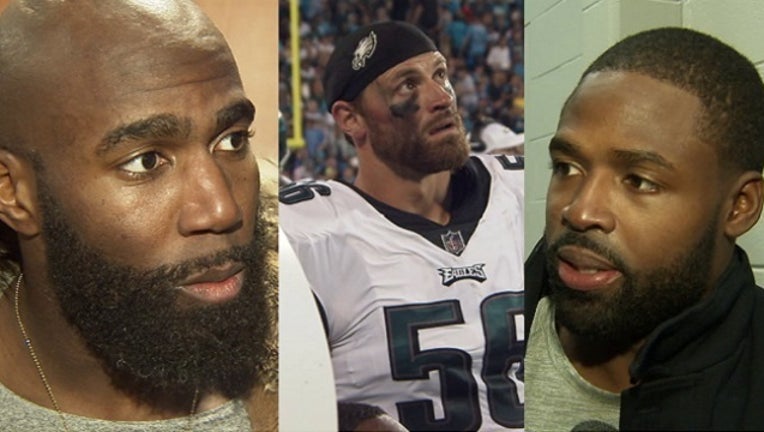 PHILADELPHIA (WTXF) - With the Philadelphia Eagles finishing the 2017 season with a Super Bowl title, many people have turned their attention to the celebrations to come.

While most are focused on Thursday’s Super Bowl parade down Broad Street, some are looking further down the road to the Eagles potential White House visit.

After a number of New England Patriots skipped the annual Super Bowl Championship visit to the White House last year, President Trump revoked an invitation to the NBA Champion Golden State Warriors after a number of their players discussed their intentions to turn down the invitation.

This year, at least three Philadelphia Eagles players have announced their plans to skip the annual White House visit.

Those players include safety Malcolm Jenkins, wide receiver Torrey Smith, and defensive end Chris Long. Long, who gave his entire regular season salary to charity, skipped the visit as a member of the Patriots last year along with running back LeGarrette Blount, who has not yet said whether or not he would attend this year.

In an appearance on CNN, Jenkins said he did not “anticipate” attending the visit to the White House.

"No, I'm not going to the White House," Long responded, "Are you kidding me?"

Torrey Smith, who played the previous two seasons in San Francisco as a teammate of Colin Kaepernick, also vowed to skip a White House visit if the Eagles won.

Long and Jenkins made headlines together multiple times earlier in the year after Jenkins raised a fist during the National Anthem in the beginning of the season. Eventually, Long stood by his side during the anthem with his arm around him in a show of support and unity.

Jenkins, a Walter Payton Man of the Year finalist, announced he would no longer raise his fist during the anthem in December in after the NFL and the Players’ Coalition made a tentative deal to fund social justice issues.

Jenkins, Smith, and Long were also active in the community and in working with the NFL and state lawmakers to discuss criminal justice reform.

Back in October, just hours after beating the Washington Redskins in a Monday night game, the trio took a train to Harrisburg to meet with state lawmakers.

In September, all three, along with safety Rodney McLeod, met with Philadelphia community leaders including Police Commissioner Richard Ross and NFL Commissioner Roger Goodell. In the September 12 meetings, the players hoped to better understand the complexities of the criminal justice system.