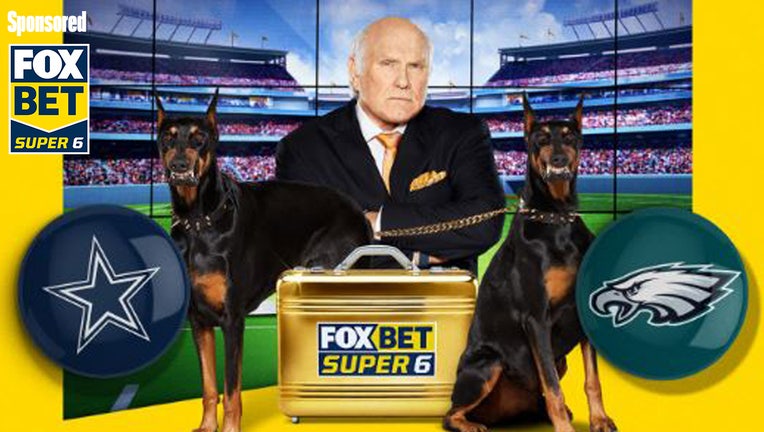 Find out how predicting the outcome of the Cowboys-Eagles game could make you $100,000 richer playing FOX Bet Super 6 NFL Sunday Challenge!

Death, taxes and Cowboys and Eagles fans going off on each other during the week leading up to their game. Don't believe me? Just check Twitter for the trash talk.

But you want to know what's even more epic? The Eagles enter this matchup undefeated, and the Cowboys enter this contest on a four-game winning streak with a backup quarterback under center. Six games into the season, two teams from the NFC Least have two of the best records in the League.

NFL scriptwriters, we see you, and we salute you.

We also salute FOX Bet for allowing us to win some big bucks by picking the correct winner and the margin of victory of this game. But not only for this game — for an entire slate of must-watch NFL games for Week 6.

And when we say big bucks, we're talking $100,000 big. How exactly can the Cowboys and Eagles win you some cash this weekend?

FOX Bet Super 6 NFL Sunday Challenge is a free-to-play contest where you choose the winners and margins of victory for six marquee matchups. Get all six correct — including the Cowboys-Eagles outcome — and you have the chance to claim 100 grand. To get in the game, download the app, make your picks and get your selections in before the games kick off on Sunday for a chance to win Terry's money.

It's that easy, and it's so much fun.

So in addition to the highly-anticipated Cowboys-Eagles battle, we're diving into our predictions for this week's NFL Sunday Challenge games to help you make your picks before Sunday.

Both these squads have 3-2 records. However, the Packers' 3-2 seems a little more underwhelming than the Jets'. And that could be because you expect a team with the back-to-back MVP at quarterback to have a better season.

Having two losses isn't bad, per se, but when two of those wins were by two and three points, it makes you raise an eyebrow.

But even with all that eyebrow raising, we're still going Cheeseheads in this matchup. Aaron Rodgers is 35-7 straight up (SU) as a starter when the Packers are 7- to 10-point favorites. At FOX Bet, Green Bay is favored by 7 against NYJ.

While the Jets are above .500 for the first time since the beginning of 2018, and they've won two road games this season, Green Bay will be the victor come Sunday.

From Matt Ryan to Marcus Mariota, no matter who's under center, it's losing business as usual for 2-3 ATL. This weekend, expect more of the same when the Falcons face the 49ers.

Under coach Kyle Shanahan, San Fran is 5-4 against the spread (ATS) and 5-4 SU when facing NFC South opponents. But when they're a road favorite under Shanahan, the Niners are 12-6.

So far, so good for San Francisco.

Something else that's good for the guys in Red and Gold is that they've had five different players score rushing touchdowns this season. That's the most of any NFL team this year.

Give us the Niners all day.

Like life, football sometimes just isn't fair. And unfair and extremely unfortunate is the situation in Miami with QB1 Tua and backup Teddy Bridgewater being ruled out while they're in concussion protocol. With all the uncertainty at quarterback, FOX Bet still has set the line at Vikings -3.

Well, we're going with Minnesota but by a bigger number.

First, let us quote Allison from California — one of our FOX Bet Super 6 million dollar jackpot winners — and say, "we just think wide receiver Justin Jefferson will do really well."

Jefferson had 12 receptions in Minnesota's Week 5 win, which was a career-high for the wideout. If you can't shut JJ down, you can forget about getting past these 4-1 Vikings.

Another offensive threat that the Dolphins will have to try to stop is running back Dalvin Cook. He scored a season-high two rushing TDs in Week 5. The Dolphins' scoring defense ranks 29th in the league. The unit allows 26.2 points per game. All this points to Minnesota doing what it wants and running through Miami's defense.

To their credit, when you look at the Dolphins' offense, Tyreek Hill's 524 receiving yards ranks third in the NFL. But can you count on him to rack up massive receiving yards in Week 6 when he's catching passes from John Doe?

Prediction:
Vikings by 8 to 10 points

Wow. And that wow is for the Steelers being 1-4 SU this season. But if you look at the trends for this matchup, they point toward Pittsburgh beating Tampa Bay.

It's true. Since 2001, the Buccaneers have gone 1-5 ATS and 1-5 SU against the Steelers. But these aren't your granddaddy's Bucs. This TB team has Tom Brady at quarterback, and over his entire career — including the postseason —Tommy is 12-3 SU when facing Pittsburgh.

And truth be told, the Steelers are on a downward spiral unlike any we've seen under coach Mike Tomlin. They rank 30th in scoring offense, and their 35-point loss in Week 5 to the Bills was the largest loss under Tomlin. They're also on a four-game losing streak.

Could it get any worse? Unfortunately, yes. Look for the going to get even tougher for the Black and Yellow in Week 6.

Prediction:
Buccaneers by 11 to 13 points

Does a 2-3 record count as a Super Bowl hangover? Why, yes, it does, Rams. And that's exactly what Los Angeles has.

But even as poorly as the Rams have played this season, FOX Bet oddsmakers have set this spread at Rams -10.5. And we know why that is: the Rams have been bad, but the 1-4 Panthers have been worse. Carolina has been so bad, in fact, that they fired head coach Matt Rhule five games into the season.

But Los Angeles has been a shell of a championship team. The squad has been held to 10 points or fewer three times this season, and the 21 sacks that the Rams have allowed are tied for an NFL worst. But again, Carolina is also on the struggle bus.

The Panthers rank 32nd in total offense, and they are coachless. Well, they have an interim now that Rhule is out, but you get the drift. And Baker Mayfield is expected to miss more time with his ankle injury. Don't tell anyone we asked, but is that such a bad thing?

At any rate, 10.5 is a big number, considering how lackluster LA has looked, but we're still going with the Rams in this matchup.

How do you say "main event" in football? We'll tell you. Cowboys versus Eagles.

Sunday Night Football will have a bit of everything. An undefeated squad. A backup quarterback. A chance to own the division. It's a made-for-TV movie.

Let's look at the Cowboys first. While there has been a lot of praise for backup QB Cooper Rush being undrafted yet undefeated in his first five career starts, the Dallas defense deserves a lot of credit. The Cowboys rank third in scoring defense, and the nine trips that their opponents have made to the red zone is the lowest in the league. Dallas' 20 sacks and 33 tackles for loss both rank second in the NFL.

On the flip side, the Eagles have their offense to applaud for their perfect 5-0 start. Their 12 rushing TDs are the most of any team this year, while their 419.8 yards per game ranks second in total offense. Not to mention, A.J. Brown's 436 receiving yards rank fifth in the league.

At FOX Bet, the Eagles are favored by 5 points, and we're siding with the oddsmakers in this one. Watching what Dallas has done without Dak has been fascinating, but the fairytale ends in Philly on Sunday night.

Now, it's your turn. After you download the app and submit your selections for the upcoming contest, share your picks with us by tagging @FOXSuper6 and @EricaReneeD and use the #EricaSuper6 across all social media platforms.