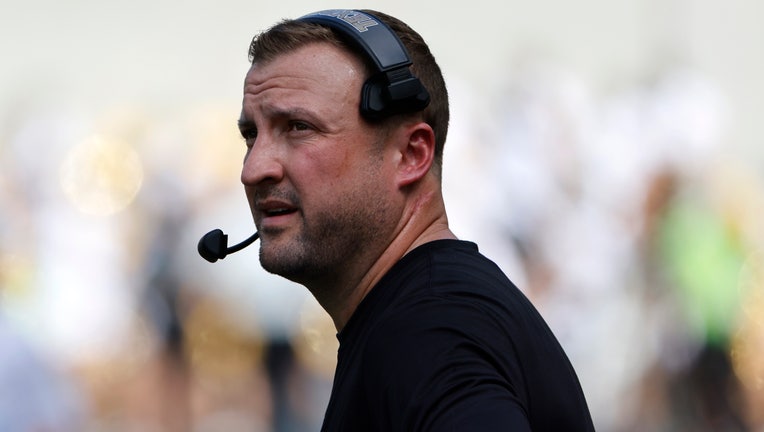 WACO, TX - SEPTEMBER 17: Head coach Jake Spavital of the Texas State Bobcats looks on against the Baylor Bears in the first half at McLane Stadium on September 17, 2022 in Waco, Texas. (Photo by Ron Jenkins/Getty Images)

SAN MARCOS, Texas - Texas State head football coach Jake Spatival is out, only a day after saying he had not heard whether he was returning for a fifth season.

In his four years as head coach, the Bobcats have gone 13-35 and never had a winning record.

The team wrapped their second-straight 4-8 season Saturday with a 41-13 loss at Bobcat Stadium to Louisiana.

The announcement for the change came in the form of a letter from Texas State athletic director Don Coryell Sunday evening.

In the letter, Coryell called Spatival a "tremendous member of our Bobcat community" and thanked him for his service on behalf of Texas State Athletics.

"Ultimately, we simply did not win enough games and make the desired progress for us to believe that the immediate future would be different," Coryell wrote.

In the letter, Coryell stated a search for a new head football coach is underway.

This afternoon, I met with head football coach Jake Spavital to inform him that we are making a change in the leadership of our football program.

Jake has been a tremendous member of our Bobcat community for four years, engaging our fans and donors, recruiting tremendous young men to wear our uniform, and acting as a man of integrity and character. On behalf of Texas State Athletics, I want to thank Jake for his service, and we wish him, Mehgan, and their family all the best moving forward.

I strongly believe that Texas State Football can consistently win at a high level. We have some of college football's most passionate and generous fans and supporters; we have tremendous facilities; we are located in a hotbed of football-driven communities and recruits; we are aligned in our collective vision for Texas State Football; and we are working on providing the necessary resources to enable our student-athletes and coaches to be successful.

Our search for a new head football coach is underway, and we will move with the utmost speed and diligence. We are confident that we will find an excellent leader of men, a man of character, and a tremendous football coach to take us to unprecedented heights. I will refrain from commenting on the search until we are ready to introduce our new coach.

Thank you for all that you do to support Texas State Athletics.