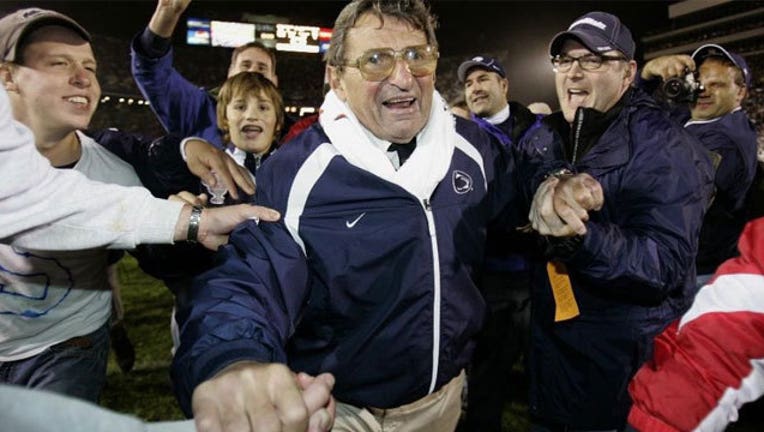 Oct 8, 2005: Penn State head coach Joe Paterno, center, is congratulated by fans as he runs off the field. (Associated Press)

PHILADELPHIA (AP) — A new legal document that claims a boy told Joe Paterno in 1976 that Jerry Sandusky had molested him has dropped like a bombshell and reignited debate about what the Penn State coach knew about his longtime assistant decades before his arrest.

Philadelphia Judge Gary Glazer wrote in an opinion this week that the insurer's evidence includes a claim that one unnamed assistant coach saw "inappropriate contact" between Sandusky and a child at the university in 1987 and a second unnamed assistant coach "reportedly witnessed sexual contact" between Sandusky and a child a year later.

"Also in 1988, a child's report of his molestation by Sandusky was allegedly referred to PSU's athletic director," Glazer wrote, citing events described in a number of the victims' depositions. He said there was "no evidence that reports of these incidents ever went further up the chain of command at PSU."

The judge also found that the liability insurance did not cover a seven-year period ending in 1999 because Penn State's policies at the time did not cover abuse or molestation.

Glazer wrote that when Sandusky abused children at his home or at events held by the children's charity he founded, "he was still a PSU assistant coach and professor, and clothed in the glory associated with those titles, particularly in the eyes of impressionable children. By cloaking him with a title that enabled him to perpetuate his crimes, PSU must assume some responsibility for what he did both on and off campus."

The source of the 1976 allegations was not disclosed in Glazer's ruling. Penn State said in November it had paid 32 Sandusky-related claims amounting to $93 million.

Paterno died in 2012, about two months after Sandusky was first charged with child molestation, along with two high-ranking school administrators accused of a criminal cover-up. But he told a grand jury and reporters that the first time he know of allegations against Sandusky was in 2001, when assistant coach Mike McQueary reported seeing Sandusky attack a child in a team shower.

If confirmed, news that a boy told Paterno in 1976 that Sandusky had molested him would not just contradict Paterno's grand jury testimony, it also would do irreparable damage to his reputation. The school fired Paterno and removed his statue from the front of its football stadium — a decision that still rankles many fans and alumni — but his name adorns a university library, and the NCAA last year restored 111 of his wins that had been vacated right after Sandusky's 2012 conviction.

The coach's son, Scott Paterno, called the new claim "bunk," writing in a tweet on Friday that "it would be great if everyone waited to see the substance of the allegation before they assume it's true. Because it's not."

The family issued a written statement asking for a full public review of the facts and saying that "fighting shadows and rumors on issues that are this significant is a disservice to everyone who cares about the truth. We do not fear the truth, we embrace it. And we will not allow a repeat of what happened before."

Joe Paterno was never charged with any crime, and his family is pursuing a lawsuit against the NCAA for commercial disparagement, arguing the association's since-abolished consent decree with Penn State over the Sandusky scandal damaged their commercial interests and value.

Michael Boni, a lawyer who represented some of the Sandusky claimants, voiced caution about the new Paterno allegations.

"The headlines of these stories is Paterno knew of Sandusky's molestation in the '70s, '76 or '77. I'm unaware of direct, irrefutable evidence that that's the case," Boni said. "Believe me, I'm the last person to defend the guy, but I am the first person to believe in our justice system. And I think you need more than anecdotal evidence or speculative evidence."