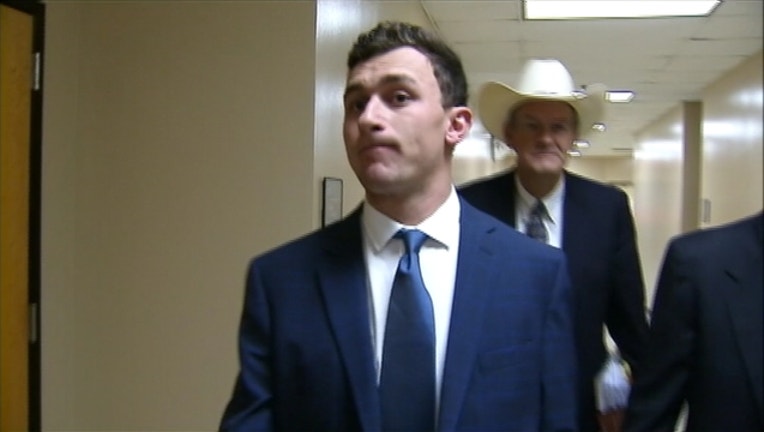 DALLAS (AP) — Johnny Manziel has been suspended for the first four games of next season for violating the NFL's substance-abuse policy, and the free agent quarterback could face further discipline over his domestic violence case if he signs with another team.

The suspension announced Thursday is not related to the league's domestic violence policy, but Manziel would be subject to standards that were toughened two years ago if he signs with another team. The 23-year-old Manziel, released by Cleveland in March, faces a misdemeanor assault charge in Dallas involving former girlfriend Colleen Crowley.

The 2012 Heisman Trophy-winning quarterback from Texas A&M was suspended the same week he posted pictures on Instagram from Cabo San Lucas, Mexico.

The post included a reference to his father, Paul Manziel, who called his son a "druggie" following a report from The Associated Press of one of his attorneys mistakenly sending a text that indicated doubts whether Manziel could stay clean.

A spokeswoman for Manziel declined to comment on the NFL's suspension.

As Manziel's domestic case has played out, he has been photographed partying from Hollywood to Las Vegas to New York in recent months. His own family has expressed concern about his well-being after he was cut by the Browns following two underwhelming seasons.

Manziel spent more than two months in rehab after a difficult first season with the Browns, and the player dubbed "Johnny Football" for his exploits on the field with the Aggies vowed to be more committed to football when he got out.

After showing promise in a couple of starts in his second season, Manziel was demoted to third team after a video surfaced of him partying during the team's bye week. Manziel returned to the starting lineup when Josh McCown broke his collarbone and led the Browns to a win over San Francisco.

Manziel sustained a concussion Dec. 27 at Kansas City and wasn't required to be at Cleveland's finale. But he skipped a required medical checkup and the team wasn't sure of his whereabouts amid reports he was in Las Vegas, hitting the clubs while wearing a disguise.

One of Manziel's defense attorneys, Bob Hinton, inadvertently sent a text to the AP last week indicating Manziel may have spent more than $1,000 at a drug paraphernalia store just 15 hours after he was involved in a hit-and-run crash.

The text made it appear the defense team was seeking a plea deal, and Hinton wrote of concerns over Manziel's ability to adhere to drug-testing conditions. Manziel faces a misdemeanor assault charge that carries a penalty of up to a year in jail and a $4,000 fine.

Hinton resigned from Manziel's case soon after the AP report was published.

The domestic allegations stem from a night out on Jan. 30. Crowley alleged Manziel accosted her at a Dallas hotel, a confrontation that continued downstairs to the valet station. She said he forced her into a car and that a valet disregarded her pleas for help.

The two eventually drove to where her car was parked in front of a Dallas bar, she said in an affidavit. She said Manziel got into the driver's seat and began to drive. Crowley said Manziel stopped when she tried to jump out of the car, but that he then dragged her back inside and hit her.