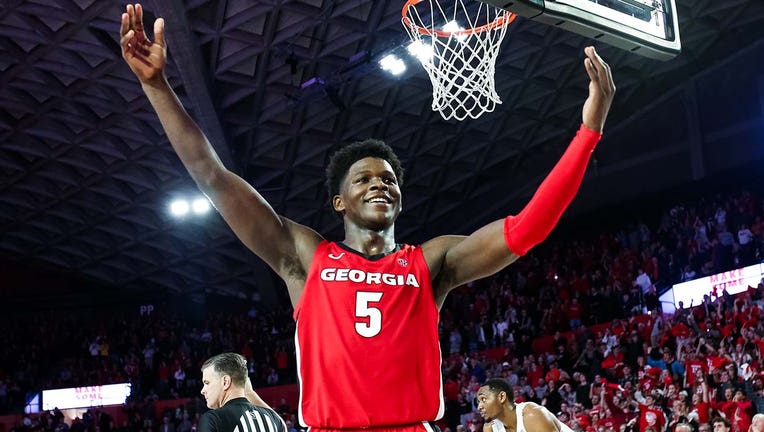 MINNEAPOLIS - With the No. 1 pick in Wednesday night’s NBA Draft, the Minnesota Timberwolves opted to keep the pick and take who they thought was the best player among the prospects.

The Wolves selected Georgia wing/guard Anthony Edwards. A 6-5, 225-pound combo player, Edwards averaged 19.1 points, 5.2 rebounds and 2.8 assists per game while shooting 40.2 percent from the field for the Bulldogs last season. He’s an athletic freak who can serve as the No. 3 player to Karl-Anthony Towns and D’Angelo Russell, and won’t necessarily be asked to be a star from Day 1.

The University of Georgia product comes to Minneapolis to join a roster of young players.

Edwards sat by his mother and grandmother when his NBA dream became a reality.

"I’m feeling very joyful and excited just because of the fact that I had my mother and grandmother next to me. I feel like I’m going to fit perfectly with those guys, because I know Russell likes to play off the ball sometimes, and when he wants to play on the ball, I can play off the ball. KAT is the best three-point shooting big man in the league, so I feel like we can’t go wrong with that," Edwards said.

Wolves front office head Gersson Rosas said Wednesday night taking Edwards wasn't about fit. It came down to a pure talent evaluation, and he was at the top of their board.

"Getting to know Anthony was a special experience. We see a young man who should’ve been a senior in high school this year with incredible potential. We feel like we got something very special here with Anthony Edwards, and the process showed it," Rosas said. "He stood head and shoulders above any player in this draft, and we were excited to be at No. 1 to be able to select him."

The Wolves opted for Edwards over LaMelo Ball, who played professionally last year in Australia, and Memphis center James Wiseman. The three are considered the top prospects in this year's draft.

Rosas got busier on the phones as the NBA Draft got closer. He talked with more than 10 teams about trading the No. 1 pick, but said the value they had for Edwards was better than anything they might get in a trade.

"We just felt for our organization and moving forward the talent was too special, the upside was too special. We’re betting on Anthony, he’s a special kid who’s got a bright future ahead of him," Rosas said.

Rosas said earlier this week the decision they make at No. 1 isn’t for Day 1, it’s for Day 400. Edwards, joining Towns and Russell, can focus on developing on and off the court. He won't be an immediate star, he doensn't have to be and he won't asked to be.

The Wolves finished 19-45 last year, and have made the playoffs once since Kevin Garnett led them to the Western Conference Finals in 2004. A meeting and workout with the Wolves was all it took for Edwards to know he might get taken No. 1.

"I just know they love to compete. The first time they met with me, they had everything mapped out. They had a game plan, they had everything for me," Edwards said. "They love players who are going to come in and compete, they love players who are going to leave it all on the court. They just want you to come in and just be ready. I feel like I’m one of those players and I’m just ready to work."

The Wolves were just getting started after Edwards. They reportledly traded the No. 17 pick in the first round to the Oklahoma City Thunder to bring Ricky Rubio back to Minnesota, and also acquired the No. 25 and No. 28 picks in the process.

The Timberwolves weren't done after drafting Edwards and trading for Rubio. The Wolves acquired Argentinian guard Leandro Bolmaro from the New York Knicks Wednesday night, in exchange for the No. 25 and No. 33 picks. The Wolves then actually picked Minnesota native Daniel Oturu with the No. 33 pick for the Knicks, and he'll reportedly head to the Clippers.

With the No. 28 pick in the first round that was in the deal to get Rubio, the Wolves selected forward Jaden McDaniels out of the University of Washington. McDaniels averaged 13 points, 5.8 rebounds and 2.1 assists while shooting 40.2 percent from the field.