NORMAN, Okla. (AP) - The University of Oklahoma's Sooner Schooner took a spill on the field during one of its touchdown runs in the 2nd quarter against West Virginia on Saturday.

After Oklahoma's fourth touchdown, the horse-drawn Sooner Schooner came onto Owen Field to celebrate, but it fell over while making a turn, spilling people and debris onto the field.

The horses kept running but quickly were corralled and there were no major injuries to human or horse, even though both riders were thrown from the Schooner. Security officials quickly cleared the debris and play resumed without delay. After Oklahoma's fifth touchdown, a cheerleader ran onto the field waving a giant "OU" flag in lieu of the Schooner.

A statement from Oklahoma's athletic department said officials think the mishap "was the result of weight distribution among riders in the rear of the wagon. Three individuals were evaluated at the stadium and released. All others reported that they were uninjured." 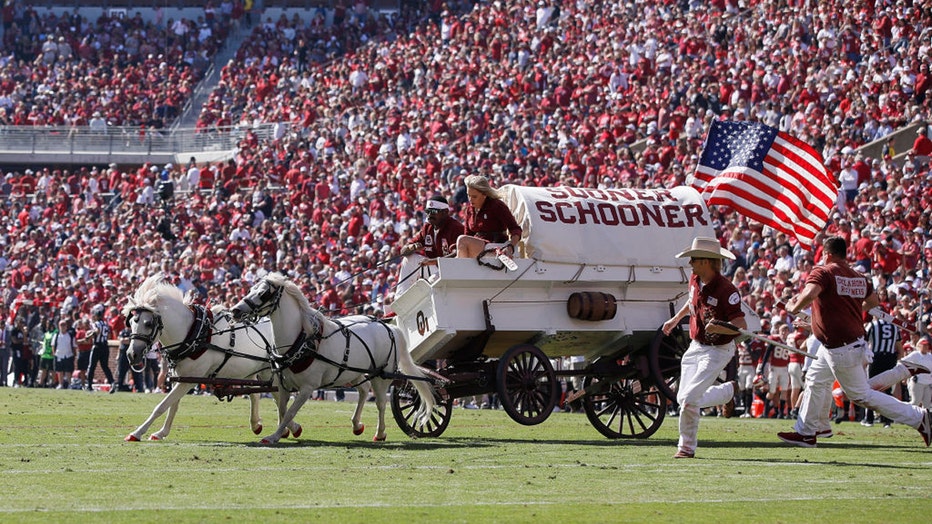 NORMAN, OK - OCTOBER 19: Oklahoma Ruf Nek's Sooner Schooner over turns after a touchdown celebration during a college football game between the Oklahoma Sooners and the West Virginia Mountaineers on October 19, 2019, at Memorial Stadium in Norman, OK

"Upon initial evaluation, it also appears the ponies are uninjured. Medical staff responded immediately as did the expert horse handlers and veterinarian who staff all games. We are grateful that the injuries were not serious and for the staff members who responded so well."