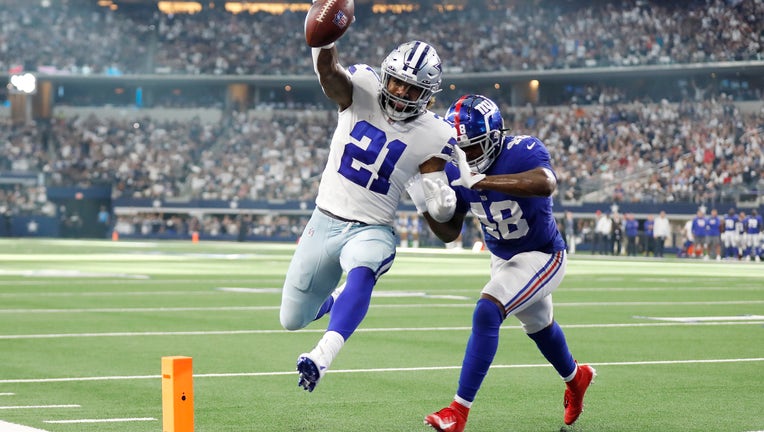 ARLINGTON, TEXAS - OCTOBER 10: Ezekiel Elliott #21 of the Dallas Cowboys runs the ball for a touchdown during the third quarter against the New York Giants at AT&T Stadium on October 10, 2021 in Arlington, Texas. (Photo by Wesley Hitt/Getty Image

ARLINGTON, Texas (AP) - Dak Prescott threw for three touchdowns the day before the one-year anniversary of his severe ankle injury in the same stadium against the same opponent, and the Dallas Cowboys beat the New York Giants 44-20 on Sunday.

The already injury-plagued Giants lost running back Saquon Barkley to an apparent ankle sprain in the first quarter and quarterback Daniel Jones to a concussion in the second quarter.

After a woozy Jones was taken off on a cart, New York (1-4) pulled even at 10-all on backup QB Mike Glennon's first snap of the season, a fourth-down handoff to Barkley's replacement Devontae Booker from the 1.

Glennon and the Giants couldn't keep it up 364 days after then-Dallas backup Andy Dalton led a comeback to a 37-34 victory following the season-ending compound fracture and dislocation of Prescott's right ankle at the home of the Cowboys.

Dallas (4-1) has won four games in a row since a loss to Super Bowl champion Tampa Bay in the opener.

Prescott had scoring tosses of 49 yards to CeeDee Lamb and 24 yards to Amari Cooper before star running back Ezekiel Elliott caught a pass in the flat and high-stepped into the end zone for a 4-yard score shortly after missing two plays to get his back checked.

Jones was injured when he was tackled just shy of the goal line by rookie Cowboys linebacker Jabril Cox on a bootleg from the 1. Jones struggled to stay upright, twice putting his hands on his knees before stumbling badly as Dallas' Jayron Kearse and others rushed to help.

The cart came out for Jones a short time later, just as it did a year earlier when an emotional Prescott was driven off with the pandemic-limited crowd knowing his season was over because of the gruesome scene on the field.

Prescott celebrated to the end this time with more than 90,000 at AT&T Stadium for the third consecutive week. He was 22 of 32 for 302 yards, bouncing back from an interception and botched snap for a lost fumble in the first half.

Barkley had two carries for 9 yards when he stepped on Dallas cornerback Jourdan Lewis' foot on a play away from the ball. TV footage showed significant swelling on the outside of his left ankle.

Elliott finished with more than 100 yards in consecutive games for the first time since three straight in 2019, finishing with 110 yards and a punctuating 13-yard scoring run in the fourth quarter. The Cowboys had 515 yards total offense.

Glennon was 16 of 25 for 196 yards with a late 3-yard touchdown to Booker and two interceptions. The first was Trevon Diggs' NFL-leading sixth, and the second was returned 45 yards for a score by Anthony Brown in the final two minutes.

Diggs has at least one interception in all five games. The only other Dallas player to do that was Don Bishop in 1961. 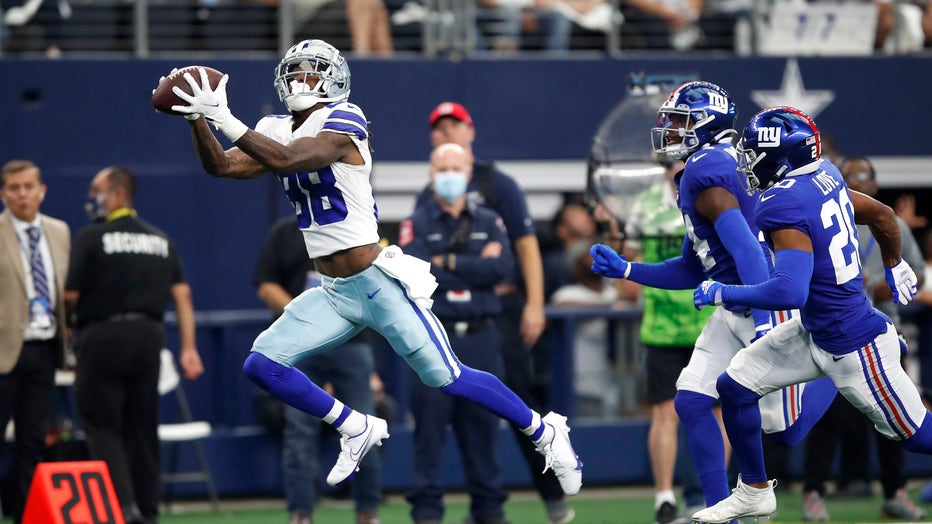 ARLINGTON, TEXAS - OCTOBER 10: CeeDee Lamb #88 of the Dallas Cowboys catches the ball for a touchdown during the second quarter against the New York Giants at AT&amp;T Stadium on October 10, 2021 in Arlington, Texas. (Photo by Wesley Hitt/Getty I

Giants rookie receiver Kadarius Toney, who had season highs of 10 catches for 189 yards, was ejected for throwing a punch at Dallas safety Damontae Kazee after his last reception. Toney threw the punch after Kazee slung him to the ground at the end of a 13-yard play. Toney and Kazee were given offsetting unsportsmanlike conduct penalties.

Giants LT Andrew Thomas was active but didn't start because of a foot injury. Nate Solder moved from RT to LT, and Matt Peart took Solder's spot. Solder was the starting LT before he opted out of the pandemic-altered 2020 season. ... Already without WRs Sterling Shepard and Darius Slayton because of hamstring injuries, New York lost WR Kenny Golladay to a knee injury. CB Rodarius Williams also didn't return because of a knee injury.

Cowboys: The added game in the first 17-game season is next Sunday at New England.