AUSTIN, Texas - Texas had pressured Creighton’s shooters into a miserable night, only to watch a late flurry of 3-pointers start swishing.

An 11-point Longhorns lead was down to three.

That hardly rattled Marcus Carr and the second-ranked Longhorns, who stepped up with big late shots of their own and steady free-throw shooting to secure another impressive early-season victory, 72-67 over the seventh-ranked Bluejays on Thursday night.

Creighton struggled through a wretched 3-point shooting night, but pulled within 62-59 thanks in part to five points in a row by Baylor Scheierman. Carr’s baseline jumper and an easy layup by Tyrese Hunter when Creighton lost him on an inbound pass with 46 seconds left stretched the Longhorns’ lead again.

That didn’t quite close the door on Creighton, which got two more 3-pointers from Scheierman, who had missed his first nine attempts. That forced Texas to finish it from the free-throw line behind Carr and Brock Cunningham. Cunningham’s two free throws with 4 seconds left were his only points of the game.

"There’s going to be a bunch of times one of us has to go down there and knock down a bunch of free throws," Carr said. "We talk about it all the time." 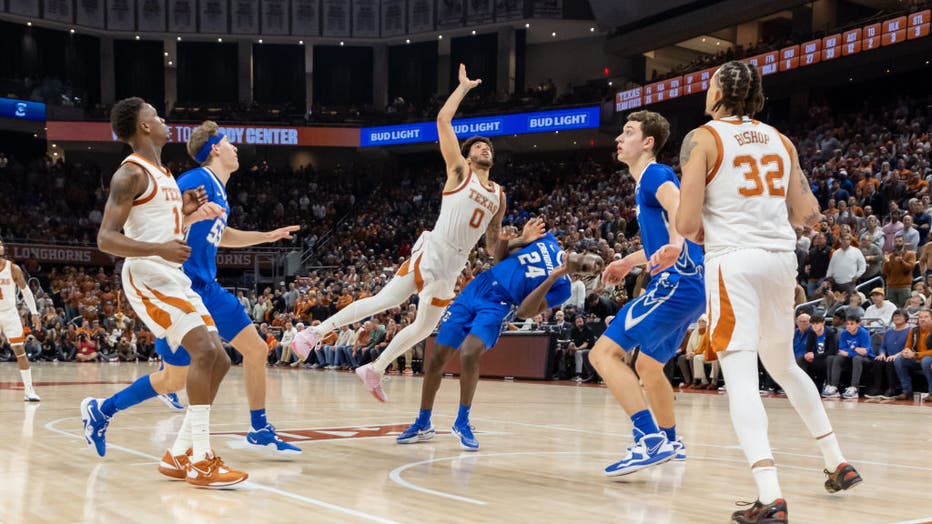 The matchup was part of the Big 12-Big East Battle and Texas earned its second win over a top-10 opponent in its new arena. The Longhorns (6-0) beat then-No. 2 Gonzaga on Nov. 16 and have their highest ranking since they were No. 1 during the 2009-2010 season.

Ryan Kalkbrenner had 20 points and 13 rebounds for Creighton (6-2), and Ryan Nembhard scored 17 points. The Bluejays were 4 of 27 on 3-pointers.

Scheierman, a 44% shooter from beyond the arc this season, made three 3s in a row late. His off-balance shot from the right corner over a defender pulled the Bluejays within 68-65 with 11.4 seconds left.

Scheierman finished with 13 points and 11 rebounds.

"The reality is you are gonna have nights," Creighton coach Greg McDermott said. "It just happens. We don’t ever want him to stop shooting."

Creighton: Kalkbrenner was all but unstoppable on a 9-of-10 shooting night for the Bluejays, who kept launching from long range instead of looking for their 7-foot-1 center.

Texas: The Longhorns couldn’t force their usual numbers of turnovers and fast-break points, but were exceptionally clean with the ball on offense. Texas had just three turnovers that Creighton turned into three points.

Texas senior forward Christian Bishop played three seasons at Creighton before transferring prior to last season. He finished with six points and four rebounds in 16 minutes.

"We understood what this game was, not just for our team but for Christian," Carr said.

McDermott suggested his team maybe just wore out. The Bluejays went 2-1 in the Maui Invitational last week and then played their first game of the season on an opponent’s home court.

"Three games in three days against ranked teams (in Hawaii) and then to come in here," McDermott said. "That’s a lot to ask of my team."

Texas plays No. 16 Illinois in New York City on Dec. 6 in the Jimmy V Classic.