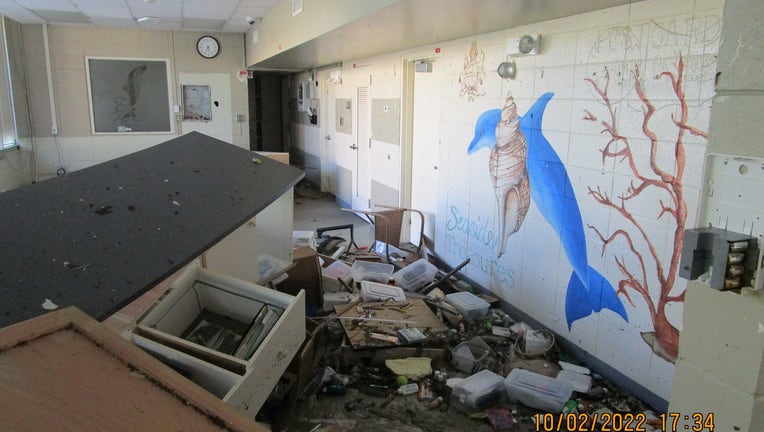 LEE COUNTY, Fla. - School campuses in Lee County, Florida, where Hurricane Ian made landfall, remain closed nearly a week after the storm that left some students and staff with only the clothing on their backs.

The school district in Southwest Florida educates more than 90,000 students from Kindergarten through 12th grade. It's also the Southwest Florida county where Hurricane Ian made landfall as a Category 4 storm with 150 mph winds and deadly storm surge.

Lee County Schools Superintendent Christopher Bernier told FOX Weather on Tuesday that the school district and emergency managers will gather next week and provide a recommendation of when schools should reopen.

WHEN WILL POWER BE TURNED BACK ON? FULL RESTORATION FROM HURRICANE IAN COULD TAKE MONTHS

"This is an area that took a great impact from Ian," Bernier said. "I would say all of our buildings were impacted at some level, some more significantly than others."

Bernier said the building inspector had been hard at work since Monday. The district has established three categories of impact: low, medium and high.

Low meaning that to reopen, the building needs power, water and minimal repairs. More than half of the 119 schools in Lee County suffered minor damages. However, 14 school buildings are in high-impact areas where significant work is needed before they can reopen.

A few may be beyond repair, according to the district.

Since Ian, school district leaders have been checking in with students and school staff, some of whom lost everything in the storm. Bernier said he recently spoke to some students living in shelters after Hurricane Ian.

"We’re working to find opportunities and places for those young people to stay together as a learning community and begin the process of their education, but those plans are still underway," Bernier said.

According to Bernier, students are being contacted by their school principals, who are working down class lists.

Soon the district plans to send out a survey to help better understand their student’s needs after the storm.

Because internet and cellphone service outages are still an issue throughout Lee County, the school district will partner with the 2-1-1 United Way hotline to ensure all student families can complete the survey.

The Lee County School District is also working to ensure their students have food, working with community food distribution sites and hosting food pick-up at the district's central office. More of those events will be announced soon, Bernier said.