Dolly Parton was with a heavy heart on Monday while co-hosting the 57th Academy of Country Music Awards (ACMs).

The "Heartstrings" star, 76, delivered an opening monologue in which she dedicated the "entire show" to Ukraine, asking everyone to send their prayers to the people of Ukraine in the midst of Russia's invasion.

"I love to laugh, I love to joke, and we're going to have a good time tonight, but I do want us before we get started with all our fun to take a serious moment," Parton said while speaking to a packed Allegiant Stadium in Las Vegas, Nevada. "Now I don't want to be political and this is not. I'd rather pass a kidney stone than do that, but I want us to send our love and hope to our brothers and sisters in Ukraine."

"So why don't we just dedicate this entire show to them and pray for peace around this crazy old world?" she added before introducing a collaborative performance featuring Jimmie Allen and Gabby Barrett.

The Office of the United Nations High Commissioner for Human Rights has confirmed 406 civilians killed in Ukraine since Russian President Vladimir Putin's invasion began on Feb. 24. And 801 more civilians were injured as of midnight Sunday, the office said, noting that fighting has stymied accurate reporting, and the numbers are actually higher.

The attack has prompted 1.7 million Ukrainians to flee the country.

In addition to Parton, Matthew Ramsey from Old Dominion also sent his thoughts to Ukraine during their acceptance speech for group of the year.

"I'm so thankful that Dolly said what she said at the beginning because I was feeling a little bit strange because we're in this beautiful bubble here where every person whose name is mentioned tonight has fought for their dreams. But there are people fighting for their lives right now, and it felt a little weird. So I'm so thankful she said that. So thank you. We're so grateful for this award. Couldn't be more thankful."

Viewers took to Twitter as well to commend Parton for dedicating the show to Ukraine.

"Such a class act asking to support Ukraine," one person wrote in part. Another individual said "thank you" to Parton. 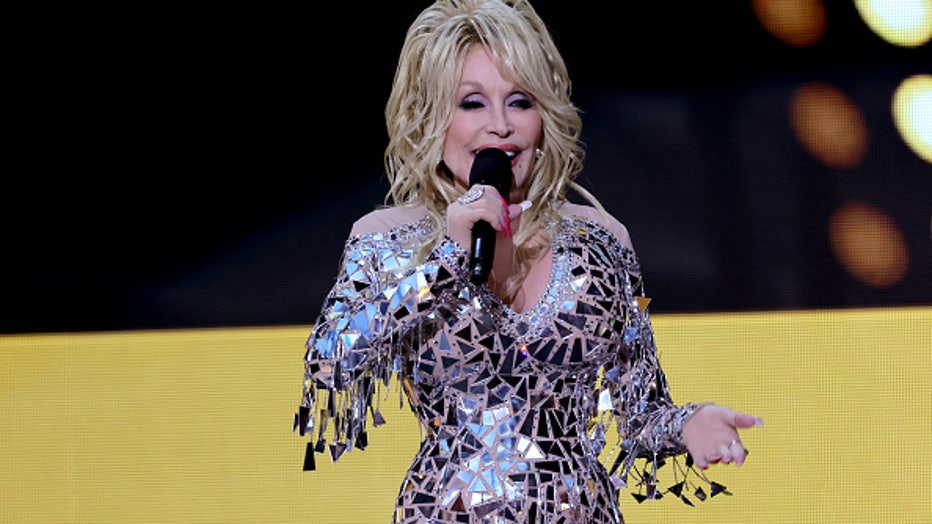 Standing in a shimmering mosaic bodysuit, Parton opened the 2022 ACMs in opulent style. Certainly, fit for the glitz and glamour of the Vegas night, Parton was equal parts self-deprecating and wrought with humor, taking several digs at herself while loosening the crowd for a jam-packed night of performances by country music’s best names.

"I wanted to shine tonight, did I make it?!" she said during her monologue. "I was walking through the hall back here coming on stage, and a disco ball just fell right on me. Got shards of glass all over me."

"I'm just hoping that nothing punctures me or I'm going to be sailing around this room like an inflatable doll," she quipped. "So catch me if you can!"

"What happens in Vegas does not stay in Vegas, and I am so excited to be here in Las Vegas when our two great co-hosts Jimmie Allen and Gabby Barrett," she added of the two young country standouts. "Yes, now they are the real deal, the real deal. And you know how I hate anything fake."

During the bevy of show-stopping performances, Chris Stapleton paid tribute to the victims of the 2017 Las Vegas massacre at the Route 91 Harvest Music Festival with a rendition of his hit, "Watch You Burn." You’re gonna get your turn. The devil’s gonna watch you burn," he belted in a raspy baritone.

Morgan Wallen appeared to move on from his public scandal as he took home an award for album of the year with "Dangerous: The Double Album."

Following a leaked video showing him using a racial slur, the ACMs announced that they had barred "Wallen's potential involvement and eligibility" from last year's award show.  At the time, the 28-year-old was subsequently suspended by his record label, Big Loud Records, and conglomerates like iHeartRadio, which pulled his music from its stations.

Wallen waited months before publicly breaking his silence on the incident, sharing a handwritten letter to fans on social media in April.

In November, Wallen announced "The Dangerous Tour" for 2022.

In his ACMs speech on Monday, Wallen made no direct reference to the issue and his absence from recent awards shows, but may have hinted at it as he said that taking home the honor would "signify" to his one-year-old son Indigo Wilder "that his daddy was a fighter and that he chased his dreams and worked hard to make them a reality."

"When I started this album, I was a kid. By the time I put it out, I was a father," he said in part.

Jason Aldean and Carrie Underwood won single of the year for their duet "If I Didn't Love You," while Lainey Wilson won song of the year for "Things a Man Oughta Know." The artists later performed the songs live in a show that was heavy on performances.

Another show-stopping performance was Kelly Clarkson who performed a rendition of the late Whitney Houston's "I Will Always Love You."

Miranda Lambert, 38, also took home her first-ever win for entertainer of the year and many fans took to social media to praise the country star.

"Oh my gosh, I cannot believe I'm not there to celebrate," Lambert said during a video acceptance speech from London where she is set to headline Country 2 Country on Friday.

"This is my first time missing the ACMs in 17 years," she said. "My heart is a little broken, but I'm happy to be where I am. I've been waiting for this for a really, really long time. I actually never thought it would happen. But thank you so much to the country music family for embracing me all these years and continuing to support me."

"You can say whatever the hell you want. But NO ONE, NO ONE deserves this award more than Miranda Lambert. 22 years later," wrote one Twitter user, while another echoed the sentiment, adding, "It’s about d--n time!"

The show streamed live on Amazon Prime Video, tried to evoke a party atmosphere while paying tribute to tragedies both global and local.

FOX News Digital's Stephanie Pagones and The Associated Press contributed to this report.