AUSTIN, Texas - Plumes of smoke could be seen from the 183 frontage road, as firefighters worked to put out a blaze, located inside a homeless camp in Northeast Austin.

“Upon arrival there were no residents of the camp we had to deal with and rescue,” said Matthew Cox, battalion chief at the Austin Fire Department.

The department said the encampment under the bridge, is about the size of three football fields. Firefighters have been called out here several times in the past for medical reasons. After they put out Monday's fire, they had to dig in the charred remains of belongings to make sure nobody was injured. What they found were sophisticated living quarters inside the city tunnel.

“Couches, TV’s, propane tanks, padlocked areas, mattresses, trash and literally hundreds of needles. They've become very resourceful in dealing with lack of no power so there's a generator, that we have to account for....that leaking into the watershed,” said Cox. 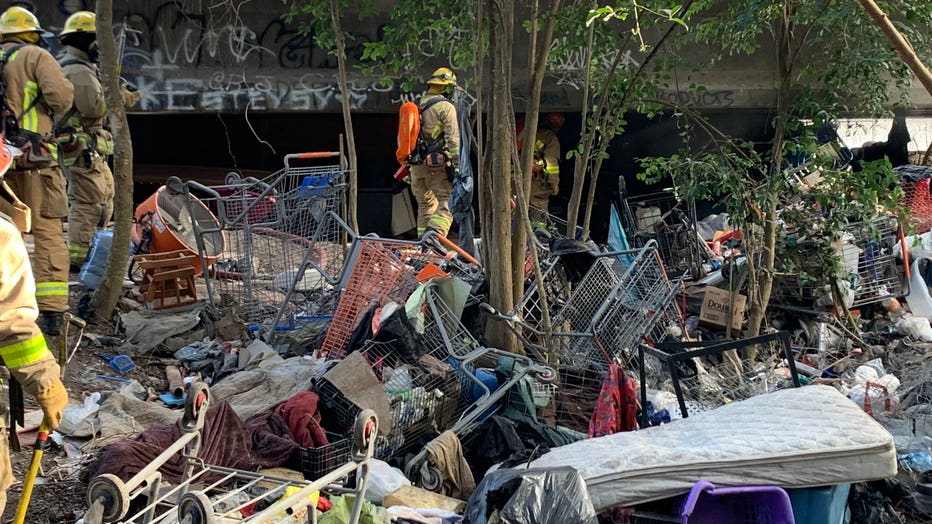 After their investigation, they handed things over to TXDOT to inspect the bridge that was damaged from the fire.

“We have not had a lot of these types of fires but this is a very good reminder as to why bridges are not a safe place for people to live,” said Diann Hodges, spokesperson for TXDOT.

Ridge Johnson said he was underneath the bridge when the fire broke out.

“It freaked my girlfriend out. She's like schizophrenic, so I had to take care of her for the last few hours,” he said.

Johnson said the fire didn't touch them, because of where they were located

“I have a cave, it's pretty much impenetrable, you don't really mess with anybody in a cave. Fire doesn't do anything. I put a blanket over the entrance, no smoke came in, I have a chimney and furnace inside, smoke goes out,” said Johnson.

He plans to return to the camp as soon as possible. The cause of the fire is undetermined.

“How it started, who knows? It's going to be practically impossible to determine because there is just so much stuff here,” said Cox. The city Watershed Protection Department is considering adding the site to their cleanup list.