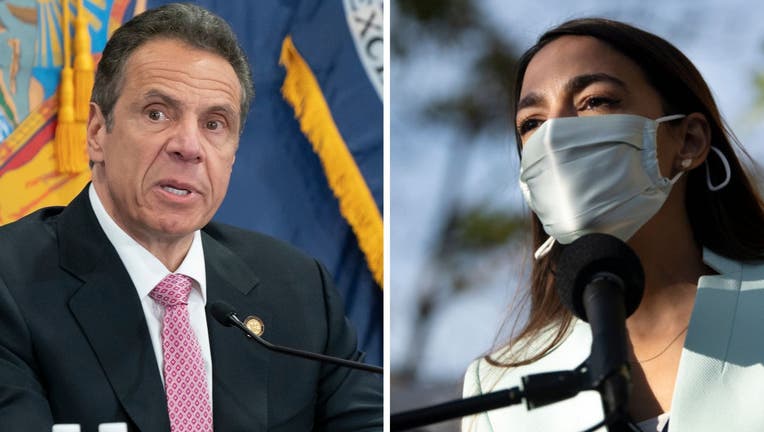 The New York Democrat said in a statement: "I support our state’s return to co-equal governance and stand with our local officials calling for a full investigation of the Cuomo administration’s handling of nursing homes during COVID-19. Thousands of vulnerable New Yorkers lost their lives in nursing homes throughout the pandemic. Their loved ones and the public deserve answers and transparency from their elected leadership, and the Secretary to the Governor’s remarks warrant a full investigation."

Meanwhile, Democratic state senators are moving to strip the governor of his unilateral emergency powers during the pandemic, a remarkable intraparty rebuke. The measure could be voted on next week.

The FBI and the U.S. attorney for the Eastern District of New York  reportedly both have opened an investigation into the Cuomo administration’s handling of nursing homes during the pandemic.

Democratic New York State Assemblyman Ron Kim sounded the alarm this week on Cuomo's behavior, alleging that the governor threatened to "destroy" him in a spat over the state’s nursing home crisis.

Kim said Cuomo made the threat hours after the New York Post reported one of the governor’s top aides admitted during a private call that his administration withheld data because they worried it could be "used against us" in a federal probe. In response to the report last Thursday, Kim said the aide’s remarks sounded "like they admitted that they were trying to dodge having any incriminating evidence."

Cuomo reportedly asked Kim if he was "an honorable man," and threatened that Kim "will be finished" and "destroyed."

New York Mayor Bill de Blasio said the intimidation "sounds like classic Andrew Cuomo." "A lot of people in New York State have received those phone calls," he added. "You know, the bullying is nothing new. I believe Ron Kim, and it's very, very sad," de Blasio said.

"What gets lost about 3/25/20 Executive Order to send 9,000 COVID patients to nursing homes is that (according to the AG's report) NHs cried to the governor that half of their staff were sick/home of COVID!" Kim later tweeted. "And that’s when Gov Cuomo handed out his blanket legal immunity to them."

Cuomo spokesman Richard Azzopardi denied the governor threatened Kim on the call but did say Kim and Cuomo had had a  "long and hostile relationship."

A number of others with connections to the governor have posted accusations of bullying against Cuomo on social media after Kim spoke out about his conversation with him.

The revelations come after the New York attorney general Letitia James released a report that revealed how the Cuomo administration had underreported coronavirus deaths at nursing homes. New York had not been counting those who contracted Covid-19 in a nursing home but later died in a hospital as nursing home deaths.

New York State Democratic Assemblywoman Yuh-Line Niou said Friday her inbox had been "flooded" with allegations of mistreatment from the governor.

"I kid you not....my text messages, my DMs, and my inbox are flooded with [C]uomo stories. So many people have been bullied, mistreated, or intimidated by him," she wrote in a tweet.