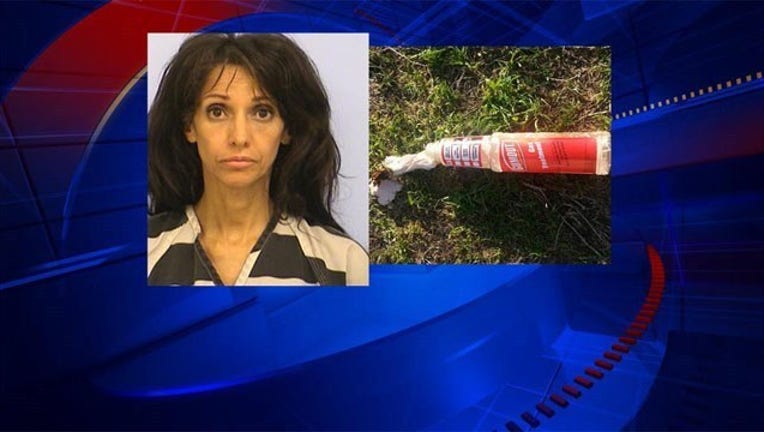 According to police documents, it's confirmed to be an incendiary Molotov cocktail -- a bottle of "gum out fuel additive" with a burned piece of paper towel rolled into a wick that could have exploded.

Prayer volunteer Ruth Allwein says it was thrown in her general direction Monday night while praying in front of the Planned Parenthood on Ben White Blvd.

Allwein says Monday night a woman in a car slowed down next to them. She thought she wanted one of their pamphlets.

But instead she threw the burning bottle.

"I was kind of trying to figure out what to do. 'Was I just going to stand here until it blows up or something?' So I ended up running over and stamping it out," she said.

Allwein says another volunteer followed the woman and was able to give police a partial description of the vehicle.

Austin Police confirm they tracked the white BMW SUV down on I-35 and arrested 52-year-old Melanie Toney.

Ken Lambrecht is the President and CEO of Planned Parenthood of Greater Texas. He says he's sad something like this happened and he's glad everyone is okay.

"Planned Parenthood does not believe violence gets us anywhere. We believe that there needs to be a respectful dialogue among individuals with differing opinions and we should always work together as best we can to further access to healthcare. Our community needs more access to care not less," Lambrecht said.

Allwein says her usual prayer shift is Monday nights but after what happened, she needed to come back.

"I needed to get back up on the horse and not be scared to come back after a really nerve-wracking event," she said.

Heather Gardner is with the Central Texas Coalition for Life. Both she and Allwein say they forgive the woman who threw the bottle...and they're praying for her.

"We forgive her. It's understandable that she's angry. I certainly hope that she doesn't resort to violent actions like that again because it's not helpful for anything including herself. But we're here for her and we want her to know that," Gardner said.

"I do. And I have been praying for her. I'd like to give her a hug," Allwein said.

According to APD paperwork, Toney initially denied everything but later admitted she had thrown the bottle out and that it "might" have been smoldering when she threw it out.

Toney is charged with Aggravated Assault -- a 2nd degree felony.