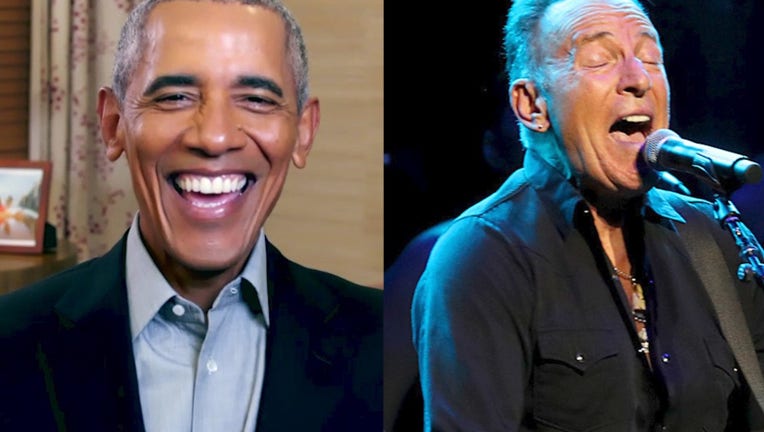 "Though the two have very different backgrounds and careers, they formed a deep friendship," the streaming service announced in a news release Monday. "The longtime friends discuss their hometowns and role models, explore modern manhood, and confront the painfully divided state of the country today—and offer a vision of how we can all move forward together. "

Spotify has already released two of the eight episodes.

"How did we get here? How could we find our way back to a more unifying American story?" Obama asked in the first episode. "On the surface, Bruce and I don’t have a lot in common. But over the years, what we’ve found is that we’ve got a shared sensibility. About work, about family and about America."

Obama tweeted that he and Springsteen taped the conversations in 2020.

"Last year, I sat down with my good friend Bruce @Springsteen for a long and meaningful conversation that touched on so much of what we’re all dealing with these days," he posted.

The seemingly offbeat relationship between the former president and rock star began when Springsteen performed at benefits for Obama during his presidential campaigns. But it has blossomed into deeper conversations since he left office, Obama said in the first episode.

"I have no recall," Springsteen said in the podcast’s preview before the two men broke out in laughter.

Springsteen used a few guitars during the course of the podcast. In the first episode, both men recalled feeling like outsiders growing up and turning to their fields of work as a way of finding their voices, with a little "megalomania" involved.

In later episodes, they talk about racism, fatherhood and marriage.

The "Renegades: Born in the USA" series title references one of Springsteen's biggest hits.