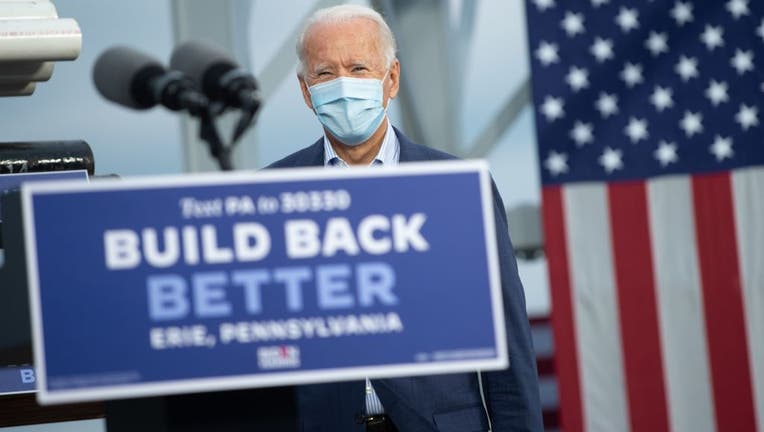 With the backdrop of a union facility in a key battleground county of Pennsylvania, Joe Biden on Saturday blistered President Donald Trump as only pretending to care about the working-class voters who helped flip the Rust Belt to the Republican column four years ago.

“Anyone who actually does an honest day’s work sees him and his promises for what they are,” Biden told a masked, socially distanced crowd at a training facility for plumbers and other tradespeople.

The Democratic challenger has hammered Trump on the economy in recent weeks, from sweeping indictments of how the president has downplayed the novel coronavirus and its economic fallout to a withering personal contrast between Biden’s middle-class upbringing with that of the multimillionaire's son and self-proclaimed billionaire.

Nowhere could Biden’s arguments prove more decisive than in Erie County. Long a Democratic bastion, it was among the most populous counties in the nation to flip from the Democratic column to Republicans in 2016.

Trump and Biden speak on the state of the U.S. economy.

Trump outpaced Democrat Hillary Clinton by almost 12,000 votes, four years after President Barack Obama led Republican Mitt Romney by 19,000 votes. That accounted for a net 31,000-vote swing in a state that Trump won by about 44,000 votes. Trump was the first Republican presidential nominee to carry Erie since President Ronald Reagan's landslide reelection in 1984 and the first GOP standard-bearer to win Pennsylvania since George Bush's election in 1998.

Erie County rebounded strongly to Democrats in the 2018 midterms.

“The president can only see the world from Park Avenue. I see it from Scranton and Claymont. Y’all see it from Erie,” Biden told union officers and members, referring to his childhood hometowns in Pennsylvania and Delaware.

He lamented “the most unequal recovery in American history” since COVID-19 ground the economy to a halt in the spring. The investor class and top wage earners are fine, Biden said, “but what did the bottom half get?”

The former vice president and his aides believe it’s critical for voters to connect the pandemic to the economy. A Pew Research poll conducted from Sept. 30 through Oct. 5 found Biden with a wide advantage when voters were asked who they trusted to handle coronavirus. Biden topped Trump on the question 57% to 40%. Yet Trump held a 52% to 51% edge as voters’ choice to “make good decisions about economic policy.”

Biden used the stop at the training facility to show off his knowledge of apprentice programs and underscored the role that tradespeople play in the larger economy.

“If every investment banker in New York went on strike, nothing would much change in America,” Biden said, “but if every plumber decided to stop working, every electrician, the country would come to a halt.”

Biden delivered the first speech of his campaign at a Pittsburgh union hall in April 2019, and he’s since piled up a long list of union endorsements. The president’s reelection campaign is looking for a repeat of 2016, when Clinton won many of the same union endorsements but large swaths of rank-and-file members split from their leadership to back Trump.

The president and his GOP allies have pushed paid media and social media messaging arguing that Biden’s tax and energy policies would cripple industrial state economies, especially energy-producing states like Pennsylvania. Trump has repeatedly stated, falsely, that Biden will outlaw fracking as a means to extract natural gas. Biden has proposed only barring new leases on federal land, a fraction of U.S. fracking operations.

“No matter how many lies he tells, I am not, not, not banning fracking,” Biden said. “Period.”