Biden called on U.S. employers to help more employees get vaccinated, saying it will help provide a boost in the country’s economic recovery. Biden also noted the new guidance issued by the Treasury Department earlier Monday that will help distribute $350 billion in aid to state and local governments. The aid is part of Biden's larger $1.9 trillion coronavirus relief package, called the American Rescue Plan, that became law in March.

Administration officials said payments could begin to go out in the coming days to eligible governments, allowing state, local, territorial and tribal officials to offset the economic damage from the coronavirus pandemic. The announcement came after the government reported Friday that just 266,000 jobs were added in April — a miss that the president felt obligated to address from the White House on Monday.

"We’re moving in the right direction," Biden said. "Our economic plan is working. I never said — and no serious analyst ever suggested — that climbing out of the deep, deep hole our economy was in would be simple, easy, immediate or perfectly steady." 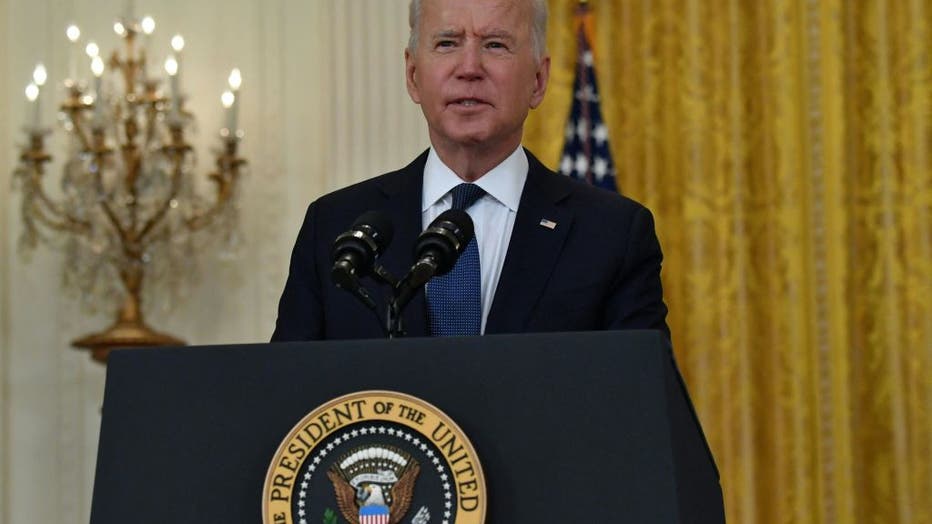 President Joe Biden speaks about the economy, in the East Room of the White House on May 10, 2021 in Washington, D.C. (Photo by NICHOLAS KAMM/AFP via Getty Images)

The April jobs report was sharply lower than in March and far fewer than economists had expected. The slowdown was attributed to a multitude of factors, including nearly 3 million people reluctant to look for work because they fear catching the virus. Some businesses — and Republican lawmakers — also argue that a $300-a-week jobless benefit, paid for by the federal government, is discouraging some of the unemployed from taking new jobs.

"It is a terrible jobs report, not what we were expecting at all," Republican Utah Gov. Spencer Cox said on CNN’s "State of the Union" on Sunday. "But that’s what happens when we pay people not to work."

But Biden said the administration has not seen "much evidence" of unemployment benefits keeping people at home. He added that "nobody should game the system," and anyone collecting jobless benefits who is offered a suitable job must take the role or lose their benefits.

The president has argued that the April jobs report is an indication that more federal spending is needed to help bolster the economy. Biden has pitched to Congress a $4 trillion package for spending on infrastructure, education and children — a measure many liberal Democrats say should be bigger and most Republicans argue is far too large.

"The American Rescue Plan is just that — a rescue plan. It is to get us out of the crisis and back on track, but it is not nearly enough. That’s why we need the American Jobs Plan," Biden continued.

The president has been pushing even more ambitious government spending, proposing a combined $4 trillion of investments in infrastructure, families and education to be funded by higher taxes on corporations and the wealthy. Some of that funding would build on the child tax credits and state and local government money that was part of the relief package.

The economic rebound from the pandemic recession has been so fast that many businesses, particularly in the hard-hit hospitality sector — which includes restaurants, bars and hotels — have been unable to fill all their job openings. The Biden administration said Monday it would begin sending the first grants under the recently launched Restaurant Revitalization Fund to 16,000 "hard-hit restaurants."

"These grants will give restaurants and bars the flexibility to hire back workers at good wages," a White House fact sheet states.

Other Americans have entered new occupations during the pandemic rather than return to their old jobs. Many women, especially working mothers, have had to leave the workforce to care for children.

The Department of Health and Human Services also on Monday released guidance to states, tribes, and territories so states "can start getting the child care stabilization funding to providers immediately," according to the White House statement.