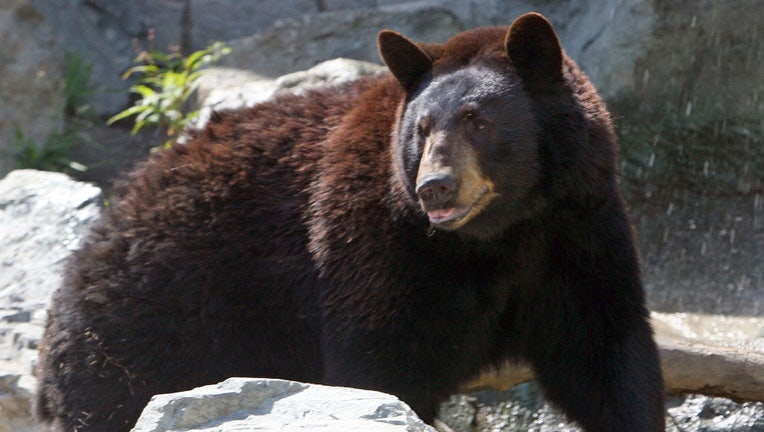 FILE-An image of a black bear in a zoo in 2009. (Angela Rowlings/MediaNews Group/Boston Herald via Getty Images)

MORRIS, Conn. - A 250-pound (113-kilogram) black bear mauled a 10-year-old boy playing in his grandparents’ backyard in Connecticut and tried to drag him away before the animal was fatally shot by police, authorities said.

The child was attacked about 11 a.m. Sunday in the town of Morris, the state Department of Energy and Environmental Protection said. He was taken to a hospital for treatment of injuries that were not life-threatening.

The boy's grandfather described the harrowing attack to the Republican-American of Waterbury. James Butler said his grandson was playing near a trampoline when the bear emerged from thick woods behind the house.

"I heard him yell ‘bear’ and when I looked up, I saw his leg in the bear’s mouth and the bear trying to drag him across the lawn," Butler said.

Butler, who uses a wheelchair, wheeled his chair toward the bear and threw a metal bar at its head, he told the newspaper.
The bear released the boy but then grabbed the child a second time and used its claws to try to roll the boy onto his back, the grandfather said.

A neighbor alerted by the boy's screams raced over and scared the bear off by brandishing a pipe and yelling, Butler said.
Once Butler and his grandson were safely inside the house, the bear returned, walking up a wheelchair ramp and peering at them through screen door, Butler said.

"We thought he was coming through the screen," Butler said. "No doubt he was a big threat."

The bear was fatally shot by police a short time later.

Butler, and his wife, Christina Anderson, who was inside the house when the bear attacked, said the boy suffered a puncture wound to one thigh, bite marks on a foot and ankle and claw marks on his back.

State biologist Jenny Dixon said the risk of negative bear-human interactions is increasing as Connecticut's expanding bear population becomes acclimated to humans and develops a taste for their food.