A Black LGBTQ+ rights group called on the U.S. to get Brittney Griner out of Russia quickly as the State Department reclassified her status as being "wrongfully detained."

Griner was arrested in February at a Moscow airport and was accused of trying to bring vape cartridges containing oil derived from cannabis into the country. She has been held there since and is set for a hearing on May 19.

But with her reclassification status, National Black Justice Coalition deputy executive director Victoria Kirby York called on the government to bring her back to the country before they can’t guarantee her safety in Russia anymore.

"Brittney's status change is an important moment in the movement to bring her home safely and swiftly. It means there is now a two-pronged approach focused on both legal and political strategies," York said in a statement obtained by Fox News Digital.

"It has become clear that Brittney's legal team has acted in good faith to clear her name through Russia's legal system, and that the Russian government has been actively trying to leverage Brittney's detainment for political purposes tied to their war on Ukraine. This is unfortunate, especially because Griner’s status as a Black, lesbian, woman leaves her vulnerable to increased discrimination and abuse at the hands of the racist and homophobic Russian government.

"We urge the U.S. government to do all it can to bring her home before she is no longer able to maintain her safety in a nation at war." 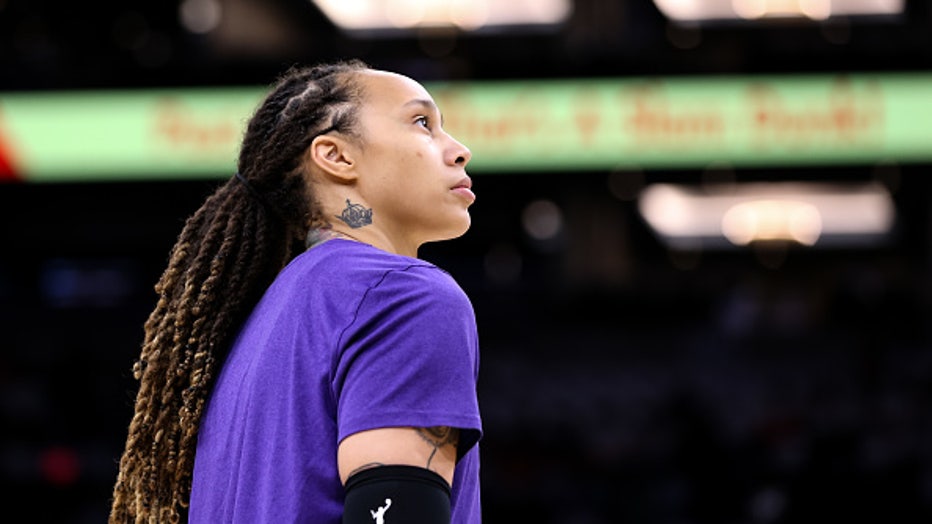 Brittney Griner #42 of the Phoenix Mercury durring pregame warmups at Footprint Center on October 10, 2021 in Phoenix, Arizona. NOTE TO USER: User expressly acknowledges and agrees that, by downloading and or using this photograph, User is consenting

"The welfare and safety of U.S. citizens abroad is among the highest priorities of the U.S government," a State Department spokesperson said. "The Department of State has determined that the Russian Federation has wrongfully detained U.S. citizen Brittney Griner.

"With this determination, the Special Presidential Envoy for Hostage Affairs Roger Carstens will lead the interagency team for securing Brittney Griner’s release."

Griner's family requested Richardson and the Richardson Center to work on her behalf to secure her return to the U.S.

"Brittney has been detained for 75 days and our expectation is that the White House do whatever is necessary to bring her home," the statement to Fox News Digital read.