The 31-year-old Phoenix Mercury basketball star was arrested in Russia last month after Russian officials allegedly found vape cartridges in her luggage and accused her of attempting to smuggle drugs into the country.

Reed, a former Marine from Texas who has been detained in Russia for more than two years, was freed in a prisoner swap, President Joe Biden announced Wednesday morning.

"The negotiations that allowed us to bring Trevor home required difficult decisions that I do not take lightly. His safe return is a testament to the priority my Administration places on bringing home Americans held hostage and wrongfully detained abroad," Biden said in a statement. 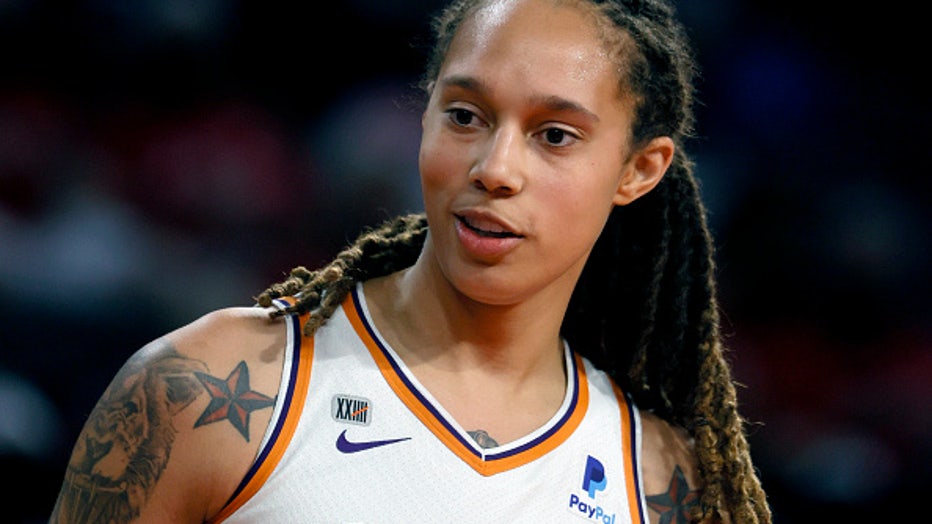 Brittney Griner #42 of the Phoenix Mercury stands on the court as the Las Vegas Aces shoot free throws during Game Two of the 2021 WNBA Playoffs semifinals at Michelob ULTRA Arena on September 30, 2021 in Las Vegas, Nevada. The Mercury defeated the A

U.S. Olympic gold medalist and WNBA champion Griner could face up to five years in a Russian labor camp after she was arrested in the country last month, an expert said.

Russian law expert Peter Maggs of the University of Illinois College of Law predicted that her pending legal case could result in a 5- to 10-year prison sentence, which could also include time spent at a labor camp, or a complete dismissal and exportation from the country.

"You're talking about five years, not jail time, but a labor camp," he said. "One thing I find a little worrisome is this extension of her preliminary holding from two months to three months, because you have to go to a higher authority to get it lengthened."

"It is illegal to bring all sorts of drugs into the country [Russia], including cannabis oil," Maggs said.

The law professor also speculated that Griner could be completely innocent of the accusations against her as Russian authorities are known to plant drugs on people to arrest them under false pretenses "if the regime wanted to get them in trouble."

"We don’t know what really happened," he added.

Austin NAACP is calling for more pressure on state and national representative.

Since the announcement of Reed’s release, social media has been abuzz with renewed calls for Griner to be released.

"This is great news! Truly. And quite the feat for Pres Biden & his team in the current environment," Sherrilyn Ifill, a civil rights lawyer, tweeted in response to the news. "Now #FreeBrittneyGriner."

"This is positive news. But the work is not done. Don't forget about Brittney Griner. #FreeBrittneyGriner," Joe Madison with Siruis XM tweeted.

"The US is being way to passive about  Brittney Griner being held in Russia. Not just a citizen but a professional basketball player who won 2 Olympic gold medals. This is unacceptable. #FreeBrittneyGriner," Mark Fischer said.

The Associated Press and FOX News contributed to this article