The losses will likely continue into May.

CHICAGO - While some fast-food chains have seen success under pandemic conditions, the Potbelly Sandwich Shop is considering a permanent closure of up to 100 company-owned stores as sales dropped by nearly 70 percent in March.

“We immediately went from a majority dine-in business to one that was almost completely off-premises,” he explained while noting store closures would strengthen the business amid the coronavirus crisis.

Cirulis added that stores that are being considered for the chopping block were not profitable before the pandemic. In fact, around 90 percent were already impaired.

Thirty-six Potbelly stores are temporarily closed due to the coronavirus, but some of these stores may be included in the permanent shutdown list.

Potbelly ended its first-quarter with 473 stores, 427 of which are company-owned and 46 are franchised. The closure of 100 stores would mean a decrease of roughly 21 percent.

Moreover, comparable sales plunged by 68 percent in March after steady growth in January and February with 2.5 percent and 4.1 percent, respectively. By the end of the quarter, comp sales dropped by 10.1 percent. Total first-quarter revenue was $87.6 million, a significant decline from the $98.1 million from Potbelly’s previous year. 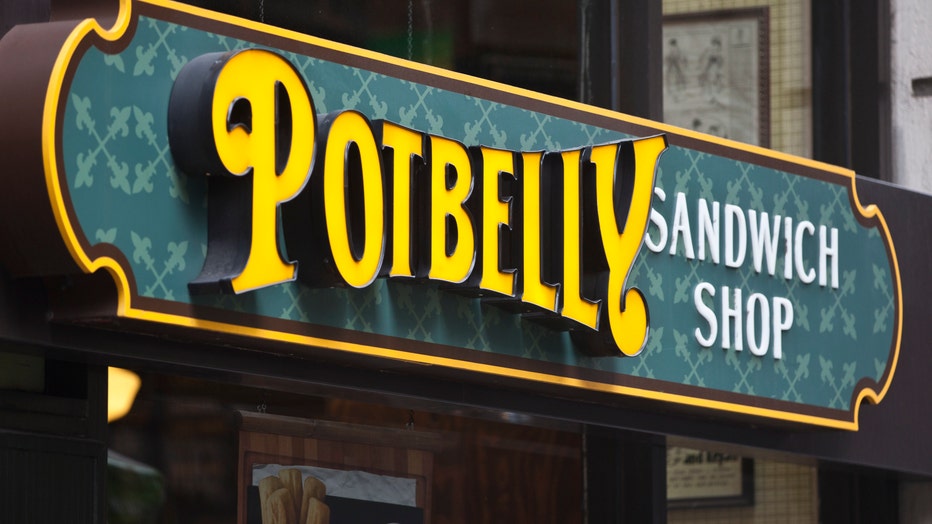 FILE - Pedestrians walk outside of a Potbelly Sandwich Shop in New York City. (Photo by Ramin Talaie/Corbis via Getty Images)

Potbelly’s losses have forced the company to furlough more than a third of its corporate employees and cut salaries by 25 percent for executives and non-furloughed corporate employees. Additionally, its board has deferred compensation for the first half of 2020 while merit increases, promotions, bonuses and 401(k) match have been suspended.

The company has been operating under “an extremely conservative cash preservation position,” according to Cirulis, who noted that Potbelly’s spending has dropped by 60 percent since the pandemic was first declared in mid-March.

In April, Potbelly returned $10 million it received from the federal government through the Paycheck Protection Program.

For the first week of May, Potbelly’s comp sales were down 45 percent. The company’s CEO, Alan Johnson, suggested this lift might be related to the reopening of Texas, which has relaxed dining mandates enough to get people to venture inside restaurants again. Potbelly saw a 10 to 15 percent increase in same-store sales in Texas, and similar results are reportedly happening in Arizona.

McDonald’s is preparing to welcome customers back into their dining rooms — but only after their new safety standards have been met.

“The good news is the dine-in business is not dead,” Johnson remarked. “People still want to come to Potbelly and enjoy the environment albeit in those markets we are still restricted as to occupancy.”

Meanwhile, Potbelly stores that don’t have open dining rooms have been operating curbside pickup, drive-thru, delivery and takeout services throughout the pandemic.

Additionally, the brand formed a grocery initiative named Potbelly Pantry in April, which has seen moderate success. More than 73,000 cookies were made with Potbelly’s cookie dough in a span of two weeks, Johnson said.

“While the pandemic has changed many things for us, we remain confident that the strategic foundation we were building prior to COVID-19 is as applicable in our recovery and beyond,” he added.

A month prior, Potbelly launched 52 Project Aurora test shops in multiple markets to grow the company and reportedly saw promising results before having to shut down for the pandemic.