It is the first time in the United States that drones will be delivering products in a major U.S. metro area.

FRISCO, Texas - Starting Friday, people in Frisco and Little Elm will be able to receive orders from unmanned drones.

It is the first time in the United States that drones will be delivering products in a major U.S. metro area.

With a click on an app from customers, employees at the Little Elm Walgreens will send packages on their way. For now, the service is free.

The future has arrived in Frisco. A 10-pound drone is now able to deliver packages up to three pounds to certain neighborhoods in Frisco and Little Elm. 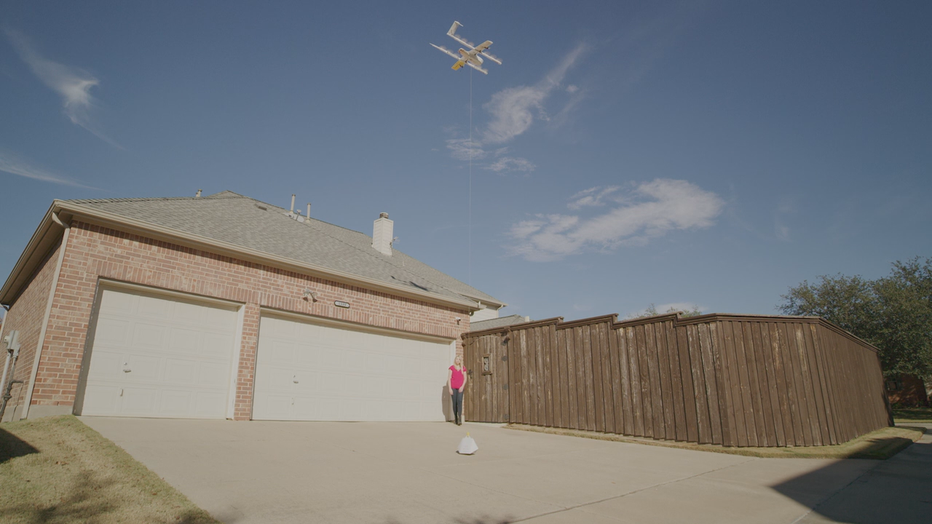 "Believe it or not, there will be a day when the residents of Frisco and Little Elm have packages flown to their homes. And they don't even take a selfie with it," said Margaret Nagle with Wing Drone Delivery Service.

When not flying, the drones will sit on six charging stations.

"If you were to order a box of pasta via drone delivery, you would use more energy boiling the water than we would use flying the item to your house," Nagle said.

But the drones are susceptible to one common Texas weather condition: too much wind. That grounded them on Thursday.

Wing Spokesman Jacob Demmitt said the drones otherwise do well in most weather.

"The drones are able to fly in light rains, light snow, and strong winds. But there is a limit," he said.

If the weather gets bad, pilots who work remotely stop deliveries.

The drones are already in use in Australia, Finland and a small town in Virginia. Right now, the service is free.

"Right now, our focus is on bringing this technology to major markets," Demmitt said.

He said drones are believed to be able to provide delivery for less money than traditional methods.

"If you think of someone driving a car or truck, one person driving a sandwich is a pretty expensive endeavor," Demmitt said. "Whereas with one of our drones, which weighs 10 pounds, one pilot can receive multiple aircraft simultaneously."

One item expected to be the most popular here in North Texas is Blue Bell ice cream.

"Today we can say we deliver by drone, and that is pretty cool," said Joe Robertson with Blue Bell.

"One day, we will have drones with people in them as future transportation modes, Learning how they work with vitamins is a lot easier than people," he said.

To receive a delivery at your house, you need an area the size of a picnic blanket that is free of trees for the drone drop-off.

The service is starting out to only a small area in Frisco and Little Elm Friday at 9:30 a.m.