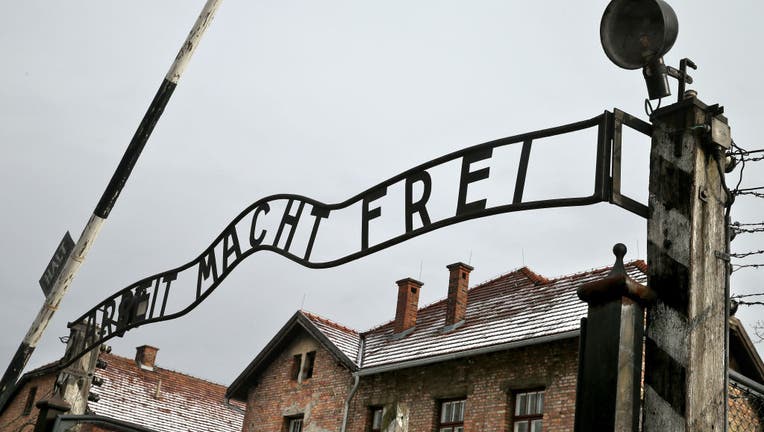 OSWIECIM, Poland - Police in Poland said they detained and fined a Dutch woman for making Nazi gestures at Auschwitz-Birkenau, a former concentration camp in Poland.

According to local reports, prosecutors said the woman was caught making a Hilter gesture at the entrance gate which reads "Arbeit Macht Frei" (Works Sets You Free). Prosecutors said guards spotted the woman as she was taking a photo by her husband.

Prosecutors issued the woman a fine after the woman confessed, calling her actions a bad joke, according to local reports.

RELATED: DCPS investigates after elementary students say they were forced to reenact Holocaust

Auschwitz-Birkenau, situated on 472 acres, is located 31 miles west of Krakow in a suburb of Oswiecim, a small city in southern Poland.

A Washington, D.C., public school librarian is under investigation after students and parents claim she made kids reenact the Holocaust. In a letter to parents at Watkins Elementary School, the principal said the staged reenactment included portraying participants of the holocaust like Adolf Hitler, digging ditches to serve as mass graves and simulated shootings. The staff member is also accused of making anti-Semitic statements.

Auschwitz was originally constructed as a labor camp for Polish prisoners in 1940, but was used to incarcerate — and kill — everyone from Jews to Gypsies to Soviet prisoners of war to homosexuals and conscientious objectors. Birkenau was built in October 1941 and was the site of the gas chambers and crematoria.

More than 1.1 million people, mostly Jews, were murdered at the former death camp by the Nazis and their henchmen. In all, about 6 million European Jews died during the Holocaust.

When families from across Europe reached Auschwitz in cramped windowless cattle trains, the Nazis selected those whom they could still use as forced laborers. The others, old people, many women and especially children and babies, were gassed to death soon after arrival.

Today, the site of Auschwitz-Birkenau endures as the leading symbol of the terror of the Holocaust. Its iconic status is such that every year it registers a record number of visitors — 2.3 million last year alone.

The Associated Press and FOX News contributed to this report. This story was reported from Los Angeles.