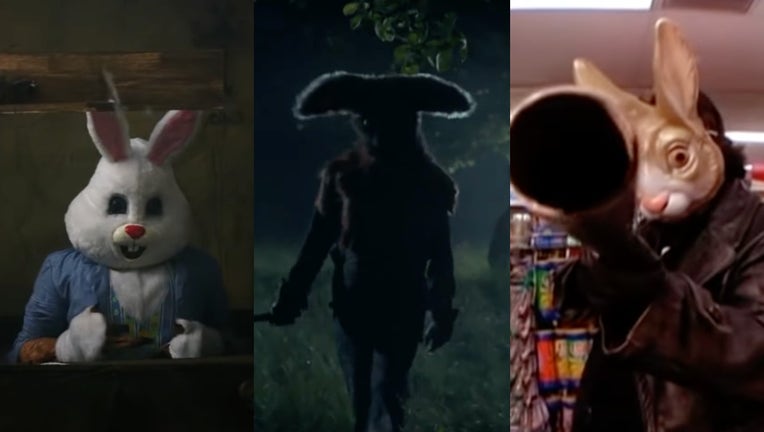 CHICAGO - With an extensive library of independent and international genre films, Tubi is an adventurous movie lover’s secret weapon. In a new monthly column, film critic Katie Rife picks the month’s best horror, fantasy and sci-fi movies to stream for free. Read on for her April picks, including some nightmarish Easter bunnies, an "Exorcist" and a zombified spring break. 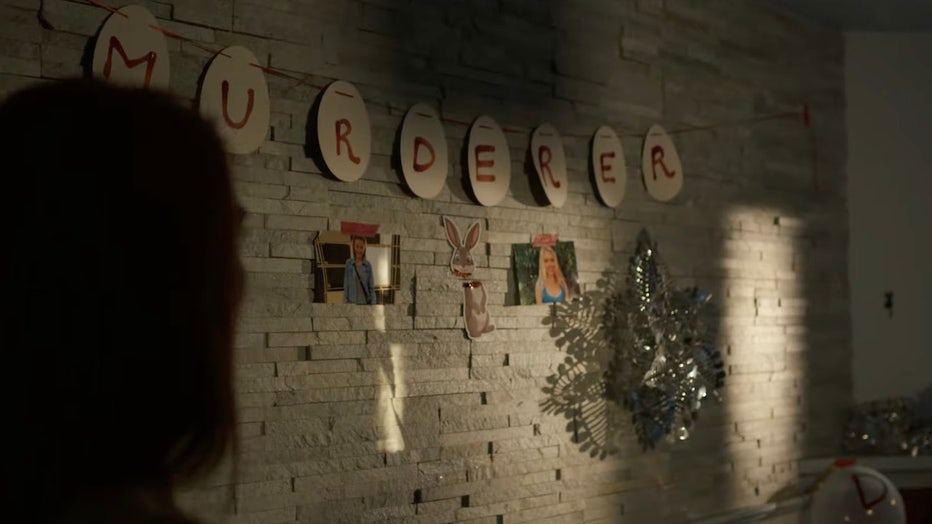 When it comes to holiday horror, Halloween is a gimme. Christmas has gained quite a bit of ground over the years, with Valentine’s Day, New Year’s Eve and the Fourth of July all competing for third. But Easter has never produced a great horror film, except for maybe "The Passion of the Christ." Christianity has never been opposed to using horrifying imagery to get its message across. And this movie’s depiction of Jesus’ crucifixion is explicit enough that there’s a strong argument for it as a body horror movie — or torture porn, even. (Roger Ebert called it "the most violent movie I have ever seen" in his four-star review.)

Another close call is "Dead Snow," the Norwegian zombie movie about a group of college kids who battle undead Nazis — and whose sequel, "Dead Snow 2: Red vs. Dead," is on Tubi. "Dead Snow" does take place over Easter break, which gives our stock group of soon-to-be-zombie food an excuse to set out to the remote cabin where the good and gory stuff will take place. But that part of Norway is still blanketed in snow in the springtime. That makes "Dead Snow" more of a snow-day horror movie than an Easter one, at least for those of us who live south of Alberta.

Are furry rabbits and pastel eggs and daffodils blooming in the sunshine simply too cheerful for nightmare fuel? Nonsense. If Santa Claus can be terrifying, so can the Easter bunny. And many a DIY filmmaker with dreams in their heart and a mascot costume soaked in corn syrup has tried to make it so. In fact, if you’re planning on buying a case of beer and only half paying attention, Tubi has a full selection of charming low-budget efforts like "Easter Bunny, Kill! Kill!," "Easter Bunny Massacre," "Peter Rottentail" and "Rottentail." (That last title came out 14 years after "Peter Rottentail," and therefore owes its predecessor something. Maybe a nice chocolate bunny? The good kind, not the hollow, overly sweet one.)

An exorcism for Easter

Compared to Christmas, Easter retains more of its religious connotations, which technically makes any possession movie — a subgenre that’s overwhelmingly Catholic — seasonally appropriate viewing fare. But just clicking on the poster art for a movie called "The Exorcism of [Female name]" can be risky. 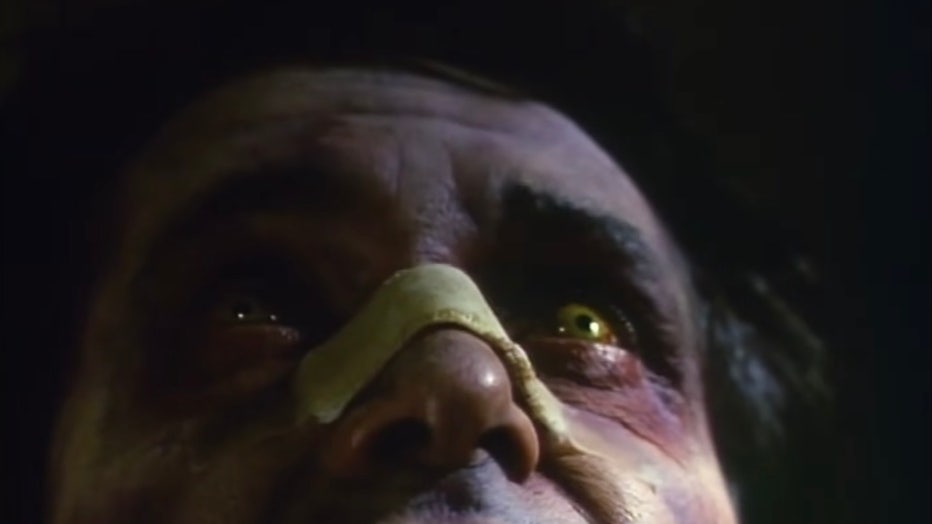 For an unholy commingling of bloodlust and religious ecstasy, try "The Exorcist III," directed by William Peter Blatty. Blatty, who wrote the original novel "The Exorcist," was a believer who remained a devout Catholic until his death. That gives the film’s bravura climax that all-important sense of conviction, as Hell literally opens up inside a prison cell mid-exorcism. "The Exorcist III" is a pretty terrific serial-killer thriller as well, featuring perhaps the most skillfully crafted jump scare in horror history. 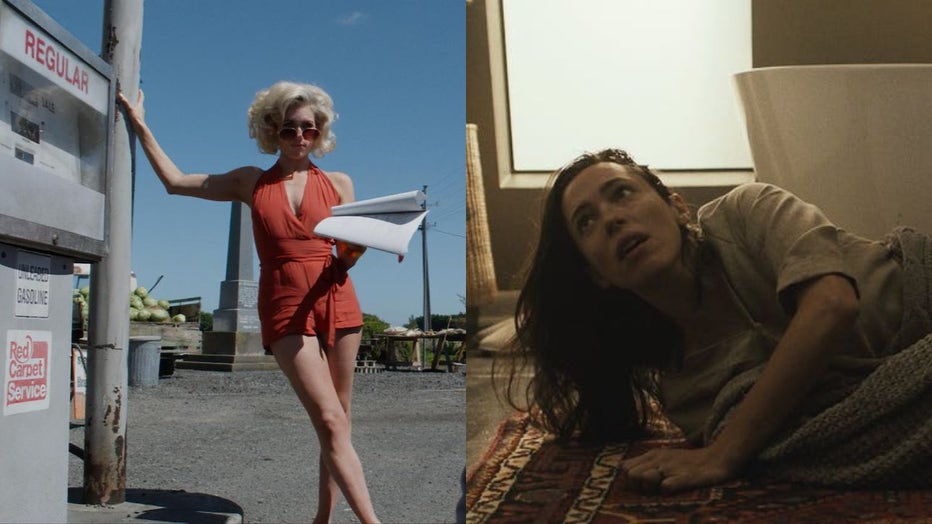 Brittany Snow in "X" (A24), Rebecca Hall in "The Night House" (WarnerMedia)

On a more secular note, indie-horror darling Ti West’s new movie "X" is now available on demand after a buzzy run at the box office. Tubi has two of West’s films available for streaming. And of the pair, the one that’s aged best is another retro throwback, "The House Of The Devil." The economy of storytelling in West’s tribute to horror films of the late ‘70s and early ‘80s is downright elegant, giving the film (and the audience) a chance to breathe in between moments of disturbing violence. Speaking of holiday horror, its style is reminiscent of one of the classier proto-slashers, the original "Black Christmas" — another film that manages to be both hushed and shocking. "The House of the Devil" stars Jocelyn Donahue as a college student who answers the wrong wanted ad, along with an early role for a pre-fame Greta Gerwig as the BFF with fantastic ‘70s hair and a brutal onscreen death.

Also new on digital and HBO Max is David Bruckner’s "The Night House," featuring a stunning lead performance from Rebecca Hall. As a woman who discovers a disturbing undercurrent in her late husband’s work, Hall complicates the movie stereotype of the grieving widow in all the right angry, bitter, f***ed-up ways. Hall’s great in everything she does, but you can see her give a similarly stormy performance as another troubled woman in 2017’s "Christine." Directed by Antonio Campos, "Christine" dramatizes the true story of Florida news anchor Christine Chubbuck, who entered the annals of macabre history on July 15, 1974. (You’ll have to Google her to get more details.) In Campos’ film, Hall conveys the corrosive effect of a thousand sexist microaggressions on an ambitious soul in an exhausted, fed-up performance that doesn’t try to justify what Chubbuck did, but understands why she did it.

And if you’re all caught up and waiting to watch more of Marvel's "Moon Knight," Tubi’s catalog includes several films by Justin Benson and Aaron Moorhead, who directed episodes two and four of the Oscar Isaac superhero series. When they’re not slumming it for Disney, the duo specializes in lo-fi, high-concept indie sci-fi. And "The Endless," about two brothers who return to the UFO cult compound where they grew up after receiving a mysterious VHS tape in the mail, may be their finest film to date. It’s a well conceived and ingeniously shot mindbender of a movie, incorporating mystery spots, time loops and unseen energies that defy the laws of physics into a story where you actually care about the characters as well as the uncanny forces shaping their fates.

About the writer: Katie Rife is a film critic, programmer, and former Senior Writer of The A.V. Club. Her work has appeared in Rolling Stone, Polygon and Vulture, among other outlets.

Da Hip Hop Witch (2003): Eminem’s face may be on the cover image for this hip hop "Blair Witch" spoof, but he’s not exactly the star. (That is, perhaps, one reason Artisan Home Entertainment had to recall copies of the film on DVD and VHS in 2003.) Instead, the film follows a group of white teenagers who set out to capture the titular witch, a malevolent entity who targets rappers. Mr. Mathers plays himself, as do Ja Rule, Vitamin C, Prodigy and Havoc (better known as rap duo Mobb Deep), Rah Digga and Vanilla Ice. Rated R. 85 minutes. Dir: Dale Resteghini. Also featuring: Dale Resteghini, Stacii Jae Johnson.

Vicious Lips (1986): This campy grindhouse horror follows an all-girl hair band (the titular Vicious Lips) as they take their act on the road — or whatever you call a tour that’s intergalactic. On the space road? The asteroid belt? Whatever you call it, the trek takes them to the far-flung reaches of the galaxy, where terrors (and power chords) await. Rated R. 80 minutes. Dir: Albert Pyun. Featuring: Dru-Anne Perry, Tony Kientiz, Linda Kerridge, Gina Calabrese, Don Barnhart Jr.