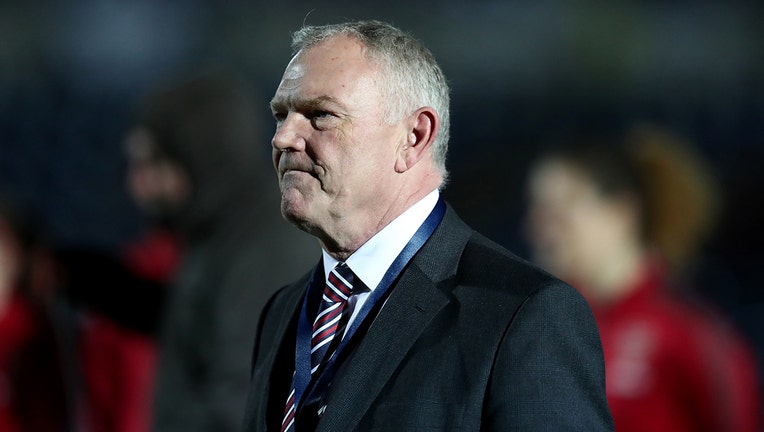 Greg Clarke, chairman of the FA during the WSL Continental Cup Final between Arsenal Women and Manchester City Ladies at Adams Park on March 14, 2018 in High Wycombe, England. (Photo by Catherine Ivill/Getty Images)

LONDON - The head of English soccer abruptly resigned Tuesday within hours of making a series of offensive comments on race, gender and sexuality.

Answering questions at a British parliamentary hearing, Football Association chairman Greg Clarke referenced “colored footballers," claimed South Asian people have “different career interests” than playing the game, said being gay was a “life choice" and suggested women don't like having the ball kicked at them.

“My unacceptable words in front of Parliament were a disservice to our game and to those who watch, play, referee and administer it,” Clarke said. “This has crystallised my resolve to move on.

"I am deeply saddened that I have offended those diverse communities in football that I and others worked so hard to include.”

The 63-year-old Clarke remains — for now — a vice president of FIFA.

Having only issued a partial apology during the select committee session, Clarke faced growing criticism from anti-racism campaigners.

Clarke's resignation was issued just as a virtual news conference was being held with England defender Tyrone Mings, who helped the FA form a new code last month to increase gender and ethnic diversity in coaching and senior leadership positions, with targets set for recruitment.

“We all have a long way to go and if anything has come from this year, a lot of uncomfortable conversations have made a lot of people aware of the problems we are facing in society. Things like this are not ideal,” Mings said.

“But at the same time we have a duty of care to understand what is going on in the world and understand what terminology you can and cannot use. And if you fall foul of that or there is a slip of the tongue, be man enough and brave enough to apologize for it.”

Sanjay Bhandari, the executive chair of anti-discrimination group Kick It Out, said he was “extremely disappointed” by Clarke's comments during the House of Commons committee appearance.

“His use of outdated language to describe Black and Asian people as ‘colored’ is from decades ago and should remain consigned to the dustbin of history,” Bhandari said.

“These comments indicate that more still needs to be done to challenge attitudes. For all the steps made forward recently, the comments expressed today are a big step backwards.”

Bhandari was particularly critical of Clarke's “lazy racist stereotypes about south Asians," who are the most underrepresented ethnic minority in English teams.

“If you look at top-level football, the Afro-Caribbean community is overrepresented versus the south Asian community,” Clarke told legislators. “If you go to the I.T. department at the FA, there’s a lot more south Asians than there are Afro-Caribbeans. They have different career interests.”

“If I said it I deeply apologize for it,” Clarke said when asked later about it in the committee hearing. “I am a product of having worked overseas. I worked in the USA for many years where I was required to use the term, ‘People of color,’ and ... sometimes I trip over my words.”

Former England player Darren Bent, who is Black, tweeted: “Slip of the tongue was it, awful just awful.”

Clarke's reference to sexuality being a “life choice” came while talking about the lack of openly gay male footballers in England.

"I would never pressure anybody to disclose their sexuality," Clarke said. “What I would want to do is to know that anybody who runs out onto the pitch and says on Monday, ‘I’m gay and I’m proud of it and I’m happy and it’s a life choice' ... they would have the support of their mates in the changing room."

Further rebuking Clarke, Bhandari said: “Being gay is not a ‘life choice’ as he claimed.”

There was disquiet that Clarke also vaguely referenced what he said a coach told him about female goalkeepers.

“She said, ‘Young girls, when they take up the game (aged) 6, 7, 8, just don’t like having the ball kicked at them hard’, right? They prefer to kick it than have it kicked at them,'” Clarke said. "We have to understand we need to look at different ways to bring women into the goalkeeper’s position.”

There was an outcry three years ago when Clarke appeared at the same select committee overseeing sports and he dismissed some concerns about racism within the FA as “fluff.”

“This isn’t the first time that the FA has come to grief over these issues,” committee chairman Julian Knight pointed out after Tuesday's hearing. "It makes us question their commitment to diversity.”

The FA said board member Peter McCormick will become interim chairman as it begins the search for Clarke’s successor.