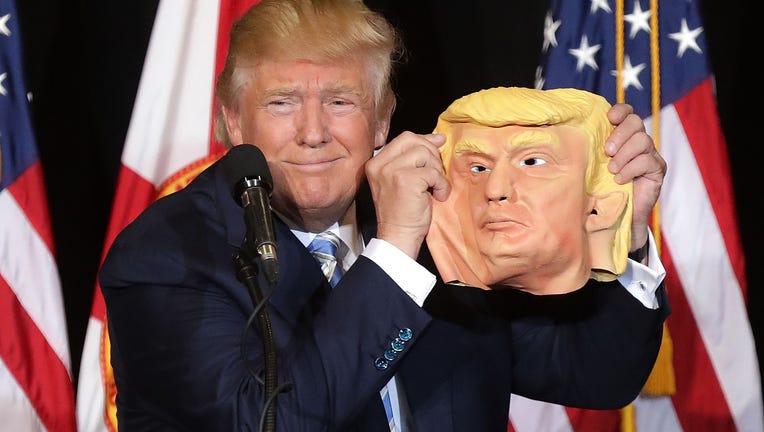 SARASOTA, FL - NOVEMBER 07: Republican presidential nominee Donald Trump holds up a rubber mask of himself during a campaign rally in the Robarts Arena at the Sarasota Fairgrounds November 7, 2016 in Sarasota, Florida. With less than 24 hours until E

NAPLES, Fla. - Authorities say a 14-year-old Florida girl punched a man dressed as President Donald Trump in line at a Florida haunted house while her friends recorded it.

The Naples Daily News reports that the girl could face a misdemeanor charge of battery for the Saturday attack. Authorities withheld the girl’s name because of her age.

The Collier County Sheriff’s Office says the man and his family were in line to go into the Naples Haunted Gross House exhibit at the county fairgrounds when the girl walked over to him and punched him in the jaw.

The man told officials that the girl laughed and then ran away. The victim reportedly approached the girl and asked why she punched him before asking a deputy to report the incident.

USA Today reports that authorities interviewed the girl's parents. Video of the incident was reportedly posted to Instagram.

According to USA Today, deputies told the girl's parents that due to the nature of the crime and "that the sole motivation was to strike 'Trump'," detectives may follow up with them.

The girl was kicked out of the fairgrounds and may face charges following an investigation.