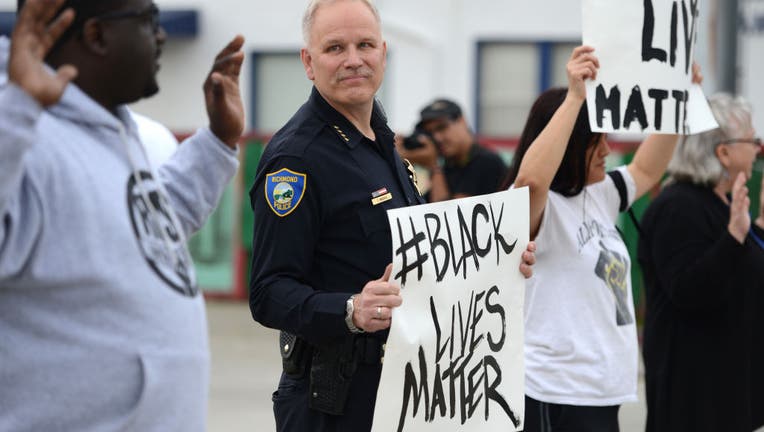 PHOENIX (AP) - The Tucson, Arizona, police chief on Wednesday - who gained national attention six years ago by holding a "Black Lives Matter" sign in the Bay Area - offered his resignation after a 27-year-old man died while handcuffed and placed face-down, resulting in the resignation of three officers the chief said had violated department policy.

Chief Chris Magnus, who was hailed as a progressive police chief of Richmond until he left in 2015, offered his resignation during a news conference a day after the death of Carlos Ingram-Lopez on April 21 became public, acknowledging the department had failed to disclose the death in a timely manner. The city council and city manager have to approve the resignation.

The medical examiner’s office didn’t determine a manner of death but said Ingram-Lopez had died of sudden cardiac arrest while intoxicated by cocaine and physically restrained.

Ingram-Lopez was face-down on the ground with a blanket over his head when he stopped breathing. Police had gone to his home after his grandmother called them because he was acting erratically.

Mayor Regina Romero said she was surprised by Magnus' resignation offer and needed to think about it, adding that he has been “an honest and great” police chief.

Romero, a Democrat, said she was deeply troubled and outraged by what she saw on a video of the incident. She said Ingram-Lopez was clearly in distress and police must be held accountable.

“Events like this remind us that even some of the most progressive police departments with some of the most forward-thinking policies and rigorous training are not immune to failure,” Romero said.

The case emerged as Americans around the country protest police brutality, which disproportionately affects Black Americans and Hispanics. This week, activists have called on authorities to further investigate the shooting death of a young Hispanic man in Gardena, south of Los Angeles. Police say 18-year-old Andres Guardado was shot by a sheriff’s deputy last Thursday. Ingram-Lopez was also Hispanic.

Magnus, who was appointed chief in 2016, said three of the officers who responded “committed multiple policy violations and failed to handle the incident consistent with their training.” The three officers resigned but would have been fired anyway, Magnus said.

“I can’t say enough, this is a terrible tragedy and I had a chance to meet with the family earlier today to express my condolences and to let them know how much I sympathize with the loss of Carlos,” Magnus said.

The criminal investigation into Ingram-Lopez's death was sent to the county attorney's office, which has yet to determine whether it will file criminal charges against the officers.

A video shown to the press on Wednesday shows Ingram-Lopez running around a dark garage hysterically before officers handcuff him, yelling at him to calm down. The video quality is low due to poor lighting, but Ingram-Lopez can be heard thrashing, asking for water numerous times and whimpering as he lays face-down on the ground. At one point he says he can't breathe, Magnus said.

Eventually, an officer puts what appears to be a yellow plastic blanket over his entire body, and adds another blanket soon after.

Ingram-Lopez is heard crying over and over and saying “no” repeatedly as he’s on the ground and covered. After a few minutes, he stops making noise or moving.

Magnus said he has asked the FBI to investigate. He said that although he was briefed the day after Ingram-Lopez's death, nobody in his administration viewed the video then. He called the failure to make the death public a misstep but said it was not done with malicious intent.

When Magnus left Richmond five years ago, the violent crime rate had dropped to historic lows. In 2013, six years after the city was removed from being ranked among the nation's 10 most dangerous cities, Richmond had its lowest homicide total in 33 years.

Magnus first gained nationwide attention in 2014 for holding a sign reading “Black Lives Matter” at a peaceful protest. He was criticized by his department’s rank-and-file for doing so in uniform.

At the time, Magus said: “When did it become a political act to acknowledge that 'black lives matter’ and show respect for the very real concerns of our minority communities? This should not be about 'us versus them.’ It should be about finding ways to build bridges and address the schism that exists between many of our residents and police.”