KILLEEN, Texas - The commander of the US Army's Fort Hood is being removed from his post as part of a previously-scheduled change in leadership and will no longer be transferred to Fort Bliss.

Maj. Gen. Scott Efflandt will remain at Fort Hood and continue to serve as deputy commanding general for support. Due to this, the Army will name a new commander for the 1st Armored Division at Fort Bliss in El Paso in the coming days. 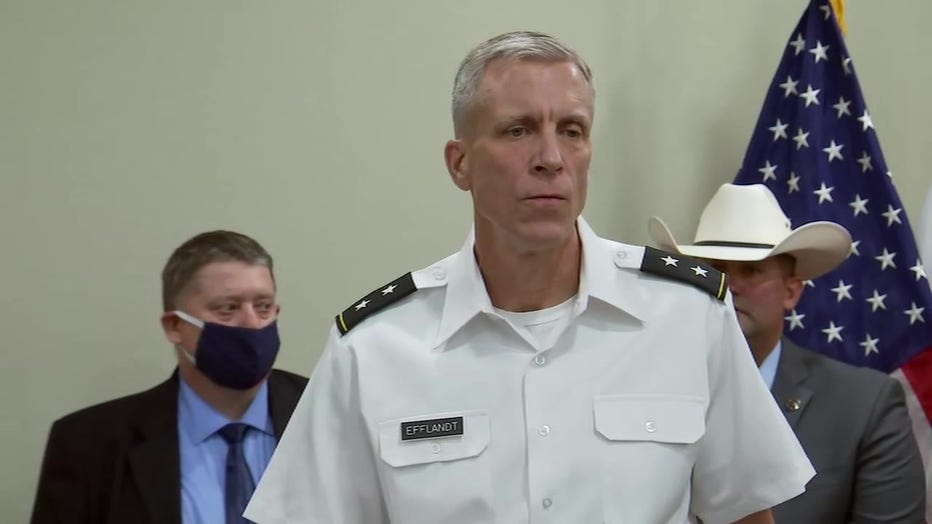 Maj. Gen. Scott Efflandt attends a press conference in July to discuss the status of the investigation into the disappearance of Spc. Vanessa Guillen.

This previously-scheduled change in leadership will enable continuity of command as III Corps returns from its role leading the Combined Joint Task Force-Operation Inherent Resolve, says the US Army.

The panel will review historical data and conduct interviews with military members, civilians, and members of the local community.

Maj. Gen. Richardson previously served as FORSCOM’s director of operations and was selected in March to serve as the next DCG for III Corps.

The Army also announced that Garrett will appoint Gen. John Murray, commanding general of Army Futures Command, and one of the Army’s most senior commanders to lead an in-depth investigation into the chain of command actions related to Spc. Vanessa Guillen.

Guillen went missing from Fort Hood in April and her remains were found in a shallow grave near the Leon River in Bell County in June.

Cecily Anne Aguilar, 22, of Killeen was arrested for second-degree felony tampering/fabricating physical evidence with intent to impair a human corpse in connection with Guillen's disappearance and murder. Federal authorities have also filed a conspiracy to tamper with evidence charge. Officials say Aguilar is the estranged wife of a former Fort Hood soldier.

Fort Hood officials confirm remains found in Bell County to be that of Spc. Vanessa Guillen

Using DNA samples, the remains were identified by the Armed Forces Medical Examiner System at Dover Air Force Base in Delaware.

The other suspect in Guillen's disappearance was identified Thursday as Spc. Aaron David Robinson of Calumet City, Illinois. Robinson took his own life when law enforcement attempted to make contact with him after he fled from Fort Hood.

The criminal complaint against Aguilar shared by the US Attorney's office says that Robinson told Aguilar that he killed a female soldier by striking her in the head with a hammer while on Fort Hood on April 22. Robinson further admitted to her that he transferred the woman’s body off base to a remote site in Bell County. Subsequently, Robinson enlisted her help in disposing of the body.

RELATED: Army: Fort Hood has some of the "highest numbers" of violent acts, sexual harassment cases

The proposed "#IAmVanessaGuillen" bill, written by the Guillen family’s attorney Natalie Khawam, will allow soldiers to report their sexual harassment or assault to an agency outside their chain of command. If passed, it will provide a safe and independent way to protect a soldier’s rights without fear of retaliation.

The US Army says there are currently several investigations underway at Fort Hood tasked with reviewing a wide range of topics and concerns. Gen. Murray will roll those efforts into a more complete and comprehensive investigation into all activities and levels of leadership.

Trump announced the FBI and DOJ have been assigned to investigate this case and figure out what happened, but also prevent anything like it from happening again.

Murray’s investigation, which will be conducted under the provisions of Army Regulation 15-6, is separate from the Independent Review of Fort Hood, which began in August. Five civilian members of the committee conducting the review arrived in Killeen Sunday for a two-week fact-finding mission.

The Fort Hood Independent Review Committee will examine the command climate and culture at Fort Hood and the surrounding military community to determine whether they reflect the Army's commitment to safety, respect, inclusiveness, diversity, and freedom from sexual harassment. Members of the committee plan to meet with unit leaders, Soldiers, local officials, law enforcement, and community groups while in Killeen.