AUSTIN, Texas - Gov. Greg Abbott and Lt. Gov. Dan Patrick on Monday urged the Supreme Court of Texas to take up Attorney General Ken Paxton's appeal to throw out a whistleblower lawsuit against him.

The appeal is Paxton's latest attempt to avoid a trial after eight of his former top deputies accused him of bribery and abuse of office in late 2020. Within seven weeks of their complaint to authorities, all eight had either been fired or driven to leave the agency. Four of the fired employees later filed a whistleblower lawsuit against Paxton saying they were fired in retaliation for their complaint and have asked to be reinstated to their jobs. Paxton denies wrongdoing.

Paxton, a Republican, has fought that lawsuit, claiming that the state's whistleblower law — which covers public employees, appointed officials and governmental entities — does not apply to him because he is an elected official. A district court and an appeals court have ruled against Paxton's lawyers and said the lawsuit could move forward. But in January, Paxton's lawyers asked the Texas Supreme Court to reconsider the matter and throw out the case. 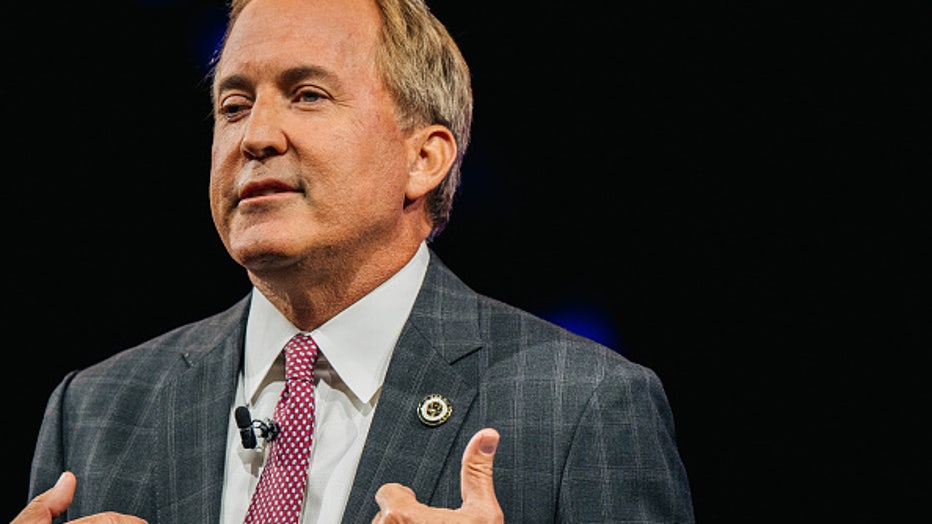 Texas Attorney General Ken Paxton speaks during the Conservative Political Action Conference CPAC held at the Hilton Anatole on July 11, 2021 in Dallas, Texas. CPAC began in 1974, and is a conference that brings together and hosts conservative organi

Paxton's lawyers argue that allowing whistleblowers to sue the attorney general for firing them could hamper the executive power that the state constitution gives him. It is the same argument two lower courts have already rejected after hearing from the whistleblowers' lawyers, who argue that siding with Paxton would take away whistleblower protections for employees trying to report the misconduct of an elected official.

Lawyers for the governor's and lieutenant governor's offices did not indicate whether they agree with Paxton's argument. The two Republican state officials filed friend of the court briefs asking that the high court take up the case because it is relevant to statewide governance and to the powers of an executive office under the Texas Constitution. Because of that, lawyers for the offices argued the case should be considered by a statewide court and not by the local courts that have already rejected Paxton's argument.

The two lower courts were filled by Democrats. The Texas Supreme Court is made up of nine Republicans.

Abbott's and Patrick's offices did not immediately respond to requests for comment.

The court also received a friend of the court brief from Kent Hance, a lawyer and former lawmaker, from a law firm that represented Nate Paul, an Austin real estate investor, in a lawsuit tied to the whistleblowers' complaints. The whistleblowers allege that Paxton was improperly getting the office of the attorney general involved in legal matters tied to Paul, who was a Paxton political donor.

The political action committee for Hance's law firm, Hance Scarborough, also donated $25,000 to Paxton's campaign in 2020, just weeks after Paxton's office became involved in a lawsuit involving two entities controlled by Paul's World Class Holdings and the Roy F. and Joann Cole Mitte Foundation, an Austin-based nonprofit. Representatives from the law firm have previously said they regularly give to the attorney general's office, even before Paxton's tenure.

The attorney general's office is required by law to be notified of cases involving nonprofits in case it wants to help them, but it rarely does so. Against advise from lawyers in the attorney general's office, Paxton became involved in the lawsuit and pushed the parties to settle, according to the whistleblowers and a lawyer for the charity. Paxton even considered appearing personally in the Travis County District Court for the case, an action rarely taken by an attorney general. Whistleblowers said they convinced him not to do it.

In October 2020, after the whistleblowers' complaints became public, the attorney general's office withdrew from the case.

Hance did not mention his firm's ties to the whistleblower case in his brief. He said he was filing his brief as a former elected official concerned about the case's impact on the functionality of government.

Hance said members of the executive branch choose "inferior employees" to help them with policymaking goals as determined by the elected official.

"But what happens [when] they are at odds?" he wrote. "Are you to require the Governor take advice from an inferior officer when their advice is adverse to his or her stated goals? Would the justices themselves be required to be subject to the counsel of clerks who disagree with their rulings?"

"If this Court were to leave in place the decision of the Third Court of Appeals, it would place in jeopardy the very foundations of our governmental system and require elected officials to rely on advice that is adverse and hostile to their own duly established policy goals as a statewide elected official," he said.

Hance did not immediately respond to requests for comment.

Ken Paxton, who came under fire with allegations of bribery and abuse of office by seven of his senior aides, will not resign as the state’s top lawyer.

Separately, Paxton is also fighting six-year-old allegations of securities fraud. He is accused of persuading investors to buy stock in a technology firm without disclosing he would be compensated for it. He was a member of the Texas House at the time. Paxton denies any wrongdoing in that case and says those accusations are politically motivated.