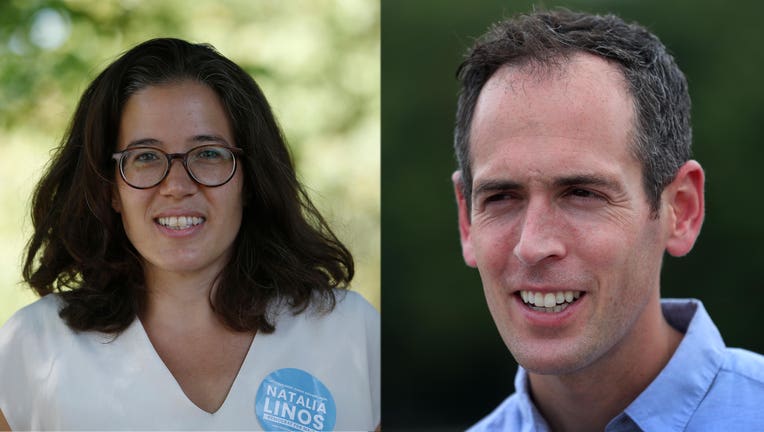 Natalia Linos, a Democrat vying for the fourth Congressional Democratic nomination in the primary race, poses for a portrait in Newton, Mass. on Aug. 23, 2020, alongside 8th Congressional race candidate, Dr. Robbie Goldstein, an infectious disease sp

BOSTON - A background in science — specifically, infectious disease and epidemiology — may not spring to mind as a key selling point for candidates hoping to land a seat in Congress.

Not unless, say, the country is in the throes of a deadly pandemic.

Two Democrats in Massachusetts are highlighting their disease expertise as they pitch themselves to voters in the state's Sept. 1 primaries, while at the same time arguing that their focus on the coronavirus and its social fallout also gives them a unique perspective on a host of other issues — from health care and housing to racial inequality and the environment.

Natalia Linos is a social epidemiologist and executive director of the FXB Center for Health and Human Rights at Harvard University. She's also a candidate in the crowded race to replace U.S. Rep. Joe Kennedy III in the state’s 4th Congressional District.

Kennedy is challenging incumbent U.S. Sen. Edward Markey in the state’s Democratic primary, creating an open race to fill his seat. Linos is one of eight candidates vying for the party’s nomination in the blue-leaning district.

Linos, who spent a decade working at the United Nations before landing at Harvard, said she hadn’t intended on jumping into the race. Then President Donald Trump announced earlier in the year that he would withdraw the U.S. from the World Health Organization — a decision Linos said baffled her, coming in the midst of the fight against the pandemic.

“I entered the race because I felt I had a unique skill set for this moment,” Linos said. “If we had more people in Congress with a science background, we might have made better decisions.”

The 38-year-old mother of three has lived off and on in Brookline, a suburb of Boston, for the past seven years. She grew up in Greece and spent much of her life overseas. She said that global perspective has made the federal response to the coronavirus pandemic in the U.S. look even more disappointing.

“With a country that is so wealthy with some of the best doctors and nurses, that is unacceptable,” she said.

Here are the symptoms of COVID-19

Some of the most common symptoms are fever, a dry cough, shortness of breath and fatigue. But as the virus continues its rapid spread, additional symptoms are being identified.

The pandemic has exposed other fault lines that already existed in the country, Linos said, including access to health care and housing and a failure to address the environmental challenges facing the nation and the globe.

“We need to make sure that a lot of money in the federal response is putting us on a green path,” she said of virus relief packages. “The only silver lining is if the recovery is linked to the Green New Deal.”

Two Republicans are also running — Julie Hall and David Rosa. Both are veterans and face a uphill challenge in a district that has historically supported Democrats.

Medical backgrounds are also playing a role in other races in the state. Robbie Goldstein, a 36-year-old South Boston resident, is challenging longtime incumbent U.S. Rep. Stephen Lynch in the state’s 8th Congressional District in the Democratic primary.

As an infectious disease specialist and doctor at Massachusetts General Hospital, Goldstein has focused on those living with and at risk for another virus: HIV.

But when the coronavirus engulfed the state in the spring, Goldstein found himself in the hospital’s intensive care unit caring for patients on ventilators because of COVID-19.

Goldstein said he’s had a front row seat to what he considers the federal government’s disastrous handling of the pandemic. Back in March, he recalled talking with his colleagues about not having enough tests or enough personal protective equipment.

“Those are the same questions we are asking now,” he said. “There should have been a plan for the distribution of PPE, for the equitable distribution of treatments. There is no way to look at the federal response and see anything but failure.”

Goldstein said he was spurred to run after hearing about problems his patients talked to him about that he couldn’t solve as a physician — from expanding their access to health care to helping them pay the rent.

Still, he said his job as a doctor remains top of mind for most voters he's met during the campaign.

“I can’t go anywhere in this district and not talk about anything but my experiences as an infectious disease doctor,” he said.

Goldstein said he also sees himself as part of a wave of younger Democratic candidates trying to push the party toward a more progressive agenda. He said he’s convinced there is a path to victory for a progressive candidate in what’s been seen as a more moderate or conservative Democratic district.

“I think choice is a great thing,” she said. “I think choice and competition make policy and politics and politicians better.”
Candidates with medical credentials have run for higher office elsewhere in the 2020 election cycle — not always succeeding.

Trauma surgeon Manny Sethi lost this month's Republican primary for an open U.S. Senate seat in Tennessee. Trump had thrown his support behind Sethi's opponent, but the doctor also was criticized for not wearing a mask at his events.