A Ukrainian zoo is pleading for help amid Russia’s invasion. The park shared videos of damaged cages and enclosures, which has forced the few remaining staff and volunteers to take desperate measures.

Feldman Ecopark in Ukraine’s Kharkiv Oblast shared video on April 5 showing the damage recent shellings left behind. Zoo officials said the larger predators are some of the last to go and while a few animals suffered injuries, keepers are hopeful they can get the animals adequate treatment before considering euthanization.

"Now we are negotiating with a large number of people and organizations, in particular - with those who can accept our animals in Ukraine and beyond," the zoo’s Facebook post read.

Zoo officials also noted the challenges ahead of getting large predators, such as lions, tigers and bears, out of the facility and are asking for more volunteers to help.

"Such an operation requires the availability of special transport and the participation of quite a large number of people," the Facebook post continued.

In late March, the zoo published a sobering post about a 10-month-old baby buffalo that was orphaned after Feldman Ecopark was shelled on March 31, killing the baby’s parents.

"Probably, these were strategic bison bred in secret biological laboratories, which pose a special danger to the Russian Federation," one of the park's posts noted with a heap of sarcasm. "As a result, the mother died, the child was left alone. There is no possibility to take it out without putting people's lives in significant danger: the area of the enclosure is directly shot from enemy positions."

Videos of a Ukrainian man driving animals to safety have made their way around social media, most notably a video of Ukraine’s only family of tapirs, a rare mammal species that have been around for millions of years, according to Tapirs.org.

Fortunately, the three tapirs, named Dalma, Pinto and Dolly, arrived at their temporary home in the Poltava region, according to an update posted on the zoo’s Facebook page on April 3.

Another video, shared by Ukraine’s foreign ministry on March 26, showed a group of marsupials huddled together in the back of a van, driven by the same Ukrainian man who rescued the tapirs, headed to safety.

The man shown in both videos has garnered international praise for his heroic actions.

"This guy is a legend. Ukraine should rename the zoo after him when they‘ve won the war," one person tweeted.

"It’s the same dude who evacuated the kangaroos. Hero," another person said on Twitter.

The zoo appears to be continuing evacuation efforts and has asked for donations that will not only help rescue the animals and find temporary homes and care but assist in humanitarian efforts as well.

"We still need a variety of help: physical, logistical, and financial, pet feed etc. p. But such generous support gives hope that we can save as many animals as possible. A huge thank you to everyone who promptly connected and supported us, it was very important today," according to the zoo’s Facebook. 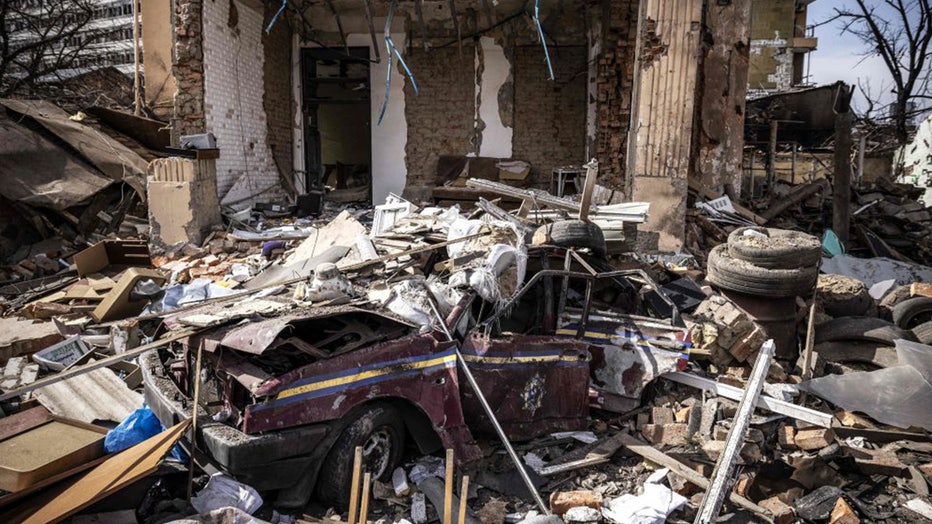 FILE - This photograph taken in the eastern Ukraine city of Kharkiv, on April 2, 2022, shows a police car under the rubble as Ukraine said today Russian forces were making a "rapid retreat" from northern areas around the capital Kyiv and the city of