AUSTIN, Texas - Changes could be on the way at a state-sanctioned homeless camp in Southeast Austin.

The lease would go to ATX Helps, a nonprofit made up of faith-based organizations, business owners, community members, the Downtown Austin Alliance and the Chamber of Commerce. They have been trying to raise money to buy property and build a new shelter in the city for several months.

“I am glad that Governor Abbott opened this up,” said Robert Rhodes, who was one of the first people to move into the campsite on an open lot in Southeast Austin. 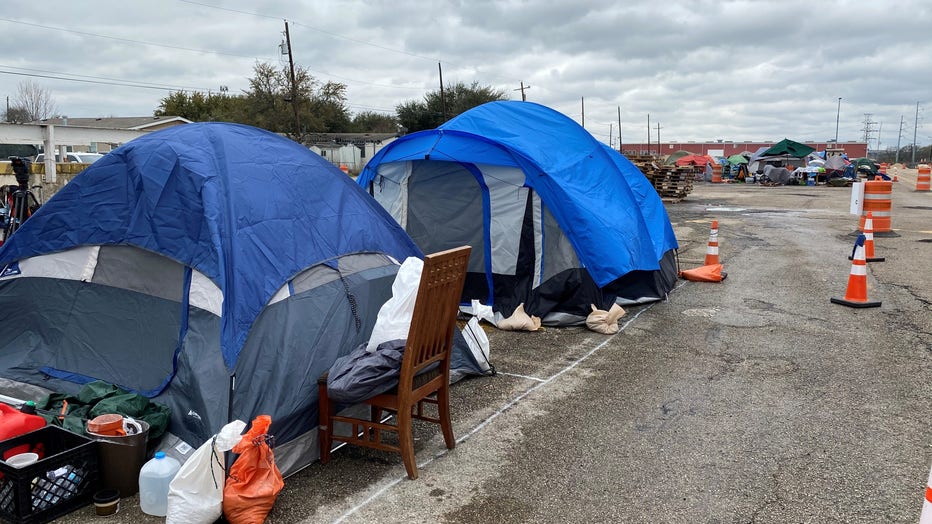 The site has served as a temporary campground for the homeless population for more than three months. Already, about 150 people have moved in.

“With DPS always patrolling around like clockwork, I kind of feel a little bit safer,” said Mouse, who only wanted to be identified by what she calls her street name.

There's some confusion about what will happen to the lot if ATX Helps takes over the property to build what's called a Sprung shelter.

“The initial phase of the shelter project is a tent that will accommodate 150 individuals,” said Dewitt Peart, CEO of the Downtown Austin Alliance.

Peart said the hope is to eventually accommodate 300 people either at one or two shelter locations.

“If I have to move into something like that, I’d rather not. I'd rather go somewhere else or, better yet, get into housing,” Mouse said.

When Austin City Council voted to remove several restrictions on camping, sitting and lying in the city, they said they wouldn't designate a place for people to camp. Instead, they told people where they couldn't.

However, Gov. Greg Abbott had other plans. He made five acres of property off Highway 183 near Montopolis available to anyone without a place to stay. The governor said it would stay open at least until ATX Helps could open a Sprung shelter.

Integral care said the campsite is seen as a safer option than camping under bridges or in the woods.

“Chances are they are going to be the victim of sexual assault. If not just once, maybe a number of times every night, and that is unconscionable. I can't believe we are allowing that to happen, but it happens. And what I’ve been hearing from the ladies at the encampment is that because the DPS presence is there, that there has not been a single rape out there,” David Gomez, Integral Care’s PATH Program manager, said during a city council work session Tuesday.

“They've come out into the public where they are safer. The governor has his campsite set up and there's a DPS trooper there full time. That's probably safer than being under an overpass. I just wish we could put a DPS officer everywhere in the city where we have people experiencing homelessness. We can't. It is safer still to put these people into homes where they can get services and treatment,” said Austin Mayor Steve Adler.

However, waiting for a new shelter and housing is taking longer than anyone anticipated.

“What's taking so long? You made promises to us, but they're not being met. What's the hold-up?” Mouse said.

“Government does not work quickly enough for me either. I don't know what else to do, other than to focus and push it as much and as fast as we can… We need to demand that it moves more quickly,” said Adler.

After requests for additional services, like hot showers, more transportation options and somewhere to cook went largely unanswered, the homeless community at the camp organized into their own kind of city council.

RELATED: Homeless community at East Austin camp creates committee 'for the homeless, run by the homeless'

“We're trying to get everything going here, so we can start a nonprofit organization, so we can accept money and we can buy stuff that we need here,” Rhodes explained.  “We're sick of waiting for them, cause they're not doing nothing. They're sitting there battling back and forth."

“We need more help, because, it's ridiculous. There's so many of us that don't have a place to go,” said Mouse.

To learn more about efforts to better the homeless camp or donate to their cause visit the camp's website.

ATX Helps has raised about $1.5 million so far. They need about $5.5 million before they can construct and operate the shelter. The nonprofit hopes to open it by the summer. To donate to their cause visit ATX Helps' website.