The House passed a bill for DC statehood for the second time in two years on Thursday.

WASHINGTON - The House has passed legislation that would grant statehood to Washington, D.C. after a much heated debate on the floor Thursday.

The 216 to 208 vote followed strict party lines with all Republicans rejecting the statehood bill, known as H.R. 51.

The legislation would create the new state of Washington, Douglass Commonwealth, and would give the District one representative and two senators.

Now, the legislation that has the support of President Biden, moves to the Senate where it faces long odds of passing.

Norton released a statement on the passage of the bill:

"Today’s victory was historic, both for D.C. residents and for the cause of D.C. statehood. For only the second time in history, the House passed the D.C. statehood bill. With Democrats in control of the Senate and White House, and with 54% of Americans supporting the bill, we have never been in a better position to achieve D.C. statehood." 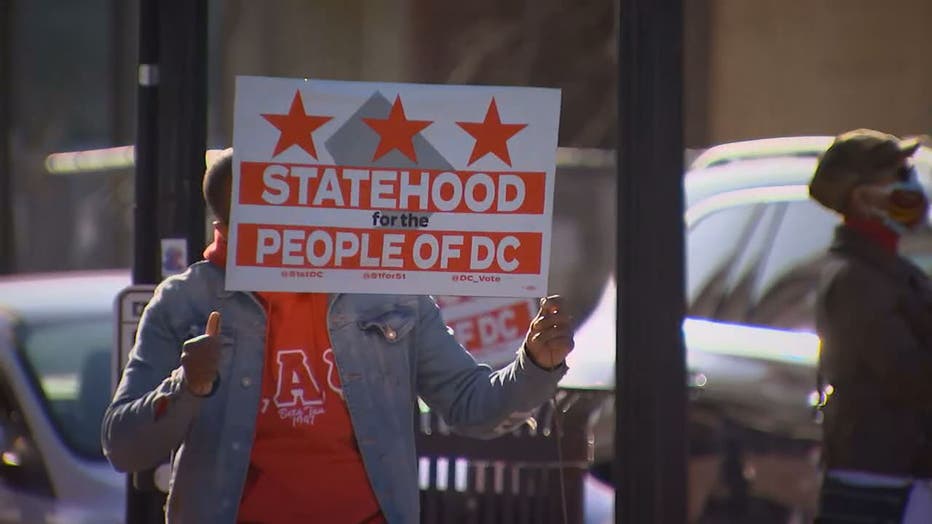 "Today, for the second time in two years, the U.S. House of Representatives has voted in favor of making Washington, DC the 51st state.

"This vote comes at a critical time when Americans nationwide are eager to deliver on the promise of liberty and justice for all. For centuries, an incremental approach to equality in America has delayed this promise for too many. Now is the time for bold action.

"We know well the grave injustices our nation was built on. We also know that progress has been made time and time again because elected leaders and everyday citizens had the courage and vision to demand a more inclusive democracy.

"Today, every member of the House of Representatives who voted in favor of DC statehood made the decision to believe in a stronger, more inclusive democracy. We are especially grateful to Congresswoman Eleanor Holmes Norton who has led this cause for over three decades.

"Now, with historic support and the strong backing of the White House, DC statehood moves to the U.S. Senate. Forty-five Senators have already acknowledged that our nation will be stronger when we end the disenfranchisement of more than 700,000 Americans living in Washington, DC. Frederick Douglass once said, ‘I would unite with anybody to do right and with nobody to do wrong.’ We call on the 55 Senators who have not yet signed on in support of DC statehood to fulfill their responsibility to build a more perfect union and seize this important opportunity to right a 220-year-old wrong."

Attorney General Karl A. Racine released this statement on the passage of the bill:

"Today’s vote is a needed step toward making the District a state. It has also elevated our fight for representation, allowing others across the country to hear our calls for the right to participate in America’s democracy," said AG Racine. "As the District’s chief legal officer, I know Congress has the constitutional authority to make the District a state. In fact, Congress has created 37 new states through legislative action and it has already twice shrunk the size of the federal district. Yet, we remain residents of the only national democratic capital in the world without equal representation and voting rights.

"As the legislation now moves to the Senate, I encourage senators to be courageous and take partisanship out of this debate. Statehood for the District isn’t about scoring political wins by villainizing the District or reducing our quest for representation to merely another partisan game. We’re talking about more than 700,000 real lives. Giving us an equal voice strengthens our democracy.

"The District is a diverse, vibrant community. We have nearly 140,000 children and more than 4,000 teachers. We have more than 76,000 small businesses that employ nearly 250,000 people. Nearly 65 percent of small businesses in the District are minority owned. Nearly 50 percent of our residents are Black and 12 percent of District families live in poverty. Yet none of these District residents have a voting member of Congress. We deserve equal rights and true representation. Yet once again, our rights and freedoms are left to others to decide."

Prior to the bill passing Republicans argued that because the District's establishment is constitutionally based, any change to it must come in the form of a constitutional amendment — not legislation from Congress.

Republicans criticized the move as a power grab by Democrats who hoped to expand their majority in the Senate by adding two more senators from the liberal region.

"Let's be clear what H.R. 51 is all about," said Rep. James Comer, R-Ky. "It's about Democrats adding two new progressive U.S. senators to push a radical agenda championed by the Squad to reshape America into the socialist utopia they always talk about."

D.C. statehood already passed the House last June but died in the then GOP-led Senate. The chances of it now becoming law are better with Democrats in charge of both houses of Congress and the White House. The Senate, however, remains the biggest challenge with the legislative filibuster still in place that requires 60 votes to advance legislation.

The Associated Press and FOX News contributed to this report