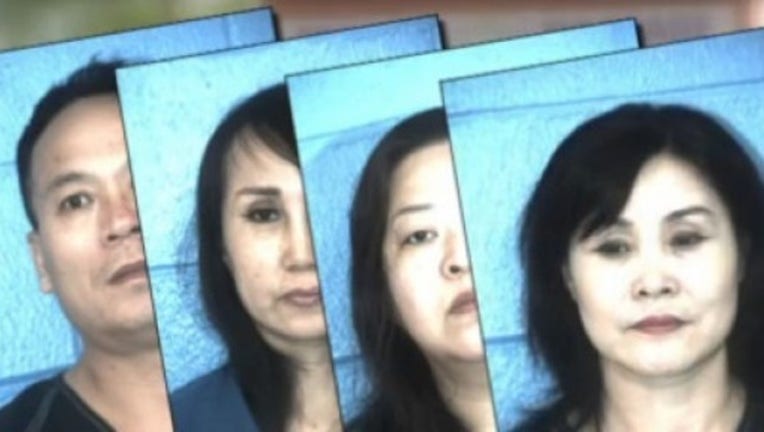 GEORGETOWN, Texas - A multi-agency investigation throughout Texas lead to the arrest of 13 people allegedly involved in prostitution and human trafficking.

The Georgetown Police Department says it all started after they received a complaint about illegal activity at a massage parlor.

"The girls in bikinis, not typically a massage thing," says Sherri Karr who works nearby.

Most of the locations are in Central Texas. Karr works next to Shanghai Spa in Round Rock, which is on the list.

"Male clients that come in, they typically drive very nice cars and stuff like that, business suits, business attire. Not the typical thing I'm used to seeing at my massage salon," says Karr.

Authorities continued to receive complaints: clients coming and going before posted hours, clients staying for short periods of time, alcoholic beverages being brought in, men's clothing hanging outside to be picked up later. The investigation expanded a year later (August 2017). Authorities then realized it was several massage parlors and spas across the state that were linked. The alleged prostitution and organized criminal activity reached Bryan, Round Rock, Houston, Killeen, Harker Heights, Temple and Georgetown.

Agencies in each area and federal authorities worked together at that point to connect the dots. It was last week when those agencies made 13 arrests, where money, assets and evidence were seized.

"The girls were working 12 hours a day, 7 days of week, so they're doing nothing but work. You start figuring out who the drivers are, then we followed them around to figure out who the bosses were, who paid all the bills and that's how you build that chain," says detective.

One man, who wants to remain anonymous, works next to one of the spas and always wondered what was going on.

"The ladies that have been there recently have looked like they didn't like being there. You wave at them and there's no response at all," says man who works nearby.

The 13 arrested could face additional charges since authorities are still looking over surveillance video, financial records and credit card receipts.