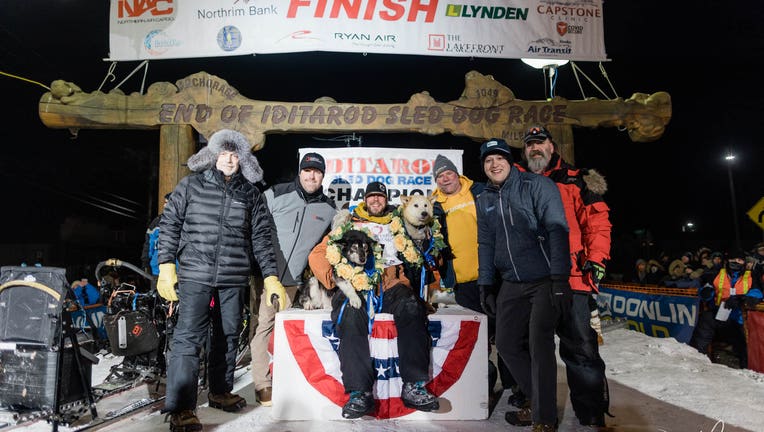 Sass, originally from Excelsior, Minnesota and now racing out of Eureka, Alaska, crossed the finish line with 11 dogs in harness:

Sass crossed the finish line with 11 dogs, but credit goes to all 13 dogs on his team:

What do you get for winning the Iditarod?

This is Sass’ sixth Iditarod finish and first win, which is comes the largest percentage of the $500,000 purse.  Sass also won some very unique prizes along the way for his Iditarod accomplishments, including gold nuggets, 25 pounds of salmon, a gourmet five-course meal and Alaska artwork.

"Brent Sass is not only a bold, tenacious and super tough front-runner but also a keen strategist. In addition, the dedication, emotional connectivity and love for his team is readily apparent as it really felt like his dogs also had abstract thoughts of pride and joy as they crossed the finish line," Iditarod CEO Rob Urbach said in a press release. "After finishing near the top of the pack the last two years, Brent will remember this moment as the moment of his highest power. We congratulate Brent and his team of fearless canine athletes on winning the 50th running of the Iditarod and look forward to seeing him grow along with our race as we enter our next 50 years."

From Iditarod: "Brent was born and raised in Minnesota but moved to Alaska over 20 years ago. After falling in love with the trails of Eureka, Alaska, Brent took over a homestead established in the 70s and where he has lived with his dogs since 2012. He is a three-time Yukon Quest (1000-mile) Champion (2015, 2019 and 2020) receiving the Vet’s Choice award for his dog care in 2015 and 2019…Mushing is a way of life for Brent – it gives him a chance to get out and explore Alaska, but most importantly it is all about the dogs and the relationship he has with each and every one of them. Getting to know each dog’s behavior and personality is what makes dog mushing such an adventure. Every day is exciting, whether it is traveling on a new trail or learning something new about the dogs. Living his dream and setting and accomplishing goals is what drives Brent every day, along with all of his incredible fan support."