The journey to president-elect was a long and winding road for the former vice president.

WASHINGTON (AP) - Some dramatic moves on immigration are expected in the early days of the Biden administration. Joe Biden will likely use executive orders to reverse some of President Donald Trump's most controversial actions, rolling back moves that were a central feature of his administration and important to his base.

The Biden administration plans to restore protection for people brought to the U.S. illegally as minors and stop using Pentagon funds to build a border wall. Biden unveiled a detailed, highly ambitious plan on immigration, but it will take time to undo many actions taken by Trump.

The incoming president will also likely face a divided Congress, making it difficult to enact any kind of sweeping, comprehensive changes to the nation's immigration system. Here’s a look at what to expect:

A CHANGE OF TONE

Restricting immigration was a signature issue for Trump, who infamously called Mexicans rapists as he pledged to build a border wall in launching his campaign. His administration banned travelers from some predominantly Muslim countries as one of its first acts, took many steps to limit legal immigration and cut the number of refugees allowed in the country by 80%.

Biden has said “immigration is central to who we are as a nation,” noting that most Americans can trace their ancestry to immigrants, but it isn't a core issue. It's not even mentioned on his transition website’s top priorities: COVID-19, economic recovery, racial justice and climate change. 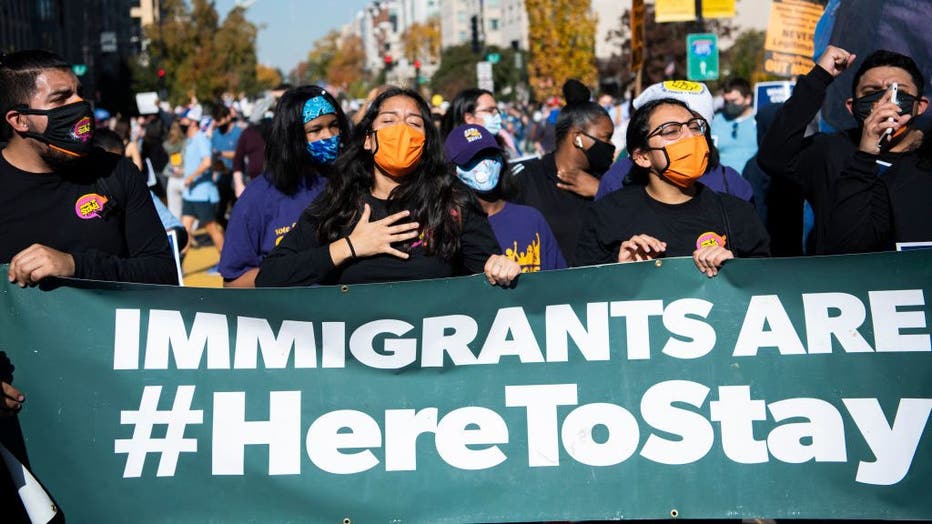 Biden has said he will move quickly to undo some of Trump’s signature immigration initiatives. The border wall? The roughly 400 miles (644 kilometers) built so far won’t come down but the new administration won’t keep building it or taking money from the Pentagon to fund it over the objections of Congress.

The incoming administration plans to reinstate the Deferred Action for Childhood Arrivals program, which currently shields from deportation about 650,000 people who came to the country when they were young. He plans to overturn the travel ban on people visiting the United States from 13 countries, many of them Muslim-majority.

One of Trump’s first moves in office was to tell immigration officials that everyone in the country illegally was subject to deportation. Biden is expected to return to criteria similar to what Obama adopted toward the end of his tenure, largely limiting deportations to people with serious criminal records in the United States.

Biden said he wants the government to help find parents of hundreds of children who were separated from their parents at the border early in the Trump administration.

Biden wants to get rid of policies that have been “detrimental” to seeking asylum — such as the policy to make asylum-seekers wait in Mexico for hearings in U.S. immigration court — but he is expected to move cautiously to avoid triggering more arrivals.

Rep. Veronica Escobar, a Texas Democrat who was a Biden appointee to the joint immigration task force with Bernie Sanders, said a resolution will require coordination with Mexico.

“This is a moment that’s going to require true leadership,” she said.

WHY SOME CHANGES WILL TAKE TIME

Nearly every major policy change under Trump is in court and may take effort to disentangle, including considerations of protecting executive power. Other reversals would be subject to formal rule-making procedures that require time.

Stephen Yale-Loehr, a professor of immigration law practice at Cornell Law School, thinks Biden will move cautiously on asylum to avoid setting off a new wave of arrivals and says other changes will face “procedural and practical problems.”

Take the “public charge” rule, which disqualifies more people from green cards if they rely on government benefits. Biden wants it reversed but would need to go through the extensive, rule-making exercise. A federal appeals court sided with Trump on ending humanitarian protections that have allowed hundreds of thousands of people from El Salvador, Nicaragua, Haiti and Sudan to remain in the United States. Biden says only that he would order an “immediate review” of “Temporary Protected Status.”

Yale-Loehr, a strong critic of Trump’s policies, says it is “going to take four years to undo all the damage that the Trump administration has done” while Biden attends to the pandemic and other issues.

WHAT COULD STAY THE SAME

At least initially, Biden may keep in place a Trump administration order that authorizes Customs and Border Protection to quickly expel any migrant as a public health measure during the COVID-19 pandemic.

Even though critics question the health justification for the order, the new administration may decide it’s necessary to avoid a rush of migrants and to protect Border Patrol agents and other CBP employees, says Doris Meissner, a former senior U.S. immigration official now with the Migration Policy Institute.

“This health circumstance is not likely to just disappear come January or February,” she says.

Biden says he will “commit significant political capital to finally deliver legislative immigration reform," which would be necessary to fix problems with the American immigration system and resolve the fate of millions of undocumented people living in the U.S. That's a long shot, at best, with the divided Congress. President George W. Bush called for a big immigration bill, to no avail. Obama pushed for one as well, and it died in the House.