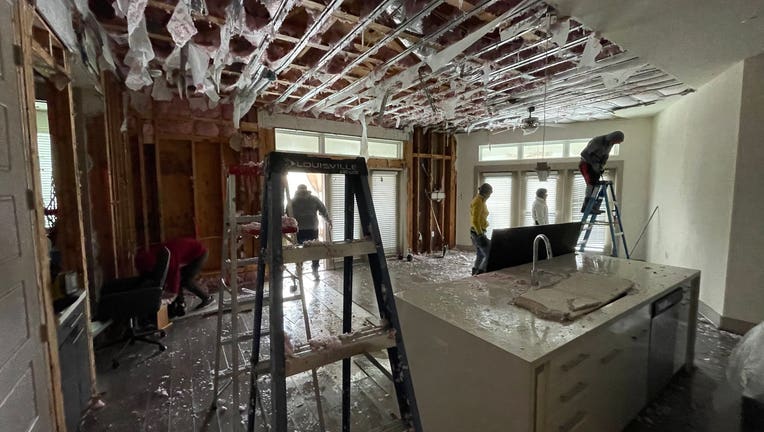 DALLAS - You should know your rights as a tenant, especially during the pandemic and after the Texas winter storm.

Consumer reporter Steve Noviello hosted an interactive live chat Wednesday morning on Facebook with two experts – one advocating for tenants and the other for landlords.

Click here to watch the full question and answer segment.

One of the biggest issues many renters face is property condition. Many people have said they are still without hot water. Others said their apartment is now dry but was flooded, leaving behind buckling floors and wet walls.

One man sent Steve a picture of his apartment which had been completely gutted to the studs. He was displaced and the property management told him his rent was still due.

So what are renters’ rights in situations like these? Can you break your lease if your apartment is unlivable? Is your landlord obligated to relocate you? And what about your security deposit?

Jennifer Owen, an attorney and member of the Texas Apartment Association, and Maryann D’Aniello, an attorney with the Legal Aid of Northwest Texas took the time to answer those types of questions from viewers.

"There’s been a significant amount of damage and we’ve received a lot of phone calls from tenants and applications wanting to know what their rights are and what the landlord needs to do with regard to repair," D’Aniello said.

At the same time, Owen said many landlords are struggling to cover the costs of repairs after an already difficult year. It’s also been difficult for them to get supplies and skilled repair workers because of the demand.

Q: My apartment complex is not doing anything about rent or giving us updates and we still do not have hot water. Do I have to pay rent?

"The short answer is yes. Your rent is still due. The landlord is not required to give an automatic reduction or proration of the rent because repairs are necessary or the lack of utilities. The longer answer is that if as a practical matter the dwelling is no longer habitable, the tenant does have the right – or the landlord – either one has the right to terminate the lease and move," D’Aniello said.

Moving may be difficult for many tenants but they do have the right to do so if the apartment is unlivable.

As for the rent, unless a county or district court issues an order for a rent reduction or proration, it’s still due in full. Tenants can try to make an agreement with their landlord but the law does not give them the right to just stop paying rent.

Q: Can my landlord evict me for being late? I’ve had a hard time making enough to pay rent. I am self-employed and COVID and the weather had a lot of hardships on me. But he is still threatening to evict me and charges me a ton of late fees.

Owen said the answer in part depends on where you live. For example, in the city of Dallas, there is an ordinance that requires landlords to give notice of possible eviction for non-payment of rent.

"It’s sort of a pre-notice and that gives the tenant the opportunity to let the landlord know about a financial hardship related to COVID and hopefully make payment arrangements. Once that time period has expired, evictions can go forward but there is also a CDC moratorium form and that’s in effect through March 31," she said.

Tenants can sign the simple form and declare under oath that they meet certain requirements such as financial hardship due to COVID-19 or that eviction would make them homeless.

"If they complete that form and provide it to the landlord then their eviction should be put on hold through the end of March," Owen said.

D’Aniello said there is a legal eviction process landlords have to go through. The only person who can legally force a tenant out is a judge.

"A lot of tenants think the landlord can just say or give them a notice to vacate which is the first step in the legal process of the eviction. So what a tenant should do if they receive that notice to vacate or a demand for payment is to reach out to legal aid or go to TexasLawHelp.org so that they can understand their rights and the process," she said.

Q: My daughter’s apartment flooded. They refused to give her a new unit, released her from her lease but won’t reimburse her for half of her February rent.

The Texas Property Code states that if the premises are not useable then either the landlord or the tenant can terminate the lease. Under state law, there is no obligation for landlords to provide tenants with a new apartment.

"Many owners have been willing to transfer. If they had vacant, undamaged units on site they would love to keep people as a resident and they would offer to transfer. But they might not have a unit available. So there’s not an obligation to transfer to a new unit," Owen said.

If the lease is terminated, tenants should get their security deposit back and they should get a pro-rated rent refund for whatever portion of the month they had paid for, she said.

Owen said state law also doesn’t require landlords to provide temporary housing like at a hotel but some cities do have municipal ordinances that require it. Those ordinances also have an exception for when it’s beyond the reasonable control of the owner.

"And I think that’s why this has been so frustrating for so many. This was – and I know we don’t like that word historic – but we had a failure of our power grid that our legislature is looking at. We had the president is declaring a disaster declaration. So the idea that individual owners were in control of circumstances that were affected by these other things may not be realistic," she said.

Another part of the property code that may be frustrating for tenants is the part that gives landlords the right to delay repairs if it is a casualty loss that is covered by insurance until they receive insurance proceeds.

Under normal circumstances it is considered reasonable for repairs to be completed within seven days. But D’Aniello said these aren’t normal times.

"This does not happen when there is a casualty loss of this magnitude," she said.

Q: My apartments still won’t let me out of my lease even though I didn’t have water for 2 ½ weeks and they have still done nothing to come fix the apartment. The carpet is STILL wet and the place smells extremely bad and there’s still no hot water.

The Texas Property Code does allow tenants to break a lease if an apartment is unusable.

"So when you are getting into a situation where you still don’t have hot water, you still have water logged carpet and walls, I think the tenant may have an argument here that they fall into that totally unusable category," Owen said.

The same isn’t true if an apartment is partially unusable. Tenants may not be able to break their lease if for example the unit is now dry and has running water again. It may be considered partially livable even though the floors are buckling and the drywall has been removed.

"We’ve been focusing a lot on the part of the property code that says when there is a right to terminate but there’s also this obligation that landlords have to make repairs within a reasonable time. And as [D’Aniello] pointed out there is this presumption that seven days is a reasonable time. But in a disaster of this scope it could be longer," Owen said.

In the situation above, D’Aniello would suggest that the tenant send a letter by mail using a tracking service – not a text or email – to terminate the lease citing Section 92.054 of the Texas Property Code. Then the landlord can respond if they disagree.

"A lot of times the landlord will say hold on. They don’t want to do it. But you can say, ‘You know what, it’s been 2 ½ weeks and this really isn’t livable. It’s no longer usable,’" she said.

If the landlord continues to argue that it is liveable, D'Aniello said the tenant could file a repair suit in justice court in order to get in front of a judge generally within about a two-week time frame. A judge would make a ruling on whether it is uninhabitable. The other option is to simply send the termination letter and keep all the documentation to dispute any future claims in court or lawsuits with regard to what is owed.

To hear more of what the guests had to say, visit Steve Noviello or FOX 4 News on Facebook.