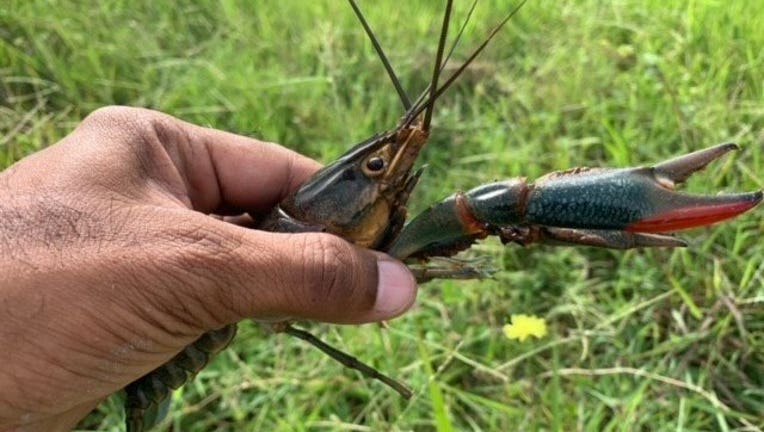 Australian Redclaw Crayfish grow rapidly and can reach maximum size, up to two pounds, in under a year. These large crayfish can significantly alter habitat and vegetation, competitively exclude native crayfish, and impact native fish communities by

This is just the second detection of this species in the wild in the United States with the other being in California.

Both male and female Australian Redclaw Crayfish have been collected, so the potential for reproduction is a concern in these waterbodies. The species can reproduce prolifically, with females brooding up to five times a year at 1,000 eggs per clutch.

Australian Redclaw Crayfish, along with all other members of the crayfish Family Parastacidae, are prohibited exotic species in Texas and cannot be legally purchased, sold or possessed in aquariums. It’s also illegal to release these crayfish into a public waterbody.

Australian Redclaw Crayfish are identifiable by their large size, large left claws with a red patch on the outer edge and the presence of four distinct ridges on the top of the head.

Sightings of Australian Redclaw Crayfish should be reported to TPWD by emailing photos and location information to aquaticinvasives@tpwd.texas.gov.

To learn more about alternatives to release of aquarium life, visit the Never Dump Your Tank website.