Jillian Schnerch may have just won Halloween with a costume that's way too real.

ALBUQUERQUE, N.M. - A 13-year-old who comes from a family of nine children came up with a "tired mom" Halloween costume that has countless parents howling with laughter — including her own.

Jillian Schnerch created the look after years of watching her mother, Lindsay Hartsock, juggle the massive set of responsibilities that come with raising nine children, and she got the look down perfectly, down to the smallest details — including a few lose Cheerios in her hair, fake spit-up dribbling down her shirt, a nursing pad tucked into her shirt and a baby doll fastened around her ankle as if clinging to her leg.

Hartsock, who is a professional photographer, did a photo shoot with Jillian to capture the incredible level of detail and thought that went into the costume, while Jillian fully assumed the persona of her tired mother.

"When she came downstairs like this I couldn't stop laughing!” Hartsock wrote in a follow-up comment on her post. “She was in full character and it was so entertaining." 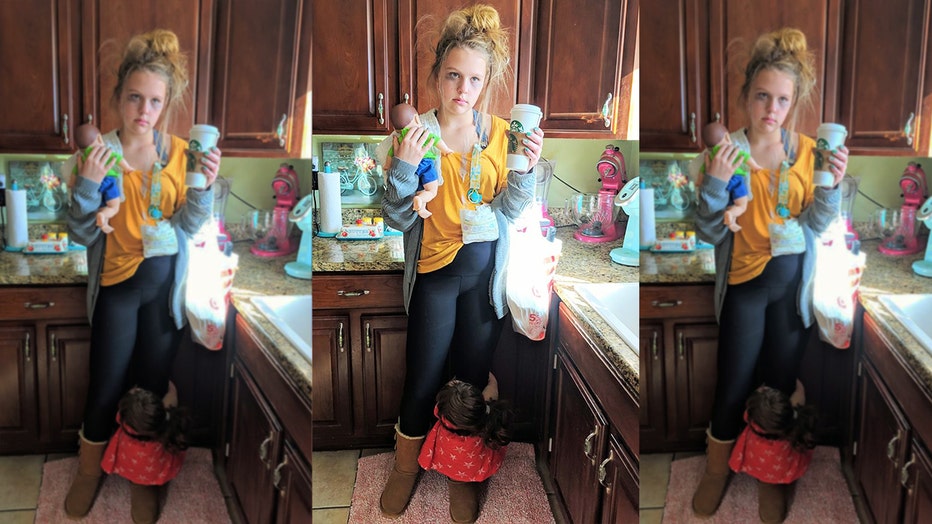 Jillian Schnerch, a 13-year-old from a family of nine children, designed a "tired mom" costume that has countless parents howling with laughter. (The Hartsocks' Photography)

The photos were posted to the family’s photography page on Facebook, The Hartsocks’ Photography, where it has since been shared over 77,000 times.

Thousands of parents sounded off in the comments about their favorite aspect of the costume.

"The nursing pad sticking out of her bra is so relatable," one person wrote.

"The doll tied to her leg is freaking GOLD," said another.

The Hartsocks were surprised to see how quickly the post went viral and how many people reached out to share personal stories or to ask for more details.

"Aww! Thank you so my friends! She is going to love reading your comments! <3," the Hartsocks wrote in a comment, adding, "In her Target bag she had diapers, wipes and three bottles of wine. She totally put a lot of thought into this role."

“I wonder if she got a white mocha with soy milk because her baby has reflux and a dairy sensitivity!?” another mom wondered.Without missing a beat, the Hartsocks chimed in, “She totally did! And she ordered decaf because her baby doesn't sleep as it is.”

For many moms, the costume couldn’t have been more accurate.

"I legit thought this was me," one mom commented. "From the yoga pants, spit up, Starbucks cup to the Target bag. She literally NAILED IT!! and cant forget the nursing pad."

"Okay, but I want to know why she decided she should dress like me for Halloween. lol," wrote another.

"Thank you so much for being so kind to Jillian! We took these on her 13th birthday," the Hartsocks wrote after all the love came pouring in on their post. "We have received so many wonderful, amazing and kind comments and messages about her photo! We are excited that so many of you can relate loving so much your kids, but being totally exhausted at the same time."