New guidelines, restrictions on the table if Austin moves to Stage 5

If the City of Austin moves into Stage 5 of the COVID-19 risk response, Mayor Steve Adler says several new guidelines and restrictions are on the table.

AUSTIN, Texas - For the second day in a row, the weekly average for hospital admissions is at 50, the trigger point for moving Austin into the stage five COVID-19 risk category.

However, the Austin Public Health authority says they will watch the data for a few days before making a decision on changing stages.

"Unfortunately, the key indicators for risk stage changes, including the 7-day moving average of hospitalizations, number of patients in the ICU, ventilator use, positivity rate, and 7-day moving average of cases are all trending upward. The next couple days of data from the key indicators dashboard and the projections from the UT Modeling Consortium will be critical as we consider moving stages, and we will be closely monitoring the trends.

Throughout this pandemic, Austin-Travis County kept our COVID-19 numbers comparatively low not by accident or luck, but through community engagement and action. Once again, the actions we take in the coming days and weeks can either move us in the right direction or in the direction of a deadly surge like those we have seen across Texas."

A spokesperson for Travis County released a statement that reads, "Travis County Judge Andy Brown is still consulting with Dr. Escott to see what additional recommendations he has for restrictions or recommendations that would help reduce the transmission of COVID-19." 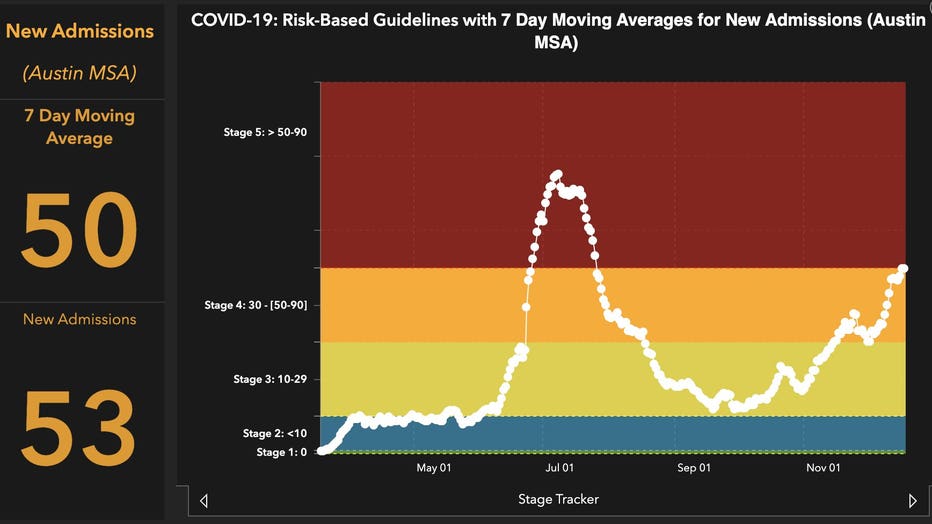 For the second day in a row, the weekly average for hospital admissions is at 50, the trigger point for moving Austin into the stage five COVID-19 risk category.

If the Austin area does move to Stage 5, Mayor Steve Adler says several new guidelines and restrictions are on the table, including:

"I think that when you're seeing a spike, and if we go to Stage 5, we'll do it because we're in danger of having our ICUs overrun. And we won't do it unless and until that seems to be a substantial risk," said Adler.

Adler said there's also the possibility of a more focused curfew. "There's been some discussion about doing a curfew at least on New Year's Eve, so that we don't have a lot of people out that night," he said.

The Texas Restaurant Association said it seems like suggested restrictions specifically target restaurants, which they fear will only lead to more gatherings in less-regulated places.

"We don't have data suggesting that they're part of the spread, we certainly don't have data indicating that they're part of the spread at certain hours of the day and yet the knee jerk to increased cases always seems to be restaurants," said Kelsey Erickson Streufert, vice president of government relations and advocacy for the Texas Restaurant Association.

"It's not a good idea to gather with people. Now, it just so happens that people do that mostly in restaurants and in retail, and that's why the rules address that, but we're also encouraging people not to go to their friend's house for a gathering and a party," Adler said.

RELATED: Over 110K restaurants nationwide closed due to COVID-19 pandemic

"I don't think very many restaurants are going to close or go take out only... It's just completely unsustainable from a financial perspective, and they cannot afford it," Streufert said.

Over 110K restaurants nationwide closed due to COVID-19 pandemic

According to a survey from the National Restaurant Association, 17% of restaurants have closed and it predicts 10,000 more will close by the end of the year.&nbsp;

Restaurant owners said the threat of more guidelines from the city is especially frustrating after the mayor ignored his own advice to stay home if possible in early November.

"I made a mistake and I apologize, but people need to take the rules and their behavior in a way that is best associated with trying to keep the community safe with saving lives," said Adler.

The mayor said he is also encouraging people to order takeout from restaurants as often as possible and leave a bigger tip than usual to help offset the impact of restrictions.