Fourteen-year-old Charlie Kobdish doesn’t really care if people call it a pee-can or a puh-kahn, as long as they are buying. And they are buying big time. He turned his childhood passion into a successful pecan business.

DALLAS - A 14-year-old North Texas boy started his own business and has tasted sweet and spicy success off pecans.

Charlie Kobdish’s business model is totally nuts. But that hasn’t stopped him from cashing in.

"We’ve got cinnamon sugar, the sweetest flavor. Definitely my favorite," he said. "Pecans seem to be a big thing in Texas and a unique thing." 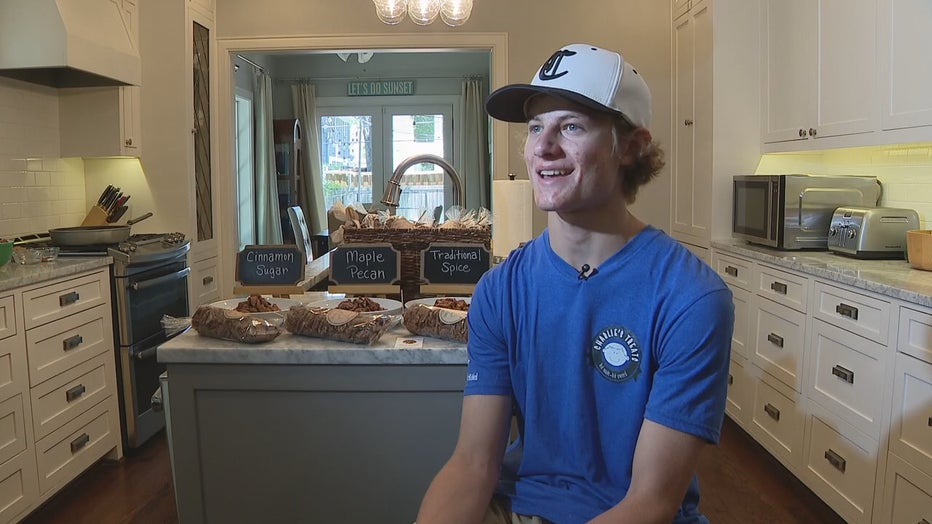 Charlie’s Treats as they’re called cost $8 for a 5-ounce bag or $15 for 10 ounces. Throw in a few awards, spread in some popular press and it’s all far more fanfare than even 10-year-old Charlie could have imagined.

He officially opened to his first customers four years ago with a ribbon cutting at his bedroom door.

"It’s gotta be my parents. I think they were my first customers for a solid six months at least," he said.

Now Charlie’s Treats is so successful that it’s governed by the rules of the health department, which require Charlie to work out of a commercial kitchen.

He points to his parents as the foundation for his motivation.

"Even with all of the passion in the world, I couldn’t do anything without them," he said.

But not all flavors have been a success.

"We tried to do a bourbon maple pecan which sounded amazing and just did not work. We couldn’t figure it out," he said.

What he has figured out is a way to go from a passionate and curious kid to a pecantrepreneur.

Charlie also donates 5% of his profits to a different local charity each year.

He said his biggest seasons are Thanksgiving and Christmas and yes, he does ship. To place an order, visit charliestreats.co.

You can find links to more than 100 other kid-run businesses in North Texas when you visit consumer reporter Steve Noviello at facebook.com/savemesteve.