The twins say they’ve only recently been able to feel comfortable speaking about the alleged abuse. They hope this civil lawsuit makes the sport they love a safer one for all athletes.

22-year-old Jessica and Hannah Gerlacher, who are national-level cheer athletes with a large following on Instagram, say the abuse started in 2015 at the Cheer Athletics facilities in Plano and Frisco.

"We decided to come forward so no other child would experience what we went through," Hannah said. 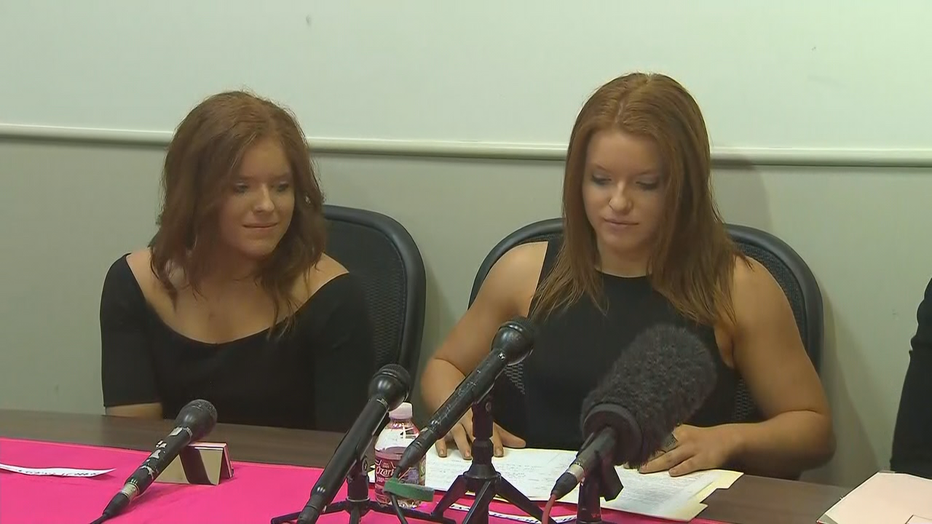 "They were sexually abused at the actual gyms while they were there for training purposes," said attorney Michelle Simpson Tuegel.

FOX 4 is not naming the coach listed as a defendant since it's not clear at this point if he is facing any criminal charges.

The lawsuit claims a male coach used the pretense of "spotting" the twins as an excuse to touch their breasts, crotches and buttocks, and to push his erection against them.

The coach also instructed Hannah to sit on his lap, where he would fondle and touch her genitals, the lawsuit claims.

Hannah was allegedly targeted more severely after a head injury.

"Like most survivors of sexual abuse, it took us a lot of time," she said. "But in the past few months, we came to a place where we could deal with it and decided to report to the sport and nobody contacted us and nobody did anything about it."

The civil suit names the defendants as the male coach, Cheer Athletics, and the US All-Star Federation, the rulemaking-body governing cheer and dance competitions through privately-owned gyms. It alleges gross negligence for failing to protect minor athletes.

The lawsuit says the girls made an anonymous online report to USASF naming their coach as their abuser, but the organization failed to follow up. They also say they’ve reported it to Frisco Police.

"Similar to the sport of gymnastics, they prioritized profits over our safety," Hannah said.

The sisters say they were inspired to come forward after nationally recognized gymnasts shared their stories of abuse.

Tuegel is one of the attorneys who sued and won settlements on behalf of gymnasts in other high-profile cases.

The sisters, who are currently cheer coaches in the DFW area, say they hope to enact change in a sport they love and not dismantle it.

"We were inspired by those who have come before us, and we hope to make a long-lasting change in the culture of cheerleading," Hannah said.

Last year, Cheer Athletics was named in a separate lawsuit that accused Jerry Harris, a star on the Netflix series "Cheer," of asking underage boys for sex and sexually explicit pictures.

The organizations have not yet responded to FOX 4’s requests for comment.

FOX 4 reached out to the coach listed as a defendant, the USASF and the Frisco Police Department to get an update on their investigation, but so far no responses.

"Cheer Athletics is aware of the allegations made today by Hannah and Jessica Gerlacher and their counsel of purported sexual misconduct by [the male coach].  Cheer Athletics remains steadfast in its commitment to athlete safety, including any improper contact between athletes and coaches and has an established track record of taking swift action to address such allegations, including making mandatory reports to law enforcement.  In this instance, the Gerlachers never made Cheer Athletics aware of their allegations against [the coach] during their years as athletes or in the nearly six years since they left the program.

Since Cheer Athletics has yet to receive a copy of the lawsuit filed by the Gerlachers, it still has little information at this time regarding their specific claims.  Nevertheless, we have acted quickly today to determine that [the coach's] interactions with the Gerlachers were limited to team practices and optional tumbling lessons, during which time they would have always been in plain view of dozens - if not hundreds - of athletes, coaches and parents.  [The coach] adamantly denies any wrongdoing of a sexual nature or otherwise in his dealings with the Gerlachers.

While Cheer Athletics was notified by USASF in September 2020 that it had received an anonymous report against [the coach], the report did not disclose the name of the individual filing the complaint or provide any contact information for the athlete(s) involved. The information provided in the report was somewhat vague and also unclear as to when and where these events occurred.  In keeping with its practice, Cheer Athletics immediately launched an investigation in September to determine if the complaints could be substantiated and worked with USASF to provide any and all information it requested to conduct an independent investigation.  Cheer Athletics was not able to corroborate any of the allegations made in the anonymous report, nor has it been notified of any findings made by USASF.  Cheer Athletics assumes that this is the report referenced by the Gerlachers’ counsel, as it has received no other reports from either USASF or any other individual or third party about [the coach].

Cheer Athletics is the industry leader in every way on the mat and off the mat.  It strives to set the standard and make All Star Cheer a safe place for all athletes.  Simply put, athlete safety is our top priority.  To that end, [the coach] has been subject to multiple background checks during the time that he has been affiliated with Cheer Athletics in any way.  Every coach, team representative, parent, choreographer or music producer is also required to have a USASF background check in order to work with our teams.  In addition, [the coach] and all other Cheer Athletics employees are required to participate in regularly scheduled training sessions which include prevention of sexual abuse, social and physical warning signs of abuse, and reporting processes.

Cheer Athletics will continue its investigation into the Gerlachers’ allegations as more information is provided, and will vigorously defend itself to the extent any such claims are found to be without merit.  Of course, Cheer Athletics also stands firm in its policy to take swift action in the event that evidence of a violation of law or company policy is discovered."