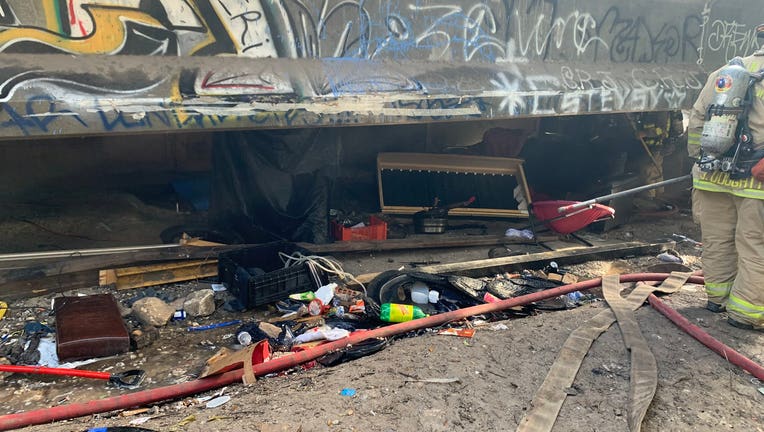 AUSTIN, Texas - A homeless camp located near Highway 183 and Anderson Lane was recently cleared and according to city resource officials over 100 tons of trash has been collected from the site.

The cleanup began on February 21 at a homeless camp that sits under a bridge at Highway 183 and Cameron Road on February 21. The emergency clean up followed two fires that had previously erupted at the site.

The scene backed up traffic for hours and AFD says it's been called to the location several times before. FOX 7 Austin's Bridget Spencer has more from Anderson Lane and Cameron Road.

FOX 7 Austin reached out to the three organizations that assisted with clearing the site and learned that altogether the organizations removed approximately over 100 tons of trash from the site.

The department estimates that each truck carries six to seven tons fo trash, totaling over what they believe is over 50 tons of trash.

Workers with Austin Resouce Recovery spent all day on February 21 picking up items including bicycles and wheelbarrows.

After the fires, TxDOT brought in an inspector to assess if there was damage to the bridge but there were some issues due to people's belongings and trash in the way. TxDOT was able to finally assess and found no issues with the bridge.

“This is one of those sites that we discovered that we didn't know a whole lot about and then, once we learned more about it in terms of the scale and the level of debris there, we moved in to do an assessment,” said Ken Snipes, director of Austin Resource Recovery.